Adapted from Aravind Adiga's 2008 novel and written for the screen and directed by Ramin Bahrani (Man Push Cart, Fahrenheit 451), The White Tiger follows low-caste Indian striver Balram Halwai (Adarsh Gourav), who dreams of success. The film's setup finds Balram, now an entrepreneur, emailing Chinese Premier Wen Jiabao as he explains his life's trajectory, which we hear in voiceover narration. Proficient in English and good in school, Balram was told as a child he is a white tiger, someone who comes along once in a generation. He hoped to be educated further but instead his grandmother sent him to work breaking coal in a tea shop. He eventually saw his big chance when the son of the village landlord needed a chauffeur. Believing this was his path out of poverty, Balram relished his new job but quickly learned his caste wouldn't change and neither would his future unless he took matters into his own hands. (125 min.) 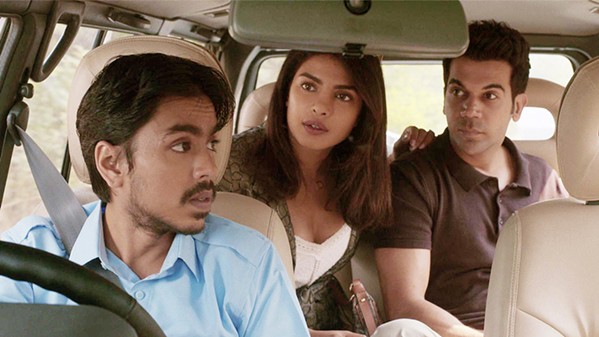 Glen India is a mystery to me. I've never visited, so I don't really know how the caste system plays out in the modern world. It seems very anachronistic, but according to this story, it's alive and well. As a boy, Balram demonstrated the raw intelligence to be offered a scholarship to a school in Delhi, but because his family was too poor to pay off village landlord The Stork (Mahesh Manjrekar), he couldn't go. Years later, now a young adult, he works as a driver for The Stork's youngest son, Ashok (Rajkumar Rao) and his wife, Pinky (Priyanka Chopra-Jonas), who behave much more progressively than the other Indians we meet, such as Ashok's older brother, Mukesh "The Mongoose" (Vijay Maurya), who never lets his servants forget their place. Society has trained Balram to be a subservient, and we watch as he discovers this corrupt system is designed to keep him down. He equates his situation to chickens held in cages to be slaughtered. They know they're next, but they do nothing to escape, resigned to their fate. Eventually, he realizes how little he means to his employers and how utterly disposable he is. This is the story of a cunning young man who learns to be as ruthless as his masters.

Anna It's a fascinating peek into the caste system, very different from the American ideal that you can become whatever you want no matter what station you're born into. Balram dreams of more, yet his lot in life seems to always be the used and abused servant. It's almost as if his masters have a doll to play with—to treat however they feel at the moment, to dress up, to pretend to be a playmate, and to abuse all in the same day. When Balram is hired as "second" driver, he realizes that even though he got hired for the job, he's playing second fiddle to the first driver who gets more respect and money. This is when we first get a glimpse into what Balram is willing to do to move up the ladder, even when it isn't particularly nice. The character is very sweet, and an innocent quality shines through, but he's also saddled with the deeply embedded belief that he is less, which won't go away. It's frustrating to watch a bunch of rich assholes use him, but in the end we get to see him triumph, which makes it all worth it.

Glen I don't know if it was worth it. He may have gained money and power, but he lost his soul. I think that's the point: The story is an indictment of a system that's designed to curtail upward mobility. His intelligence should have awarded him more education, his education a good job, a good job success. Instead, he had to unlearn his programming as a good slave, but in doing so, he corrupted himself. I've no love lost for The Stork and his family, but Balram ends up turning himself into what he hated. At one point Balram seethes at the idea that India is the most populous democracy in the world. He knows there's no self-governance in India as long as there's a caste system that keeps the poor in their place. We like to believe that the U.S. is a place of limitless possibilities, that anyone can rise beyond their station in life, but the truth is we're ranked 27th on the list of most socially mobile countries behind places like Slovenia and Portugal. That's certainly better than India at 76, but maybe it's better to have a caste system out in the open instead of hidden as it is in the U.S. Balram is ultimately victorious, but his is a Pyrrhic victory.

Anna I guess what I mean by "worth it" is that yes, he doesn't end up the good guy he starts off as, but he does find a way to become more than a servant who spends his days literally oiling the feet of those in power. It ruins the part of his character we're rooting for though, I'll agree with that. Pinky is an interesting character too—an American chiropractor who is at first disgusted by the way her husband and his family treat their servants but who in the end becomes a user just like the rest of them. It doesn't cast a nice light on anyone really, and the law of attraction is in full force. Greed attracts greed, corruption attracts corruption, and on down the rabbit hole. Watching a white tiger pace back and forth in its tiny cage, trapped and unable to make an escape, is a wonderful visual for Balram's story, just like the chickens awaiting their fate. It's definitely a great socio-political commentary on the rich/poor divide in India and a cynical take on what's required to rise to the top. I'm putting this book on my reading list; I bet it's every bit as good as the film. Δ