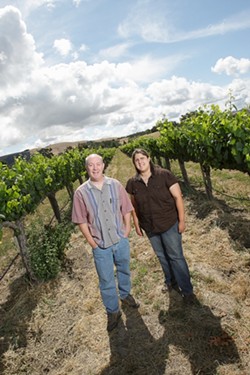 It’s well off the beaten path but only a short drive to one of SLO County’s best known and favored wineries, Wild Horse. And whether you’re a tourist or a local, you can’t help but appreciate the picturesque drive along Templeton Road from Vineyard Drive. The long, winding road takes you past ranches where magnificent horses graze in pastures in front of equestrians’ homes. Founder Kenneth “Ken” Volk named the winery for the many horses in the area, and it was likely a nod to Cal Poly when Volk put that mustang on the label. An advocate of the university, he has always supported their enology and viticulture program.

Wild Horse was considered quite modern in 1987 when the winery was built among the grapevines Volk planted in Templeton. It was also fairly large compared to its counterparts and expanded rapidly thanks to its popularity. Volk has always been renowned and admired for his love of obscure varieties like Verdelho, Malvasia Bianca, and Blaufrankisch, among many others. Even after selling Wild Horse, Volk now makes an array of varieties at his new Kenneth Volk Vineyards in Santa Maria Valley.

He sold his original winery to Constellation, a powerhouse of brands that includes such great names as Mondavi, Simi, Clos du Bois, and Ravenswood. Wild Horse was another thoroughbred in their stable of winners. Yet it seems a part of Volk’s spirit for finding special vineyards and rare varieties remained at Wild Horse and influenced the new winemaking team.

It’s now led by director of winemaking Clay Brock, whom I first met when he worked at Byron winery, assistant winemaker to Byron “Ken” Brown. When he moved to Edna Valley Vineyard as winemaker I soon became his fan. Born and raised in Napa Valley, Brock’s father was a viticulturist who managed Christian Brothers’ St. Regis Vineyard. He taught his young son the importance of high-quality vineyard management to produce fine wines. Brock left Napa to earn his degree in Agricultural Business Management at Cal Poly.

I’ve also been among Brock’s many fans of his private label, Trou du Bonde. I was sorry to learn he’s not going to be making his awesome Grenache Blanc under that label, but wine lovers can expect many good wines to come while he’s at Wild Horse—a fact that was immediately obvious when I tasted his new lineup of 2008 white wines for Wild Horse, especially his Malvasia Bianca, a standout white that’s one of the best I’ve tasted of this varietal.

Winemaker Chrissy Wittmann, who started at Wild Horse a year before Brock, told me: “It’s been fun working with Clay. He’s very much appreciated for his mellow demeanor.” Originally hired as assistant winemaker to Mark Cummings, when he left to establish his own brand she was promoted to winemaker. When Brock came on board as director of winemaking, he admitted he wondered if the staff would have some animosity: “Most of the old staff was gone and the employees let me know they were happy I was here.”

Wittmann had nine years experience in the business before joining Wild Horse. She started at Scheid Winery in Monterey County, near King City, a large production winery and vineyard. She also worked at Courtside Cellars in San Miguel and at Meridian in Paso Robles. She’s had the fortune to work with two of the Central Coast’s most prominent women winemakers, Signe Zoller and Lee Miyamura. “I was lucky to work with them,” she noted.

Like Brock she’s down to earth and appreciative of the opportunity she has to work with so many quality growers from whom they purchase grapes. “This is the best place I’ve worked because of the fruit sources I get here,” Wittmann smiled. “In 11 years I’ve come across quite a variety of grapes from different regions. It enhances my learning curve.” She explained she finds it exciting that wine is different each vintage, never stagnant, and that the experience keeps getting better. “I like working with Clay because he’s practical and knows how he wants to do things.”

Brock concluded, “I came from a small winery to one that’s ten times the size, but it’s grown so much smaller over the past year.” I chuckled remembering something Wittmann told me: “This is Clay’s biggest winery and my smallest. We’ve made a few changes and we share ideas. It’s great being able to work together in the winery and vineyards when we need to.”