The wine rush is on!: White knuckle your wine at P.W. Murphy Mining Co.

Warning: Readers with vertigo, fear of heights or an aversion to outdoor adventure may find this feature too intense.

When was the last time you signed a personal injury waiver? Were you about to bungee jump off a bridge? Hurl yourself out of an airplane?

How about wine taste?

If your answer to that last one was a meek “never,” you might be wine tasting all wrong. I certainly have. No more vanilla sipping for this writer! I say: Give me danger and kick the spit bucket.

This was my adrenaline-jacked thought as my body careened 1,800 feet across an impossibly green Santa Margarita landscape last week, a lingering kiss of Ancient Peaks Renegade blend still tingling on my tongue.

Soaring 125 feet above the winery’s sprawling pinot noir vineyard, I felt like a turkey buzzard riding the thermals—wind in my face, bugs in my teeth.

It was certainly the most kickass Monday I had experienced in a long time.

Unveiled in November 2013, the Pinot Express zipline is the longest, highest, and fastest of Margarita Adventures’ four lines, ejecting thrill seekers (and brave wine tasters alike) from the top of an oak studded mountain toward the earth at up to 45 miles per hour.

Maybe you’ve heard of it?

Now for something a tad lesser known: As of this month, the attraction is now home to a replica 1861 gold mining camp complete with water tower, mine shaft, and more rusty trimmings than you can shake a gold pan at.

The “new,” old-timey face of the Pinot Express is the artful handiwork of brother team Ron and John Daniels of Templeton-based Daniels Woodland. Aside from designing impressive tree houses, animatronics, shooting galleries, and other wooden spectacles, the guys also star in their own Animal Planet reality show, Redwood Kings. 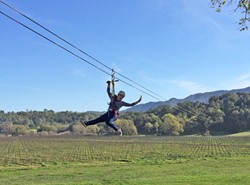 The Margarita Adventures partnership marks the brothers’ first major project built near their own stomping grounds (this week alone, projects are being shipped to Turkey and the United Kingdom).

As I toured the remodel recently, TV crews captured footage for an upcoming episode. Karl Wittstrom—who owns the 14,000-acre Margarita Ranch alongside Doug Filipponi and Rob Rossi—underscored the fact that the “T.V. stars” are SLO grown, employing about 40 people in North County.

“Both Ron and John are products of the Paso Robles school system, and were basically underground talents,” Whittstrom said. “The caliber of talent they have, and are able to employ, is amazing.”

Trees can make for darn exciting television, believe it or not. The team once encountered a 2,400 year-old sequoia that had been cut down 100 years prior and abandoned in the Sierra Nevada Mountains.

After slicing that sucker in half and polishing the wood, the brothers were shocked at what they saw.

“By counting the rings, we were able to see back to when Christ was born, when the Great Wall of China was built, and the Dark Ages,” Ron said. “The American history portion of the tree was only about four inches out toward the end. We’ve had the chance to take these slices around the country, and it’s dumbfounding to people how ancient these trees are. It’s a fascinating part of what we do.” 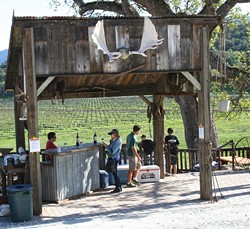 For Whittstrom, history and wine go together. The outdoorsmen’s vision of wine country tourism is rugged, full of natural beauty, and tinged with glimmers of a bygone era.

“We were searching for a way to get people out here to experience this part of California. Typically, when people think of California, they think of Los Angeles and Malibu, or San Francisco and the Golden Gate Bridge,” Wittstrom said. “We wanted to incorporate our California history into our ziplining experience. We call this the ‘1861 P.W. Murphy Mining Company’ because that’s the year that Patrick Murphy started Margarita Ranch.”

All you have to do is look up at the camp’s replica water tower to see that name, which, with any luck, could become a household name. A major player in bringing the Southern Pacific Railroad to Santa Margarita, Patrick Murphy acquired the ranch property more than 150 years ago.

He and his father, Martin Murphy, hailed from Sutter Creek, which just so happened to be at the epicenter of the California Gold Rush. The father-son team made a killing selling goods to the influx of miners, and later loaned $25,000 to Joaquin Estrada, the original grantee of the ranch. As the story goes, when Estrada defaulted on that loan, the Murphys acquired the ranch for $45,000.

Like so many “historical attractions,” the mining camp is a “reimagining” of past events, and Whittstrom hopes to meld the excitement of the Gold Rush period with Murphy’s personal experiences in Sutter Creek and Santa Margarita. However, there are some cool artifacts in there, if you look closely. Massive beams used for the water tower were sourced from a bridge torn down in Santa Margarita in the ’70s, and tin used throughout actually came off an ancient boar trap found on the ranch.

With the camp’s collage of animal skulls, old saddles, and cow hooks (there’s even an impressive pair of moose antlers hanging above the outdoor tasting bar), I felt the changes reflected a bit of “Frontier Land,” too.

As I zipped my way down to earth, a “mine shaft” opening—adorned with a crooked “danger” sign and a few abandoned-looking lanterns—loomed before me.

Adrenaline junkies should know that a sixth, 3,000-foot line—which will allow zipliners to race each other—is anticipated for mid-summer along with a 275-foot-long suspension sky bridge.

Although “serious wine tasters” are surely wondering where their sipping fits in, I have to say, wine is an important part of the experience. The view, the adrenaline, and the wine come together to make for a white-knuckle ride of this wild wine region, home to deer, mountain lions, and bears.

Still a little apprehensive about hopping into a gurgling ATV and four-wheeling it up the face of a mountain? Consider this: Recently, a 96-year-old friend of the ranch took the plunge, and just in time, too. Although no longer with us, his well-worn saddle is displayed at the camp.

“It was the last thing on his bucket list,” Weir said.

Hayley Thomas is still picking bugs from her teeth at hthomas@newtimesslo.com.