The woman who walked on water

When I call Kathy Kohner Zuckerman at her Malibu home, she snaps up the phone before it has a chance to ring.

“Hello?” she says, a note of seriousness in her voice catching me off guard. 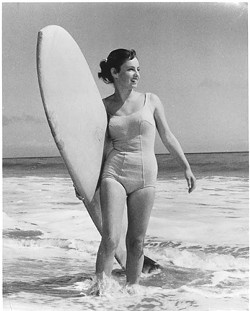 As I’ve never met her in person, my mental picture of the woman on the other end of the line is instead colored by the many film and television dramatizations of her life. And as I introduce myself to the 71-year-old Zuckerman, I fight off the image of a teenaged Sandra Dee or Sally Field waiting eagerly by the phone for a call from her crush.

Before Gidget, you see, there was a 15-year-old Jewish girl named Kathy Kohner, who, in the summer of 1956, learned to surf with the guys at Malibu’s Surfrider Beach. In this small group of diehard surfers, where everyone had a nickname, Kathy quickly earned hers, a reference to her gender and diminutive stature (girl + midget). Three years later, Gidget, a film inspired by her life, was a hit movie starring Sandra Dee in the title role.

What happened in between was a bizarre series of events only Hollywood could have generated. When young Kathy’s father, the screenwriter Frederick Kohner, discovered his daughter’s diary, he turned it into the best-selling novella Gidget: The Little Girl with Big Ideas, which was adapted shortly after into a film with Dee, Cliff Robertson, and James Darren. Directed by Paul Wendkos, Gidget was the start of a lucrative franchise. Sequels like Gidget Goes Hawaiian and Gidget Goes to Rome quickly followed. A Gidget TV series starring a then-unknown Sally Field launched the young actress’ career.

With every sequel or remake, of course, the Gidget story became further removed from Zuckerman’s actual experiences. There had been no love affairs, trips to Waikiki, or luaus on the beach. By the time the ’80s rolled around, Gidget had become a big-haired, made-for-TV glamazon, leaning seductively against a surfboard dressed in a metallic gown and dangling costume jewelry. (Meanwhile, the real Gidget had started a family and was working as a substitute teacher.) But the story’s core remained largely intact. At its heart, Gidget was Zuckerman’s story: a young girl making her way in a man’s world.

A few have pointed out that the surfer girl’s image was gradually whitewashed with every version of the story: In real life, Gidget was the daughter of a Czechoslovakian Jew, who emigrated to the United States in 1933 to escape Nazi persecution. In the novella, Gidget is a German-American named Franzie Hofer. In the films, she’s an all-American blonde named Frances Lawrence, all foreignness erased. But this doesn’t seem to bother Zuckerman.

Narrated by the husky-voiced Jorja Fox, Accidental Icon combines vintage photographs, film footage, and interviews with Field and other Gidget actors. A jaded-looking Wendkos, the first of many Gidget directors, expresses an often humorously cynical view of his own creation. A host of contemporary female surfing icons lends perspective to the mix as well, as do several permanently sunburned Malibu locals, many of whom appeared as fictionalized characters in the Gidget books and films: Bill Jensen, 15-year-old Kathy’s crush, on whom “Moondoggie” was modeled, and Terry “Tubesteak” Tracy, otherwise known as “The Kahuna.”

“It’s really become a historical document,” Zuckerman reflects in our phone interview, “because a lot of people have died.”

Indeed, Wendkos passed away in 2009, before the documentary had been finished. Just last August, the man known as Tubesteak died as well. But the cultural phenomenon they unwittingly helped create lives on.

For better or worse, Gidget signaled the mainstreaming of surf culture represented by the Beach Boys, surfing competitions, and the
late '50s introduction of polyurethane foam in surfboards, which replaced the clunky wooden things people had been dragging around
before.

But Gidget had struck another cultural chord. For many women, the story of the girl who broke into a male-dominated sport was a kind of proto-feminist fairytale. It was okay to be athletic and be a girl, Gidget seemed to say. You could break into the boys’ club, overcome the challenges, and be accepted as a peer, all without sacrificing your femininity. As Gidget TV star Field puts it in Accidental Icon, “You weren’t just fluff on the beach.”

After the film came out, Zuckerman, recalls, “I received hundreds of letters from young girls”—thanking her for setting such an inspiring example.

Watching Accidental Icon, one feels the filmmaker’s excitement to communicate the intricacies of this strange and little-known tale. Gillogly’s documentary is colorful and comprehensive, and a certain groovy energy propels the first two-thirds of the documentary. Once the Gidget story has been essentially told, however, the film loses some momentum: too much time is spent telling us, for example, how the name “Gidget” has been appropriated into popular culture, and reiterating that many female surfers have been inspired by the franchise. Style-wise, the film’s Powerpoint-y backgrounds and graphics may strike some as a bit cheeseball.

Fortunately, Accidental Icon’s humorous subjects, compelling story, and archival footage mostly make up for this. You come away having been educated, inspired, and perhaps a little mystified at how one silly summer flick kicked off a surfing revolution, and how one boy-crazy little girl became an unlikely feminist icon.

Arts Editor Anna Weltner hangs 10 on her keyboard. Contact her at aweltner@newtimesslo.com.