Finding the music within 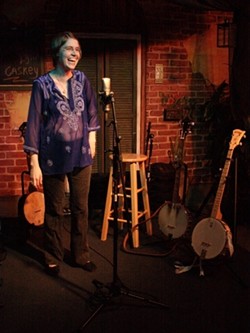 Donna Lynn Caskey was born in east Virginia into a family of talented musicians. Can you imagine the freaking pressure?!?

“The youngest of ten children in a family of music makers and music lovers, I mistakenly came to believe I would have to make do in the ‘music lover’ camp only,” she said. “My early experiences with piano lessons left me insecure; I didn’t have a knack for note reading so how could I be a ‘real’ musician?

“I loved to sing but reacted to childhood teasing by becoming terribly self-conscious about almost everything including my voice. I did my singing at least 40 voices deep in a choir where it was safe.

“I continued in the role of music aficionado and appreciator—devouring eclectic public radio broadcasts, checking out stacks of recordings from the library. I eventually realized that some of my favorite songs and voices were rough around the edges and then some, yet were tremendously affecting, nonetheless. I was also encouraged by stories of musicians who couldn’t read a note, but broke your heart with their gifts just the same.

“I began to think maybe I could make music after all. It didn’t have to be pretty and perfect. Simple, homemade music could be powerful music.”

Donna Lynn Caskey is the featured performer this Thursday, July 29 at Steve Key’s “Songwriters at Play!” showcase at The Porch in Santa Margarita (6:30 p.m.; all ages).

Downtown Brew kicks off the weekend this Thursday, July 29 (7 p.m.; all ages; $16 presale or $18 at the door), with Atlantic Records recording act Circa Survive, who are stopping by the club as part of their first headlining tour in support of Blue Sky Noise. The alt-rockers met at the Burning Man Festival 18 months ago, at which point they danced the good-times dance. “We love the nightlife. We like to boogie. Some of us like to eat jazz and listen to biscuits while others choose to jump rope in the nude. Our record has been born. It’s a girl. Buy it. Check it out chickadee and please bring cake to these shows ’cause it’s a party,” wrote the band, whose record debuted on the Billboard 200 chart at #11!

Rock, reggae, and dub fans, get ready for the return of Tomorrows Bad Seeds this Friday, July 30 (8 p.m.; all ages; $10), with opening act Klockwyze. With a high-energy mix of reggae, rock, punk, soul, and hip-hop, Tomorrows Bad Seeds create “a refreshing and vibrant sound that can captivate any crowd,” according to their bio.

Finally, the DTB closes out the week with punk act Against Me! on Wednesday, Aug. 4 (8 p.m.; all ages; $16 presale or $17 at the door). “The roots of Against Me!’s rousing punk-folk sound lie in Tom Gabel’s role as guitar-and-stool troubadour around his native Gainesville, Fla., beginning in 1997,” according to the band. “The then 17-year-old Gabel performed as a solo act wherever anyone would have him, drawing much influence from early acoustic protest music. The band around him would eventually solidify by 2001.”

Cache in the grass

It’s not too often fans get a chance to see the amazing Cache Valley Drifters and their tight musicianship, stellar three-part vocal harmonies, and eclectic bluegrass arrangements of both traditional songs as well as contemporary rock tunes done bluegrass style. Since Bill Griffin now lives in Oahu, the trio will perform a “one-date-only-micro-mini-tour” this Friday, July 30 (7:30 p.m.; all ages; $20; call 466-0837) at Greenacres Lavender Farm. The band has no other stateside dates scheduled for 2010!

Together for 35 years, they were the original back-up band for legendary folk artist Kate Wolf. Today the Drifters consists of original founding member Bill Griffin (mandolin, guitar and vocals, since 1972), bass player and singer Wally Barnick (since 1975), and guitarist and mandolin player Mike Mullins, a pal since the early ‘70s and band member since 1992.

Get your hip-hop on at Sustenance

This Sunday, Aug. 1, Sustenance Cooking Studio continues its foray into live music with an afternoon of hip-hop presented by The Stay Up Movement (2 p.m.; all ages; $2 presale at stayupmovement.com or by calling (805) 229-1786 or $5 at the door).

What is the Stay Up Movement? It provides various services and products to the community in which it resides. From T-shirts to community-oriented events, the Stay Up Movement prides itself on giving people what they want. It’s a grassroots thing—no big corporation or wealthy investors involved—just people coming together and supporting what they enjoy. Struggling artists who love what they do make all the designs on the T-shirts. The music performed at Stay Up Movement events is from up-and-coming, local, or underground musicians and artists.

This Sunday at Sustenance, artists from across the country and all over California are coming to San Luis Obispo to perform at this event. Hear SLO’s own Public Defendaz; the Bay Area’s Bape Squad; Salt Lake City acts Pat Maine, MC Pigpen, and Dusk One; and Los Angeles artist Verbs.

This Friday, July 30 the Steynberg Gallery hosts Barsuk Records artists Pearly Gate Music (9 p.m.; all ages; $8 presale or $10 at the door; call 547-0278), with opening act Nathaniel Rateliff. “Sometimes conjuring the feeling of a punk rock religious revival in an old-time prairie tent, sometimes stripped down to spare acoustic-guitar-and-lovely-croon, Zach Tillman’s music under the Pearly Gate Music moniker sounds as if it were written and performed by a bedraggled dust bowl poet influenced by whatever popular songs from the poor folk circuit were being sung after dinner in the parlors of his youth—and who somehow managed to supernaturally absorb the sound of Lubbock circa 1955, Laurel Canyon circa 1968, and Berlin circa 1980,” according to Tillman.

Do you like your rock’n’roll raw, real, and riotous? Get bonked by the Donk! This Friday, July 30, Stray Donkey—“The Central Coast’s most flagrantly vulgar and best looking band”—hits Sweet Springs Saloon with special guests Spiritbird, at 9 p.m. (21-and-older; $5). Two awesome undergroundish acts, one bedroom-community nightclub! What could go wrong?

The Amazing Stupifyers promise to amaze and stupefy this Friday, July 30 at The Clubhouse from 7 to 11 p.m., or if you happen to be in Santa Maria, on Sunday, Aug 1 at The Coachman Bar from 5 to 9 p.m. The electric blues band is fronted by Central Coast vocal and harmonica powerhouse Kirk “Boiling Hambone” Huitt, formerly of New Orleans, who plays original and traditional hard pumping Chicago style Blues. The group also features Seattle guitar legend Larry Curtis, New York rock-bottom bassist Joe C. Jiles, and Guadalupe-born drummer extraordinaire Franco Oliveira.

I used to love going to Mee Heng Low when it was a greasy Chinese restaurant. It felt like one of those hole-in-the-wall places in San Francisco’s China Town. It was cheap, tasty, and the couple who ran it were awesome. I gotta say, though, I like the joint even more now that Paul Kwong (Rhythm Café, Embassy Suites) took over and made it into a noodle house. Try the Twice Cooked Pork; I swear by it. I mention this because Paul recently got the upstairs open and has been doing jazz shows up there on Wednesdays. But this Saturday, July 31, he’ll present an 8 p.m. show with the Forbidden City Jazz band. “The cover will be $5 and we hope to do this on the last Saturday of every month,” said Paul. Awesome noodles, a nice selection of beer and wine, and now jazz? Sweet!

Dusk Till Dawn has been invited back to the Sweet Springs Saloon this Saturday, July 31 with opening band Dying Prayer from Sacramento. The 21-and-over, 9 p.m. show costs a scant $5.

Hillside Fire is playing at Frog and Peach this Saturday, July 31, bringing their rock, alternative, and Americana sounds to the club at 10:30 p.m.

The Village Summer Concert Series continues with Celtic dervishes Sligo Rags and bluegrass juggernauts Little Black Train this Sunday, Aug. 1 at 1 p.m. on the Rotary Bandstand in Heritage Square Park. Both acts are manned by raconteurs, so in addition to incredible music, expect history and humor during this free, family event.

Cuesta Ridge is the star of this week’s free Sundays on the Sand at the Avila Beach Golf Resort concert from 1 to 4 p.m. Dig your toes in the sand, enjoy a frosty beverage, and soak up the sun while listening to this amazing bluegrass and beyond band this Sunday, Aug. 1. 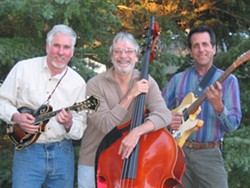 Coalesce Bookstore has brought Inner Faces back for another show this Sunday, Aug. 1 (2 p.m.; all ages; $10; call 772-2880 for tickets). The trio draws on influences from jazz, rock, classical, and bluegrass, and they’ve been performing their original brand of string music on the Central Coast since 1990. They’ve also appeared at the  Live Oak Music Festival, San Luis Obispo Mozart Festival, National Public Radio, and numerous concert, club, and coffeehouse venues.

Soulamente will fill Ramona Garden Park with some sizzling Latin sounds this Sunday, Aug. 1 from 3 to 6 p.m. during a free outdoor concert. Grab a chair, put on your dancing shoes, and join the fun.

Vancouver/Portland alt-rock act A Killing Dove plays Last Stage West on Sunday, Aug. 1 (6 p.m.; all ages; no cover). The show is a stop on their “The Look of the Eye Tour” that will trek through seven states in two weeks. Featuring Jake Brown on guitar and vocals, Seth Garello on guitar and effects, Kyle Garello on drums and cowbell (I want more cowbell!), and Fred Clark on bass, the group will be carrying their own merchandise and the Slamscene Warp Tour Download Cards, because the band is one of 40 artists featured on the cards.

Good old A-Town, it’s always up for something new. This Tuesday, Aug. 3, Atascadero is hosting The Music Walk, during which a whole bunch of downtown shops will be hosting musicians from 6:30 to 8 p.m. Walk by All About Hair, Bella Cose, English Rose Antiques, The Tea Trolley, Back on the Racks,  Frankie’s Deli, Bling it on Babe, Arlynes Flowers, Olive Tree Fine Arts Gallery, Envisions Gallery, Moblie’s, Time Since Remembered, Return Engagement, Haven Wine Bistro,  Musician’s Unlimited, the Fig, and Tuesday’s Jewels and hear some great tunes for free!

It’s Ladies Night this Tuesday, Aug 3 at the Clubhouse. “I will be featuring all female singer-songwriters and their music and we will be celebrating what seems to be a rise in their numbers as of late,” said Songwriter Showcase organizer Casey McDonald. The show is free, runs from 7 to 10 p.m., and includes Lou Ferreira, Jen Haase & Leslie Woodward, Natalie Haskins, Jackie Morris (from Carpenteria), Erin Teran, and Erin Inglish.