In 1953, a short, stocky motorcyclist raced a thundering blue British Vincent across the Bonneville Salt Flats and into the pages 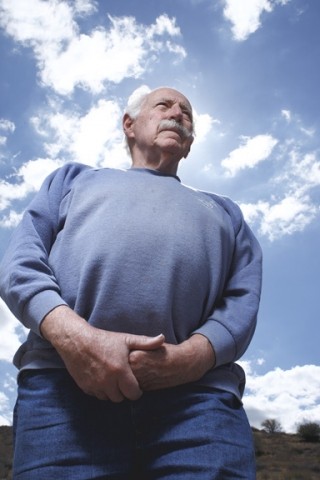 This month, that same legendary motorcyclist, Marty Dickerson who's now 80 years old did it again, roaring across the salt flats on a vintage Vincent and shattering his own record by riding more than 150 miles per hour.

"It didn't seem that fast at the time. There's nothing to judge your speed other than the wind pressure," said Dickerson, relaxing in his Creston hills home after unpacking the same trusty old suitcase and riding leathers he's used since he first made a name for himself in the 1950s.

His photos from the era depict his friendship with veteran New Zealand motorcyclist Burt Munro, portrayed by Anthony Hopkins in the film The World's Fastest Indian (Dickerson was played by Walter Goggins). With many tales of his own to tell, Dickerson could easily be the subject of his own movie.

"He's a legend. He's way up on the cool scale. Steve McQueen would think Marty Dickerson is cool as hell, that's how cool he is," said Larry Kahn, a riding buddy who first read about Dickerson's feats in motorcycle magazines as a teenager in New Jersey.

Even as an octogenarian, Dickerson finds motorcycle riding as compelling as ever.

"Motorcycling keeps you young and virile," he said with a laugh and a quick double eyebrow-raise in the direction of his visiting Australian lady friend Edith Irving, whose late husband designed the Vincent engine.

Dickerson grew up on a family ranch that is now Los Angeles International Airport and bought his first motorcycle in high school a $65 non-running 1929 Harley eventually trading his shiny Triumph Tiger for one of the first Vincents in the United States in 1948. With its massive engine and reputation for power, "the blue bike," as he calls it a 1948 Series B Rapide V-Twin was irresistible in spite of its $1,129 price tag.

To help pay for his new motorcycle, Dickerson was hired by the Vincent dealer to demonstrate the bike around California and the Southwest to generate sales.

"Every town I was in, I had to race the fastest thing in town," he recalled, launching into stories of late-night races on dark desert roads, every one of which he and his Vincent won. Once, six Texas state troopers on Indian motorcycles asked to race him.

"It was like they were tied to a post. There was no contest. I thought I'd sold them all bikes!" he said.

Dickerson got his first taste of the Bonneville Salt Flats when he accompanied his friend Rollie Free, who's depicted in a famous photo lying on his speeding motorcycle, legs kicked out behind him, wearing nothing but a thong-style bathing suit to reduce air drag.

His friendship with New Zealander Burt Munro began at Bonneville in 1956 and endured through the years. His photos of the era spilling out of boxes on his living room floor as he transfers them to his new computer were used to create the sets for The World's Fastest Indian. They show Munro and his red streamliner Indian under the azure Utah sky, as he's presented with a bag of money his friends collected for him.

"He was a character, old Burt," said Dickerson as he showed a series of photos of Munro hugging the women in the group.

Munro was full of stories, and Dickerson would sometimes set up a tape recorder to catch the determined motorcyclist's distinctive accent. Anthony Hopkins used those tapes to develop his portrayal of Munro for the film.

Dickerson's photos of himself show his characteristic moustache, pencil-thin in earlier shots and a bushy handlebar in later ones.

According to Dickerson's biography in the Motorcycle Hall of Fame, he was also a top-notch road racer in Southern California, winning speed contests on various bikes in the '50s. He opened a Vincent dealership in Hawthorne, and later taught motorcycle mechanics at a vocational school for 17 years.

Throughout the years, he's had "only one or two" crashes, explaining, "To keep your machine under control you have to have respect for it. If you think you're the master, it'll show you you're not. You develop a rhythm with your bike, a feel for how it reacts."

In 1996, at the age of 70, he brought his beloved old Vincent out of mothballs and set a vintage speed record of 130 mph.

"Like old people, the bike just got tired, and that was as fast as it would go," he recalled.

In 2000, after owning the blue Vincent through three marriages and more than 50 years, Dickerson sold it to a Texas collector. It's now in a private museum, along with Rollie Free's famous bathing suit.

It was a friend's vintage black Vincent that Dickerson rode into the record books at Bonneville this month, with a speed of 151 mph wearing his old leather riding suit, not a bathing suit.

"I raised my record by 20 miles," he said. Then, with a smile under his moustache and a twinkle in his clear blue eyes, he added: "Next year, maybe I'll raise it another 20."