The 'wrong side of the bars;' Narcotics sting leads to the arrest of 21 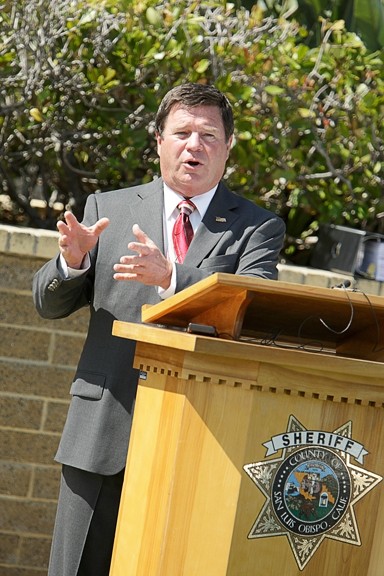 Twenty-one people, including a guard and other prison employees, have been arrested in connection with an alleged drug smuggling ring centered at California Men’s Colony.

Gunshots from a practice range sounded in the background as several law-enforcement agents from around the county lined up on the lawn in front of the Sheriff’s Department headquarters to answer press questions about what they called “Operation Broken Badge,” a five-month investigation focused on the state prison.

They wouldn’t discuss exactly how drugs were moved into the prison or what quantity was involved. One prisoner was arrested in connection with the drug smuggling. In all, 19 of the 21 people accused were residents of Templeton, Paso Robles, or Atascadero. They were arrested on June 15 and 16 when a series of 11 warrants were served locally and in Los Angeles. Police are still seeking a Los Angeles man in connection with the alleged ring.

“Operation Broken Badge allowed us to assist the California Department of Corrections in removing persons from their organizations that were on the wrong side of the bars,” Sheriff Patrick Hedges said. “It is always difficult when law-enforcement agencies have to take direct action to arrest their own employees for alleged misconduct, however we must preserve the public trust.”

The investigation started internally with prison officials looking at possible smuggling by CMC employees. The Sheriff’s Department, Immigration and Customs Enforcement agents, and the local narcotics task force were brought in to organize parallel investigations. Hedges said the operation involved methamphetamine, heroin, and marijuana transported from Mexico. It was unclear how long the alleged ring operated before law enforcement began investigating.