"The war tried to kill us in spring.”

So begins Kevin Powers’ harrowing novel, The Yellow Birds. Published in 2012, the story chronicles the experiences of two young soldiers, 21-year-old John Bartle and 18-year-old Daniel “Murph” Murphy, as they navigate through boot camp and their eventual deployment to Iraq during the height of the most recent conflict. There, the young men find themselves wildly unprepared for the violence and anguish that awaits them.

The novel draws its title from a traditional U.S. Army marching cadence: “A yellow bird with a yellow bill/ Was sittin’ on my windowsill/ I lured him in with a piece of bread/ And then I smashed his fuckin’ head.” 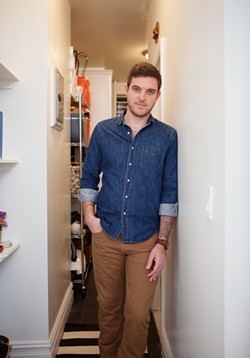 Balancing the intense nature of the plot with lush prose, Powers conveys the bleak and bitter realities of the war with gripping precision. The novel is told from Bartle’s point of view, with short chapters told in a nonlinear format. The crux of the novel is centered on Bartle’s ill-conceived promise to Murph’s mother to bring him home safe and the pressure he feels in his attempt to fulfill it.

This is Powers’ debut novel. In 2012, it was named one of The New York Time’s 100 Most Notable Books of 2012, awarded The Guardian’s First Book Award the same year, and a finalist for the National Book Award. In 2013, it won the prestigious Hemingway Foundation/PEN Award.

Powers, a native of Richmond, Va., is himself a veteran. He enlisted in the U.S. Army at the age of 17, serving as a machine gunner in Mosul and Tal Afar, Iraq, from 2004 to 2005. After receiving an honorable discharge, he studied English at the Virginia Commonwealth University and went on to receive an M.F.A. in poetry from the University of Texas. Powers said he turned to writing partly in search of a cathartic release during his transition back to civilian life.

“That certainly was an aspect,” Powers told New Times over the phone. “It’s probably in a way for everything that I write about no matter the subject. But when it comes down to it, I’m using writing to answer questions about the experiences I’ve had in my life or about the world and trying to find a way to articulate questions. I think it is helpful though, I think for a lot of veterans, myself included. When I got home, there was really no shape or form of what was going on inside my head; I didn’t know what kind of name to give it, so I was just trying to articulate what I was feeling.” 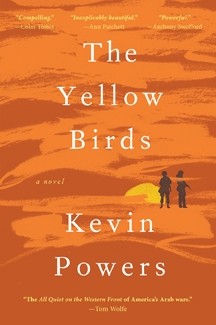 While the story is fictional, Powers embedded several autobiographical elements into Bartle’s journey. The result is an unflinchingly honest and heart-wrenching account of a young man thrust from adolescence into battle, the whole time questioning his purpose in life.

“I always draw in part from my experiences,” Powers said. “The interior emotional life that Bartle has is most closely based in reality, as well as the different ways that people reacted: Some people turned inward, others externalized everything, and in that respect, it sort of does reflect my experiences. I like to think that there’s some Venn diagram-type of overlap between real experiences and a surreal nature.”

The Yellow Birds not only confronts the brutality of war, it also brings up the issue of America’s slightly hypocritical treatment of soldiers overseas and those returning home. When Bartle is en route home, he experiences extreme discomfort and guilt from random strangers who express gratitude and treat him with near hero-worship for doing something that he now considers immoral.

“It’s definitely both an individual and a cultural problem,” Powers said. “There’s a problem in the culture of the military with being willing to admit that you have a problem and that you need help, and there’s a problem with the way it’s received and with all of the ideas people have about what a soldier represents. There’s that tension of being one person with unique perspectives, experiences, thoughts, and opinions, and having that butt up against everything else.”

Brimming with emotion and complexity, the novel is a reminder that the war is not yet over, and that these kinds of struggles and issues should not be ignored.

“The real question I was trying to answer was do any of us really get to be more than just a kind of sum of things that we’ve done,” Powers said. “Are we inherently more, or is there something more behind the compilation of our experiences and actions? That’s something that he [Bartle] really struggles with in the beginning. But I hope that by the end of the book, the reader will see that possibility exists for him to be something more, or at least something else.”

Intern Adriana Catanzarite can be reached via Arts Editor Jessica Peña at jpena@newtimesslo.com.