Theater community reacts to the death of Rae Stone

Friends and admirers of Rae Stone are planning a memorial service at Cambria’s Pewter Plough Playhouse. Stone—a local actor, acting teacher, and supporter of theater on the Central Coast—died of cancer Friday, Aug. 24 in Fort Lauderdale, Fla. She was in her late 50s. However, many members of the local theater community are only recently learning of Stone’s death. 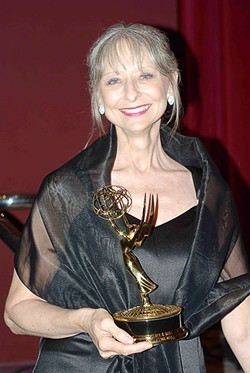 Her health failing, Stone had moved to Florida last June to spend time with her mother, Natalie Decker, now the only surviving member of her immediate family.

“Rae went to spend time with her mom,” recalled Gloria Lautt, a close friend of Stone’s. “I was kind of taken aback that I hadn’t heard from her since she left.”

After attempting to contact her friend, Lautt was eventually informed of her passing earlier this month. She was among the first on the Central Coast to hear, but the belated news spread quickly throughout the theater community.

An Emmy-winning actor, Stone moved to the Central Coast from L.A. in the late ’90s and quickly became involved in many aspects of the local theatrical community. She’s fondly remembered for her work at the San Luis Obispo Little Theatre, where she played Ava in Sarah Ruhl’s The Clean House and Fonsia in The Gin Game; and at Cambria’s Pewter Plough Playhouse, where she played M’Lynn in Steel Magnolias and directed Terrance McNally’s Lips Together, Teeth Apart.

Stone also founded Actors Warehouse, a resource for actors that began as an e-newsletter and evolved into a teaching center for young actors in Atascadero. The Studio at Actors Warehouse, which Stone opened in 2008, focused on helping children deal with emotional challenges through drama.

“Rae Stone loved live theatre and was devoted to its vitality on the Central Coast,” Jim Buckley, Pewter Plough Playhouse founder and artistic director, wrote in an e-mail to New Times. In addition to her being a great performer, Buckley wrote, “the benefits of Actors Warehouse, which Rae made possible, are sorely missed. ... We all miss her friendship and sense of commitment to our theatrical community.”

As of this writing, the date of the memorial is still forthcoming. Those interested in attending are encouraged to contact Lautt at rj77240@gmail.com.