Theater of the battlefield

Playwright Charles Mee has an unusual policy on the use of his work. People interested in staging his original plays have to pay to do so, but people interested in altering, adapting, and borrowing from his work may take from it as they wish—and at no cost. On his website, Mee strongly encourages the latter, explaining that “there is no such thing as an original play.” By this he refers not only to the way Shakespeare and the ancient Greeks stole their plots from existing stories, but to the simple fact that humans can’t help but take their narratives from the world around them, making true originality impossible:

“Sometimes playwrights steal stories and conversations and dreams and intimate revelations from their friends and lovers and call this original,” he writes. “And sometimes some of us write about our own innermost lives, believing that, then, we have written something truly original and unique. But, of course, the culture writes us first, and then we write our stories.” 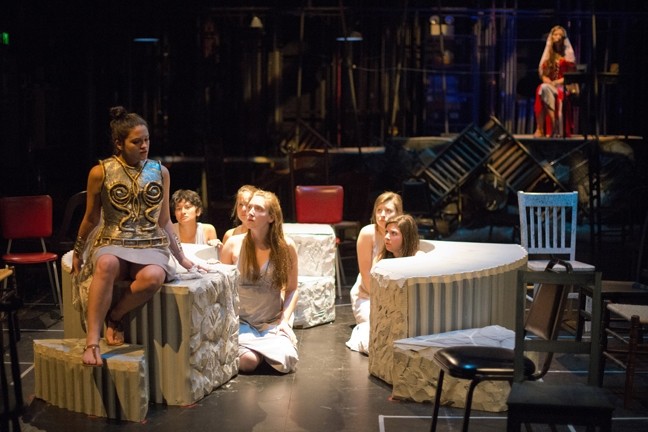 This sentiment seems particularly apt when describing Mee’s Trojan Women: A Love Story, a play about the cyclical nature of war, and the rhetorical nature of theater. Mee took Euripedes’ tragedy The Trojan Women and set it in the modern world. Hecuba delivers an opening monologue in torn silk Yves Saint Laurent; a Greek chorus sings Billie Holiday. But while his dialogue may have included lines ripped from soap operas, Mee left the plot’s central question intact: In the aftermath of the Trojan war, what will become of the women of Troy?

Recently, Cal Poly Theatre and Dance Professor Josh Machamer took the story a step further. His Trojan Women 2.0, an even-more-remixed version of the Greek tragedy, opening at the Spanos Theatre on Thursday, May 9, pulls from sources as disparate as The New York Times, Amnesty International, and The Bachelor. And though moving away from the original source material, Machamer’s version seems to further distill Euripedes’ themes. Inside the plot’s central question, Machamer shows, there hides another: When a war is over, has anyone really won?

Trojan Women 2.0 opens with a monologue by the herald Talthybius, played by Chris Riordan.

“When thou shalt besiege a city for a long time, in making war against it to take it,” Talthybius begins, “thou shalt not destroy the trees thereof by forcing an axe against them: for thou mayest eat of them … .”

Talthybius informs the dethroned Trojan queen Hecuba, played by Brigitte Losey, what is to become of her daughters, and to all the women of Troy—its fruit-bearing trees, in his unpleasant metaphor. They are to be divided among the Greeks as wives, concubines, and slaves. Throughout this opening, and indeed much of the performance, a chorus of women serves to not only narrate the play, often speaking in unison, but also to add a volley of individual interjections, ranging in tone from solemn and reflective to manic and disturbing.

Here seating and set design should be illuminated. Like the Machamer productions of the past few years (last year’s wordless play The Hour We Knew Nothing of Each Other was performed outdoors; 2011’s Smash brought the audience onstage after the first scene), both are highly unusual. Trojan Women 2.0 is performed backstage at the Spanos Theatre, with the audience seated in the center of the action and great heaps of urban junk piled artfully around the periphery of the space. It is on platforms atop these junk piles, largely comprised of rusted metal parts from who knows where, that many of the women remain throughout the play, reciting their lines across a landscape of urban destruction.

Placed throughout the area are mannequins holding televisions, in which one observes the women who have been taken prisoner, held in an offstage holding area of sorts. In the center are the ruins of a Greek column.

At a recent rehearsal, the initial effect of Trojan Women 2.0 seemed to be one of disorientation. We are not safe in our seats but directly in the center of the action. The characters in our play (for we do feel as though we are part of the story) are often unnamed and speak in a language that is alternatively lyrical and disarmingly vernacular. The world is both ancient and contemporary.

But as the play continues, we accept this jarring dystopia and become drawn in by the stories the players have to tell.

I am often wary of college performances of heavy material, as many actors in their late teens and early 20s tend to lack the life experience required to portray a bereaved mother or a hardened war veteran. But here, several actors may surprise you. Karlee Benner delivers a fearlessly raw performance as Andromache, a daughter of Hecuba. When her young son is killed by the Greeks, who fear that the boy might grow up to take revenge, Andromache’s pain cuts jaggedly through the space.

Torin Lusebrink, so gleefully ridiculous as G.I. Joe and a transvestite flight attendant in last fall’s God’s Ear, appears as the disturbingly confident Menelaus, the man who, following the abduction of his wife Helen (Kate Matten), started the Trojan War. Menelaus—and, of course, Helen—is spoken of with great malice throughout the play, though he largely remains absent. Thus, when Menelaus appears late in the play to deliver a deeply patronizing monologue about “leadership,” Lusebrink’s inspired delivery blending a motivational speaker and a terrorist, we are incredulous at his nerve. Here is war at its most theatrical.

The monologue, director Machamer divulged, was actually pulled from a speech given by Tom Ridge, who was Secretary of Homeland Security during the Bush Administration.

Might the play have seemed timelier during that administration? Perhaps, but the sad truth is that war is always a current event. You can criticize the play’s main themes, Machamer pointed out, as boiling down to the simplistic “war is bad” motif. Don’t we all know that already? But Machamer has a simple answer for that.

“Obviously we don’t,” he said, “because we keep doing it.”