There and back again

The making of a hobbit's tale 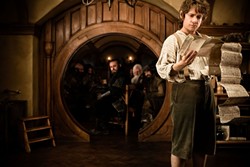 On Silver necklaces they strung

The flowering stars, on crowns
they hung

The dragon-fire, in twisted wire

They meshed the light of moon and sun

It can be said that the hobbit Bilbo Baggins, created by author J.R.R. Tolkien and recently given life on the big screen thanks to director Peter Jackson, was a proud and well-practiced Luddite. Tucked away in a hobbit hole with just enough food and drink, he was content to live out his days (which for hobbits is many), never leaving the comforts or borders of the Shire he called home.

Adventure was a foreign and frightening concept that required some cajoling and coercing on the part of his friends.

But leave the Shire he did, to battle a fearsome and greedy dragon, and while there were complaints (mostly food related) and longings for simple comforts, Bilbo Baggins found that in leaving home for the unfamiliar he was capable of just about any adventure imaginable.

Fear of a misstep is one that many film critics are trying to pacify with the opening of The Hobbit: An Unexpected Journey, which makes use of a groundbreaking, new picture technology.

Director Peter Jackson (who also helmed the Lord of The Rings trilogy) created the movie using high frame rate cameras—known as RED cameras—that rendered the movie in 48 frames per second. That’s exactly twice the traditional speed of frames most moviegoers are accustomed to seeing.

But the road to what many are saying is a standard-setter for filmmakers everywhere has been host to a long and, at times, plodding journey.

“Do you remember that, Jack?” Felicia asked from behind her desk at the lab’s headquarters in San Luis Obispo. “They would just go on and on for hours about how to cut costs by making the film canisters smaller.”

A lot has changed since the couple moved their sound, lighting, and color equipment lab from Tarzana to San Luis Obispo in 1996.

For one, film has become a thing of the past. You need look no further than the coffee table in Felicia’s office built from a recycled film reel to know that the industry has been overhauled.

Movie theaters nationwide are being forced to do away with film projectors in favor of digital playback, sometimes to the tune of $80,000 in equipment retrofits.

San Luis Obispo’s Fremont was one such theater to exchange its film reel equipment for the 21st century goods several years back. It was an expensive, but necessary heart transplant.

“It’s such a great, old theater … it reminds me of the Fox in Atlanta,” Felicia said. “They just don’t make them like that anymore.”

Two years ago, the Cashins and the Fremont embarked on a journey to prepare the theater for the heavy burden of 48fps playback.

“It just takes so much to process information that fast, and it was almost like, as soon as the Fremont put in that new projector, it needed to be retrofitted to do this,” Jack explained.

24fps has been the gold standard since 1926 when the film industry started adding sound to pictures.

Film stock is incredibly expensive for production studios, so the fewer pictures you put on the reel, the less film you need, and the cheaper your film will be to make.

Still, in order to avoid gaps in the dialogue, moviemakers found that there was a magic frame number that worked for sound and picture, and that was 24, which stuck until the 1970s when directors started to experiment with higher frame rates and 70mm film.

This era inspired Jackson and other directors like James Cameron (who plans on producing future Avatar movies in 60fps if The Hobbit is a success) to go with the high-frame-rate cameras.

“I mean, this [high frame rates] idea has been around,” Jack explained. “The technology just hasn’t really been there until recently to support it in this kind of way.”

Higher frame rates per second mimic what the eye does naturally. When individual pictures start moving in sequence faster than approximately 55 frames per second, the eye stops seeing them as distinct, separate images.

“It’s an incredibly clear picture,” Jack said. “The detail in everything is remarkable.”

Proponents of the process, like Jackson himself, argue that this is the way the world is shifting, but dissenters say the picture takes too much time to get used to and that it makes the image appear kitschy or much like a daytime soap opera.

“It’s different than what people are used to,” Jack explained, “but that’s what this is about. We are seeing how people are going to react. The technology is only going to get better with time.”

His sentiments are echoed in tech blogs and magazines around the globe that are saying this isn’t only going to clarify and improve the 2-D and 3-D viewing experience, but it will most likely one day be coupled with high definition technology for an even more hyper-realistic viewing experience.

The Fremont will play the movie through the New Year and be one of only 450 theaters in the nation to show the picture at a high-frame rate.

For their part, the Cashins return to business as usual after such a high-expectations journey.

“We finished up over there [at the Fremont] around 3 a.m. the other morning,” Jack explained as he mounted the stairs to the company’s tech lab. “It’s been quite a ride.”

He ended his walk where a 3-D, HFR version of The Hobbit trailer eventually began to play in a dark screening room. He leaned back into an office chair and let out a deep and relaxed sigh as two of the main characters appeared on the screen.

“Can you promise I will come back?” asked an incredibly crisp, cinematic version of Bilbo Baggins.

“No,” responded the wizard Gandalf. “And if you do, you will not be the same.”

Calendar Editor Maeva Considine doesn’t have hairy feet, but kinda likes them in 48 frames per second. Send her your thoughts and comments to mconsidine@newtimesslo.com.