There are a zillion concerts this week! A zillion!

Even though school’s started, we’re still in peak concert season, and this week is packed with a ton of great shows. Up at Vina Robles you’ve got a choice of three iconic female performers as well as two hit-making funk and R&B acts. Good Medicine Presents has a great Red Dirt act at the SLO Guild Hall as well as a great party band, a hip-hop show, and an amazing singer-songwriter at the Fremont, and another free beach concert in Cayucos with two reggae acts! Steynberg has an awesome show of singer-songwriters in their side projects, the Blues Society has one of my favorite blues acts at the Vets Hall, SLO Brew has two compelling shows, Pozo Saloon has a kick-ass old school punk show, and there’s just a whole bunch more, so let’s dig in. 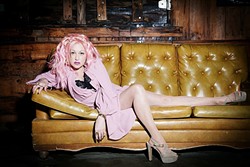 Vina (all shows are all ages with tickets at vinaroblesamphitheatre.com) starts its week on Friday, Sept. 23, with Bonnie Raitt in her Dig In Deep tour with opener Richard Thompson (doors at 6 and show at 7:30 p.m.; $55 to $99.50). Raitt has already sold out more than half her tour dates, playing songs from her new album like the breakout single “Gypsy in Me” as well as familiar hits such as “Something to Talk About,” “Angel from Montgomery,” and “Nick of Time.” Great performer, great voice, and great guitar work with a kick-ass band behind her. 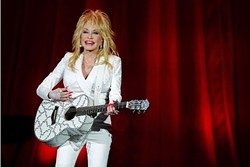 On Tuesday, Sept. 27, Cyndi Lauper with special guest Charlie Musselwhite plays Vina (doors at 6:30 and show at 8 p.m.; $47.50 to $67.50). Lauper’s had so many amazing hit songs from “Girls Just Want to Have Fun” to “Time After Time” to “True Colors.” Who can sit still when she plays “She Bop?” She’s still making great music! Check out Detour, released in May of this year, which finds the musical chameleon making a foray into country music! Opening act Charlie Musselwhite is one of the greatest blues harmonica players in the world. Should be a great show.

On Wednesday, Sept. 28, the most decorated woman in country music—Dolly Parton—plays Vina (doors at 6 and show at 7:30 p.m.; $75 to $199). Geez, where to begin? She’s had 25 No. 1 hit songs, 41 top 10 albums, 46 Grammy nominations and seven Grammy Awards, and she’s in the County Music Hall of Fame and has starred in films such as 9 to 5, The Best Little Whorehouse in Texas, Rhinestone, and Steel Magnolias. She’s 70 and still looks dreamy!

Good Medicine begins their week on Thursday, Sept. 22, with Red Dirt singer-songwriter Wade Bowen at the SLO Guild Hall (7 p.m.; 21-and-older; $20 presale at ticketfly.com or $25 at the door). He launched his career 14 years ago in the famed Stubb’s Barbecue in Lubbock, Texas, and has since released five albums and amassed a fervent fan base, not to mention introduced the rest of America to the new breed of Red Dirt artists who can draw their lineage back to Waylon and Willie. The Small Kicks open. 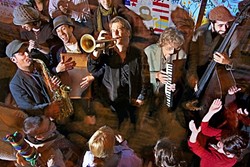 On Friday, Sept. 23, local country, bluegrass, and beyond act Cuesta Ridge plays Tooth & Nail Winery (5:30 p.m.; free). These guys exhibit serious musicianship, but they’re genre hoppers with a sense of humor who make a party every time they play.

Also on Friday, Sept. 23, The California Honeydrops return to the Fremont Theater (7 p.m.; all ages; $22.50 presale at ticketfly.com or $25 at the door). Fronted by Polish-born vocalist and multi-instrumentalist Lech Wierzynski, the band operates within classic American genres like R&B, funk, Southern soul, Delta blues, and New Orleans second-line. These guys blew the crowd away at the Live Oak Music Festival last June and put on an amazing live show. Steep Ravine opens.

Back on Sept. 10, the first of four Cayucos Beach concerts were held with Matt Costa headlining. What a great time to hang at the beach, listen to live music, and enjoy the wares of vendors lined up along the street. The series continues this Saturday, Sept. 24, with One Drop Redemption (a tribute to Bob Marley & The Wailers) with local reggae and ska act The Kicks opening (noon to 5 p.m.; all ages; free). Led by Jamaican-born singer-songwriter Jahmark Tafari, One Drop delivers a Bob Marley tribute straight out of 1978. Formed in 2005, they’ve become the premiere Bob Marley tribute act.

On Monday, Sept. 26, Tech N9ne’s the Calm Before the Storm 2016 tour comes to the Fremont Theater (7 p.m.; all ages; $33 presale at ticketfly.com or $35 at the door) with Krizz Kaliko, JL, and Starrz. Fans of indie rap won’t want to miss this night of raw, authentic underground hip-hop.

On Wednesday, Sept. 28, singer-songwriter Conor Oberst plays the Fremont Theater (7 p.m.; all ages; $27 presale at ticketfly.com or $30 at the door), with opening acts MiWi La Lupa and Anna McClellan. Oberst, who hails from Omaha, Neb., started writing and recording in 1993 in various bands and collaborations like Commander Venus, Monsters of Folk, Conor Oberst and the Mystic Valley Band, Park Ave., Desaparecidos, and most notably Bright Eyes. Between him, La Lupa, and McClellan, there’s going to be a lot of talent on display.

Fans of the female super group Blame Sally will be excited to learn that members Monica Pasqual and Renée Harcourt will roll through town on their West Coast tour for their two side projects—Monica Pasqual & the Handsome Brunettes and Dear John Love Renee—with another band member, Pam Delgado, in tow. They’re doing a CD release party on Sunday, Sept. 25 (4 p.m.; all ages; $20 tickets at monica-renee.eventbrite.com).

Pasqual’s band has delivered a truly stirring record with spartan and ethereal instrumentation and beautiful harmony vocals between her and Delgado. Deeply personal and effectively emotive, Is Fortune A Wheel is a gorgeous meditation on love’s complications.

Harcourt’s side project features her and NYC transplant John McConnell delivering tight vocal harmonies and rootsy melodies in the folk, Americana, and pop genres. The Everly Brothers and Simon and Garfunkel came to mind as I listened to their self-titled debut album. Delgado will also sit in.

If you like great songwriting, harmony singing, and fine musicianship—and who doesn’t?—come on down!

Frontwoman Roach has the power and charisma of Tina Turner, and her husband, guitarist Byl Carruthers, executes crisp blues guitar licks under Roach’s incendiary and often explosive vocals. They’re absolutely mesmerizing on tracks like “Born Under a Bad Sign” or “Killin’ Floor.” The band also includes Bobby Pickett on bass, Harry Cohen on keyboards, and Adam Gust on drums. Deep Blue will open. 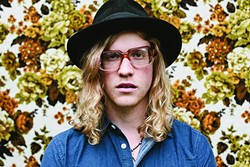 Next Thursday, Sept. 29, blue-eyed soul singer Allen Stone performs with opening act Jessica Childress (8:30 p.m.; 18-and-older; $25 GA or $50 VIP). Stone’s touring in support of his third album, Radius, and Childress was a contestant on The Voice and sounds a lot like Diana Ross! 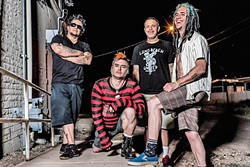 It’s time for the third annual Picnic in Pozo, which means a whole slew of amazing punk acts including the Descendents, NOFX, Youth Brigade, the Swingin’ Utters, Manic Hispanic, and the Bad Samaritans on Saturday, Sept. 24 (gates at noon; all ages; $32.50 at pozosaloon.com and Boo Boo Records; kids 10 and under are free).

The Descendents bring their witty take on everything from parents to fast food. NOFX are a personal favorite: socially conscious, irreverent, and musically explosive. Youth Brigade are masters of melodic hardcore punk. This is going to be awesome!

There’s so much more going on this week that there’s no way I can list it all, but here goes:

The Harmony People play a Songwriters at Play showcase this Thursday, Sept. 22 (6:30 p.m.; all ages; free), in the Shell Cafe. Anjalisa and Gary met when Gary was performing in California, and Anjalisa began harmonizing from the audience. They knew it was right!

The Travis Larson Band is playing a CD release party at Frog and Peach Pub on Thursday, Sept. 22 (8:30 p.m. 21-and-older; free), in support of their new album Anicca. If you like serious guitar shredding, Larson’s your prog-rock man.

Cal Poly Arts and Otter Productions are bringing the amazing Lindsey Stirling to the SLO-PAC on Friday, Sept. 23 (8 p.m.; all ages; $30 to $75 at 756-4849 or online at pacslo.org). The electronic music impresario, classically trained violinist, dancer, and artist puts on a crazy-good show!

Hawaiian music artists Waipuna will play the Central Coast for the first time this Saturday, Sept. 24, brought to you by Hoapili Productions at St. Benedict’s Episcopal in Los Osos (7 p.m.; all ages; $30 tickets at santamariahula.org).

Unfinished Business will bring its Beatles Tribute Show to the Rancho Nipomo Gold Rush Cantina on Saturday, Sept. 24 (7 p.m.; all ages; $10). Hear all the hits and eat some great barbecue!

LA’s Hunter & The Dirty Jacks return to the Frog and Peach Saturday, Sept. 24 (10 p.m.; 21-and-older; free), to deliver blues, rock, psychedelic jamming, as well as some folk, country, and Americana.

The Cuesta Wind Ensemble plays on Wednesday, Sept. 28 (7:30 p.m.; all ages; 546-3198 or online at cpactickets.cuesta.edu), performing compositions from Grainger, Copland, Ticheli, and more!