There will be blood

Dalidio Ranch project is essentially guaranteed, but legal battles are far from over and hundreds of thousands of dollars are at stake 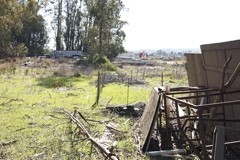 Perceptions can be funny, especially when money is involved—and extra especially when the court system is involved. If you ask Ernie Dalidio how much he thinks he’ll be getting back from the people who tried to block his SLO development, he has a pretty firm number in mind. But ask the people who might have to pay for all the attorneys and other legal fees accrued over nearly four years, and their estimate is about 10 times less.

When New Times asked Russ Brown—vice president of Citizens for Planning Responsibly, which sued Dalidio over his Measure J initiative—he believes, at worst, his group and others associated with the lawsuit might have to pay Dalidio and his attorneys about $1,000 to $4,000. But Dalidio’s attorney James McKiernan said it would probably be closer to $300,000. Then he corrected himself and said they’d probably be seeking closer to $400,000, plus or minus a few thousand. As for Dalidio, he said at least $300,000, but probably more.

The California Supreme Court refused to hear an appeal put forward by Citizens for Planning Responsibly and the Environmental Center of San Luis Obispo that sought to overturn the 2006 election results that opened the door for Dalidio to build a commercial development on unincorporated land bordering the city of SLO. Any actual development has been tied up in court until now. The case could be appealed to the Supreme Court of the United States, but Brown said it probably won’t get to that point.

And that’s where the issue stands, even as the Measure J scuffle appears to have reached a tentative end. But there are still plenty of battles to be fought.

Asked about the possibility of paying for Dalidio’s court costs, Brown sounded uncertain how the “grassroots” organizations that fought Measure J in court would raise more funds.

“Yeah, we don’t have any big coffer for resources,” Brown said. “The money that we have been utilizing has been raised from citizens—normal working people who care about the community and are willing to put some funds into responsible planning efforts. As I understand it, the court will order that kind of reimbursement in the next few weeks.”

That’s just one of the battles, and perhaps the most straightforward one. On another front, Dalidio is going after the San Luis Obispo Downtown Association and the largest contributor to the anti-Measure J campaign in 2006: Responsible County Development, LLC. Two months after the LLC became official in 2006, it began funding the Measure J campaign. It’s still unknown who was involved with the LLC, but Dalidio and his supporters believe the Downtown Association and prominent SLO developers from the Copeland family were at the core of the effort to block the project.

The Fair Political Practices Commission should soon be closing investigations of both the Downtown Association and the LLC, now two years after Dalidio filed complaints against the groups in mid-2007. The LLC funneled $110,000 to the No on Measure J campaign just months after forming in May 2006. According to Dalidio’s complaints, the LLC was created specifically to fight his project without having to disclose any names.

“Pretty much I have no comment,” Cash said. “We never did take a position on Measure J in any form. We never did participate in Measure J.”

McKiernan said, “In an outrageous set of violations, the LLC that was involved in a number of the funding activities is clearly something that the public is interested in, as well as Mr. Dalidio.”

Dalidio didn’t have much to say about his project or the pending legal battles other than hinting that more litigation is on the horizon. As for his project, he said he isn’t even thinking about getting it rolling again until after the holidays.

Though Measure J ultimately passed with a healthy 64 percent of the vote countywide, Dalidio, in his complaint to the FPPC, wants the names of the LLC membership made public.

“Mr. Dalidio’s intentions are to make it precedent setting relative to finding out who is involved in the faceless, anonymous, illegal campaign contributions that fought this,” McKiernan said.

Roman Porter of the FPPC said Dalidio’s complaints are still part of active investigations and he couldn’t comment in detail, but added both cases should soon be closed.

Dalidio filed a similar legal complaint with the SLO Superior Court against the Downtown Association, the LLC, and individuals involved in the campaign, but the case was dismissed while the Measure J case was in federal court.

Dalidio’s legal team isn’t the only group talking about precedents. Opponents of the project worry that condoning voter approval—as opposed to the typical city and county planning process through which such development typically works its way—will set a tone for future developments. Brown said his group’s motivation has been “to have whatever development occurs follow the master plan in the city and pay attention to the quality of life in San Luis Obispo.”