There's a new gardener in town

Television networks, like celebrities, carefully craft an image for themselves, playing to a target demographic. Lifetime promotes itself as “television for women” or, television for idiots, according to Family Guy. Conversely, Spike TV sets its sights on the young adult male crowd with high-energy programming, like Ultimate Fighting, designed to get the testosterone pumping. For SLO County television viewing audiences that like to sleep, there’s the Public Access station. 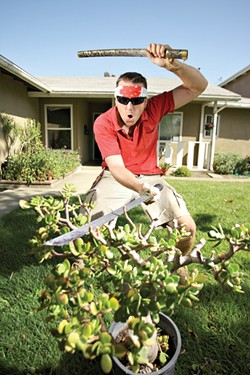 Public Access producer Morgan Hunt is hoping to single-handedly overhaul the station’s image with his gardening show, The Gardenator. But first, he’s going to have to convince people to watch. The program, which will probably never be referred to as either PC or cultured, began as a senior project for the landscape architecture student.

“It seemed like every idea I came to someone with got shot down, so I thought, ‘What do I really want to do?’ and the answer came to me—a gardening show as my senior project,” Hunt explained. “I’ve always loved being on camera. I just never pursued it because you don’t get paid very well. It’s good to learn a trade so you can always fall back on something.”

But selecting the topic for his senior project was just the beginning. Faculty members in both the theater and TV media departments offered to assist Hunt but refused to serve as his advisors on the grounds that they didn’t possess the necessary knowledge to judge the accuracy of the horticulture information presented in the program.

Eventually, Hunt found himself an advisor and borrowed the necessary equipment to create his half-hour show about weed abatement. The horticulture department insisted that he edit out objectionable content, referring to a scene in which Hunt brandishes a weed whacker while not wearing any pants. The senior project was completed in June of 2007, but the Gardenator had just begun.

After a visit to the Public Access Television Web site, Hunt met with Dave Baumgarten to discuss the requirements to produce a television show. Before producers are allowed to air a new show, they must first complete two episodes. For his second installment of The Gardenator, Hunt paid a visit to the SLO Home and Garden Expo at the Madonna Inn. The first episode aired in December of 2007, and he has now aired five episodes of his program.

Despite the fact that The Gardenator diverges significantly from standard television fare, Public Access representatives never expressed any concerns about the show’s content. Equal parts Jackass and Martha Stewart, it was never a given that the council of do-it-yourself television producers would accept The Gardenator.

“I’m sure personal opinions varied,” acknowledged Hunt. “But it’s nothing vulgar. A lot of horticulturists, if you ever talk to them, they’re not the most bright, lively, fun people, so that’s what they wanted with my senior project video; something strict, by the book, and I’m going for something completely different—exciting, entertaining, and educational.”

It’s not at all uncommon for Hunt, who owns Morgan Hunt Landscaping, to spend more than 30 hours filming a single show. While working on the initial episodes, Hunt had someone assisting him with the camera, but now he does pretty much everything on his own. He borrows the camera from Public Access and uses his computer for editing. Generally, he estimates that he spends eight to 10 hours filming each episode, and 20 to 22 hours editing, breaking down to one hour of work per minute of the show. That figure decreases as Hunt becomes increasingly familiar with the technology, although it can also escalate, depending on the amount of planning he wants to put into a particular episode. He recalls one show, a golden episode, in which he wrote the entire episode and then read it off note cards. It was, he insists, his best episode, though he’s not sure whether he’ll invest the same amount of time in future episodes.

But behind the show’s macho tone and Hunt’s obvious frustration, there is some educational content. A list of potential future episodes includes such topics as transplanting plants, plant propagation techniques, fertilizers, and tree care.

Characters like Captain Safety and Professor Chlorophyll offer useful gardening and safety tips. All of them, incidentally, are Hunt wearing an eye patch or talking like an early ’90s sitcom geek. In one notable scene, Hunt places safety goggles on a watermelon and hurls rocks at it in order to demonstrate the significance of utilizing certified safety glasses. As Judge Morganator, essentially Hunt wearing his graduation gown, he interrogates a plant called agave Americana and goes on to accuse another plant of being nude in the courtroom, demanding that it be potted immediately. At one notable point, Hunt unsheathes a samurai sword and proceeds to leap about, hacking away at weeds to the vocal “everybody was kung fu fighting” in the background, the lyrics, “it was a little bit frightening,” being particularly appropriate.

Hunt’s playful, creative approach to producing his show extends to his music selection. Def Leppard’s “Pour Some Sugar on Me” livens up one segment, while Hunt has used everything from Tupac to hard rock to country music. Metallica blasts through scenes of high speed mulch shoveling. Future episodes might even include some classical music.

Initially, it might be easy to doubt the show’s sincerity, particularly as Hunt indicates a particular clip from a past episode, explaining, “this one I experimented with drinking and filming…it went alright.” But, watching Hunt’s filming process, and seeing the finished product, which expertly—though seemingly accidentally—interweaves humorous stunts and characters with useful gardening tips and information, it’s clear that there’s more to this producer than you may think.

He turns to the camera to film one last scene, adopts his booming camera voice, puts on a face shield, and makes a Star Wars reference before expressing concern that one of the neighbors has been secretly listening in on the filming. Then, he decides that maybe it would be better if they were, instead of him filming alone in the backyard. Then he changes his mind. It’s a debate that may never be satisfactorily resolved.

The Gardenator runs on SLO Public Access, channel 2, Saturdays at 9 p.m., Sundays at 9 a.m. and Mondays at 3:30 p.m. For more information contact Morgan Hunt at lndartist1@yahoo.com.