There's always more to the story 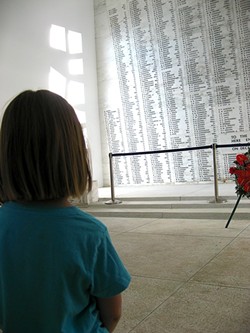 Until March 10, Pearl Harbor was, to me, the setting of a story, relegated to black-and-white photos in history books. Pearl Harbor was a day on the calendar: Dec. 7, “a date which will live in infamy.”

I had only the lessons in school to thank for keeping the setting and date alive in my memory, albeit in a two-dimensional way. And now I’m thankful on a new level for the men and women who strive to keep alive the collective memory of the events of Pearl Harbor and all it stands for.

I am also grateful to have read more World War II stories in the March 13 issue of New Times’ sister paper, the Sun (“Honoring the brave”). I was especially struck by Arroyo Grande resident Ruth Gwin’s determination to join the military after the attack on Pearl Harbor, which coincided with her 22nd birthday. When she signed up for the Women’s Army Auxiliary, Gwin wasn’t a veteran—she didn’t yet know what we now take for granted, what most of us see only in history books. She stepped forward into the story because she “felt that it was [her] patriotic duty.”

My family and I visited the military memorial and historic sites as part of our Hawaiian vacation in early March. We traveled with a friend who ranked Pearl Harbor high on her list of things to do while on Oahu, and I’m glad she did. Without her prompting, I might not have taken my young daughters to the memorial.

I didn’t really know what to expect. I’d seen pictures of the white, angular memorial built over the sunken remains of the USS Arizona, but that was about all I knew of the site. What we found was a collection of war memorials and museums, decommissioned weapons on display, interactive exhibits, artwork, and a menu of tour options.

We opted for the free tour, which featured a showing of a mini documentary and the boat ride to the memorial. Before taking our seats in the theater, we toured the grounds for several hours. I had mixed emotions as I witnessed my daughters climb aboard weapons the size of playground equipment and flip switches inside the control center of a submarine. All of the decommissioned weaponry bore signs inviting interaction. Perhaps now when my girls read about World War II, they’ll remember the feel of anti-aircraft foot pedals and recall the length of torpedoes.

The film we watched painted a broad and even-handed picture of the war and the two years leading up to the United States’ involvement. My 7-year-old wrote in her travel journal for school that “the war was bad.” My 4-year-old, two weeks after our visit, mentioned to me the “movie about the war” and “all the people in it.”

At Pearl Harbor, I watched the film and walked through the memorial not as a former journalist seeking to collect data and facts. I viewed the sites as a U.S. citizen who grew up comfortable and secure, as a mother and wife, as a tourist. I remember feelings and all that my senses took in.

The mood on the boat ride to the memorial was subdued; 150 passengers from around the world reflected on the movie and anticipated what we were yet to see. I remember blue—water and sky. I remember feeling quiet. I remember that one side of the memorial smelled strongly of fuel, and I saw the oily sheen on the water’s surface above part of the wreckage. I remember the hush of the crowd viewing the memorial wall, which flowed with the names of those who died on the Arizona. I remember the windows of the shrine room, sculpted as a stylized Tree of Life.

My nose itches and my eyes brim with tears as I remember. I hope that from now on, when I hear the words “Pearl Harbor,” I won’t forget stepping into part of the story to experience the heat and humidity, the pungent tang of fuel, the white wall of names, and the juxtaposition of my daughters playing on anti-aircraft artillery.

Andrea Rooks lives in San Luis Obispo and is the New Time’s proofreader. Send comments to the executive editor at rmiller@santamariasun.com.