There's got to be a morning after ...

... if we can hold on through the night

It’s Saturday, Nov. 26, and I feel like I’m wrapped in gauze. A dog licks my face, but I’m too wounded to move. What happened?

I stumble out through the living room and into the kitchen, where it looks like a category 5 foodnado swept through, flattening bowls of salad and distributing hors d’oeuvres along its path of destruction.

There’s a carcass on the counter that may have been attacked by piranhas. Glasses and bottles are everywhere. And the dishes! Oh Lord! The dishes! There’re snowdrifts of them, piled high on every surface. I spread a sea of gunk-covered bowls and find my way to the coffee maker, make coffee and stumble back to bed. I just can’t face it yet. Not yet.

As I lay in bed, I begin to piece the night together. It was Friday morning at about 10:30 when my fiancée and I finally got around to shopping for the Thanksgiving After

Thanksgiving Thanksgiving, our  annual Black Friday extravaganza. We hit Smart and Final, Trader Joe’s, Food 4 Less, and Costco before heading back home with a truck packed with enough food to satiate a squad of competitive hotdog eating champs.

After feverishly getting the house in order and much of the food prepared, guests started to arrive at 2 p.m., and I dropped the first turkey into the deep fryer at 3:13 p.m. With a whoosh of sizzling oil, a gaggle of semi-panicked onlookers watched as hot grease leapt out of the pot.

Suddenly dogs appeared near my feet.

“Out, dogs,” I yelled, pointing back into the house, which confused the dogs and some guests, who thought I was yelling  at them.

Meanwhile I was cooking hot links and tri-tip on the barbecue, and there was a ham in the oven, and I could hear the blender whipping up margaritas, and people were talking and laughing. Yes, it was all coming back to me.

The best day of the year isn’t Thanksgiving or Christmas or the first day of summer. No, for me, it’s the Friday after Thanksgiving when old friends and new head to my house for this tradition now 15 years in the making. Forget the crass commercialism of Black Friday and embrace something real, like my great friend and artist David Settino Scott, who arrived with a bottle of Jameson and quickly poured a generous dollop over ice (he’d had a tough day, but it all melted away as he chatted with friends). 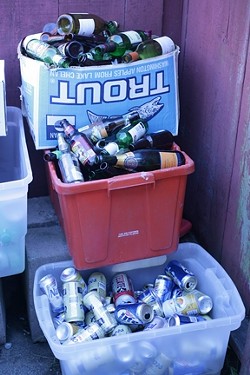 Then I saw artist Peg Grady and musician Don Lampson, who made the trek from Santa Margarita. Artist Mark Freear rolled in with his beautiful new girlfriend Jodi Tatreau. Poncho and Kristen Meisenhimer showed up spreading sunshine. Bassist extraordinaire Tyler Mitchell was there with an old friend, Darren, who I haven’t seen in years. This is what I’m talking about! Friends coming out of the woodwork!

And the Pottmeyers! Adam and Erin! I love those two party animals! And thank God for Linda Castellon and her brother John—both professional chefs who lent a hand with the food. And there’s Joni Muller and her boyfriend Michael, and my longtime friend Ashleigh Anderson, who I saw grow from a fledgling artist into a Hollywood special effects expert.

And, whoa! The clothing designer Francisco Castro showed up, as well as New Times gang Steve E. Miller and Matt Fountain. And there’s Chris and Inky Wine, who I met at “That ’80s Thing.” And there’s environmental lawyer Babak Naficy, who brought some fish with their heads still attached! And the amazing photographer Barry Goyette and his amazing fiancée Jody Mellow. And Deeds of Flesh drummer Mike Hamilton. Musician Mike Souza! Lynt publisher Steve Quick! It’s a freakin’ who’s who of artistic SLO County!

Ragg members Anthony Bolin and Monique Grajeda made it. Dead Volts member Shawn Hafley and his gorgeous wife Cyndi were there. Even Shawn’s mom Haila and her husband and awesome woodworker Clark Kluver showed. And sweety and stylist Aurajoy Van Dyck was there. And another favored stylist Tracy Hall! And former Mardi Gras queen Elaine Genasci.

And amazing singer-songwriter Jody Mulgrew came and serenaded us with song while his wife, the painter Adrienne Allebe, looked on adoringly. And my pals the car guys Keith Bond and Steve White were there. Of course my gorgeous wife-to-be Anna and her brother Corey and his girlfriend Danielle made it. I know I’m forgetting people, but yes, it’s all coming back to me.

Best. Party. Ever. Now it’s time to tackle this mess, which is totally worth the memories. I’m thankful for friends.