A couple of years ago my father-in-law Gary Robertshaw, the Live Oak Music Festival official staff photographer, bought my wife and me a new tent. This sucker is so big it fits our full size blow-up-mattress-topped cot and has a roomy sitting area for two chairs and a table. It’s so big it has a wine cellar. It’s so big that smaller tents orbit it. When our tent steps on a talking scale, the scale says, “One at a time, please.” It’s that big. So I’ll hardly feel like I’m camping this weekend at the Live Oak Music Festival from Friday, June 13, through Sunday, June 16. Even if your tent isn’t palatial, you can still have a super awesome time at this year’s festival, and as of Tuesday, full festival camping tickets were still available (liveoakfest.org). Daytrippers are also welcome!

During the last couple of weeks, I told you about the two acts I’m most looking forward to: JD McPherson on June 14 and Dave Alvin and Phil Alvin and the Guilty Ones on July 13, but there are so many more great acts this year. If you’ve been listening to Neal Losey’s Morning Cup show on KCBX 90.1FM every morning, he’s been spinning a bunch of this year’s performers.

That’s a whole lotta music genres to enjoy, and the festival atmosphere, the great food vendors (we barely bother bringing our own food anymore), and the great people the festival attracts has made this an annual tradition for me. There’s a ton to do for kids, lots of camp jam sessions, and generally speaking beautiful weather (my weather app says low 80s!). Come on down to this big annual fundraiser for your local public radio station, KCBX!

Even though dulcet-voiced charmer Jody Mulgrew now calls Nashville, Tenn., home, I barely miss him. He’s been back so often, thanks in part to the impending release of his new album Let Them Talk, which will be officially released on June 17.

The 10-song album features his backing band the Skeleton Crew (aka Sebastian Luna and Anthony Langston), recorded live in the Santa Ynez Valley with backing vocalist Bear Erickson over the course of three days at the end of 2013.

“We recorded the new album the way that we play our music: In one room, all together at the same time, making the occasional, inspired musical mistake,” Mulgrew said on the band’s website. “We wanted to capture that skeleton crew sound, so our buddy Bear (Bear Erickson of Erickson Sound Labs) let us set up in his studio the way that we rehearse: monitors on the floor, surrounded by our amps and instruments.”

The album has a raw and immediate energy that reminds Jody of early rockers like Buddy Holly and Bruce Springsteen and the E Street Band. In fact, his recent cover of Springsteen’s “Dancing in the Dark” from his last EP received national radio airplay.

“You can hear the sounds of the room sneaking back into the microphones: the drums echoing off the walls; the crackle of the speakers; the floor creaking under the weight of the performance,” he said.

The first seven songs they recorded were slogged out in Erickson’s un-air-conditioned studio space on the hottest day of the summer, and some songs, “like the moody re-interpretation of the Johnny Cash classic ‘Ring of Fire,’ ‘I Got Stoned’ penned by Mulgrew and songwriter friend Derek Senn, and Buddy Holly’s ‘Crying, Waiting, Hoping’ were played through only one time,” according to press materials.

The other three tracks were cut on two chilly December days, including a love song Mulgrew wrote in Tennessee titled “California Wait for Me,” and the album’s first single, “Girls Gather Round.”

Added Mulgrew, “We wanted to capture a moment in time, like a musical snapshot. Do it once, give it all you got, and move on.”

The few overdubs they added included organ by U2’s Terry Lawless on the title track and “I Got Stoned,” and backing vocals by engineer Bear Erickson.

“When it came time to overdub, we forced ourselves to do it fast, do it once, and not overthink it. It was so dang hot and freezing respectively during the sessions, that all we wanted to do was play our best as quickly as possible, and then get into the nearest climate-controlled room and brace ourselves for the next song,” Mulgrew added.

As is typical of Jody, this is great work—energized, at once familiar yet original, and filled with Jody’s voice, a great voice! A nearly genderless voice! Apparently he’s been working with renowned Nashville vocal coach Ron Browning and “writing new songs and eating a lot of stewed greens and fried chicken in preparation for the next set of recordings.”

Jody Mulgrew plays a solo acoustic album release this Friday, June 13 (a full moon on Friday the 13th? Gulp!), at the Steynberg Gallery (7:30 p.m.; $15 suggested donation; call 547-0278 for reservations). See him with the full band when Jody Mulgrew & the Skeleton Crew plays next Thursday, June 19, at the Wise Owl in Cambria at 7 p.m. (suggested donation of $10).

Headlining act SOJA is a reggae band, but I dig what lead singer-guitarist Jacob Hemphill says about what it means to be a “folk” artist: “To me, Rage Against The Machine, Wu-Tang Clan, Sade, Johnny Cash, Bob Marley—they’re all folk artists. There’s no difference between Raekwon saying, ‘I grew up on the crime side, the New York Times side, where staying alive was no jive,’ to Bob Marley saying, ‘Cold ground was my bed last night and rock was my pillow, too,’ to Johnny Cash saying, ‘I know I had it coming, I know I can’t be free, but those people keep on moving (around) and that’s what tortures me.’ Folk is all about storytelling and passing on a legacy. It’s timeless, it’s limitless, and it crosses all boundaries. That’s what this band is striving for. It’s a tall order, but we’re making our way.”

Should be a great afternoon! 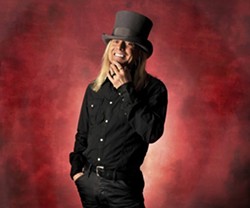 “Imagine if you could construct a killer rock group, using the best musicians from any band within the past 30 years. You’d choose a rattle-your-fillings lead singer, a guitar player capable of screaming riffs, a fret-shredding bassist, and a thunderous drummer to keep the beat. That’s exactly what Robin Zander did when he assembled this group of monstrous talent, The Robin Zander Band,” his bio says.

He’s got Mark Hitt, guitarist with The Tubes and John Bonham of Led Zeppelin, Jack Bruce of Cream, and more. He’s got Larry Hobbs of The Juice to play bass, and long time friend and drummer Steve Luongo, who has performed or recorded with John Entwistle/The Who, members of AC/DC, Todd Rundgren, and Leslie West/Mountain to name a few.

“We just want to go out and have a ball and who knows what special guests might just show up on stage,” Zander says in press materials.

Can you handle the fame, the accolades, and the smoking hot groupies? Because you get all that and more when you win a Newtie! The sixth annual New Times Music Awards returns on Thursday, Aug. 28, at SLO Brew (7 to 10 p.m.), and starting this week New Times will accept submissions until the deadline on Monday, July 7, at 5 p.m.

(Attention reggae artists: Get your shit together! Last year we had to cancel the reggae and world beat category due to a lack of submissions. Put down the reefer, mark your calendars, and submit to this year’s “open” category. If we get enough reggae submissions in the “open” category this year, the reggae and world beat genre will return next year).

You can enter up to three original songs in each of the following categories: country/Americana/folk; R&B/blues; rock/alternative; hip-hop; and open (reggae, world beat, jazz, classical, klezmer, kazoo orchestras, whatever!). You may also enter up to three original songs in the songwriting competition (lyrics must be included). And you may enter one album released between July 2013 and July 2014 for the album of the year category.

Each song or album entry costs $10. Enter online by following the link on the New Times website, newtimesslo.com, or fill out the entry form located on page 2 of this issue, and drop off or mail your submission to our offices at 1010 Marsh Street.

A Readers Choice Award will be voted on from July 31 through Aug. 11. Tell your friends to vote early and often, cheat, pay for votes, create a program that blows up the Internet—it’s in your hands.

Find out if you’ve got what it takes to bring home a bronze Newtie, and good luck!