These heels aren't made for walking 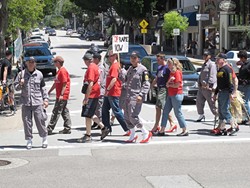 They say you can’t truly understand people until you’ve walked a mile in their shoes, experienced their struggles, and seen the world from their point of view. It’s usually damn near impossible and purely hypothetical, but the folks at the Sexual Assault Recovery and Prevention (SARP) Center have taken the idea quite literally and marched with it.

The group’s ninth annual Walk a Mile in Her Shoes event took place on April 30 at Mission Plaza in downtown SLO, and it gave men a chance to see how it feels to cram their feet into tiny high heels and tip-toe about town. (Spoiler: It hurts.)

The flier promised family-friendly activities, so I brought my 6-year-old daughter along. It felt a bit odd bringing a kid to an awareness campaign for something as horrible as sexual assault, but they had a bounce house, which, to Layla, is the solution to all of life’s problems. There was also a shoe-decorating tent and a musical instrument petting zoo hosted by the San Luis Obispo Symphony, co-sponsor and co-beneficiary of the event.

While Layla bounced, I talked to organizer Kristy McCray, who works at the SARP Center and described the counseling services and 24-hour help line the group provides for anyone who’s been hurt by sexual assault.

“SLO is a very safe community, but assaults do happen,” she said. “We’ve helped about 300 survivors a year for the past six years. The numbers aren’t rising, but they aren’t going down either.”

She said the only way to prevent an attack is for the perpetrator to change his mind and decide to stop. That decision can be aided by pepper spray and a swift kick to the groin (And, just to start the conversation, I say we castrate convicted offenders. Write your senator.), but the main problem to address is the often subconscious perception that women exist to serve men and don’t really have the right to object. 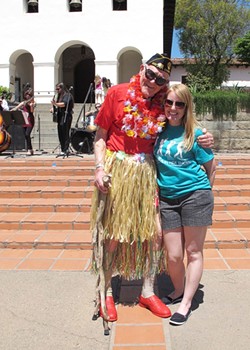 And walking a mile in their shoes really drove that perception home. As we started to hobble down Higuera, we groaned and laughed at ourselves, waving signs and shouting at onlookers, but about half a mile in, things got quiet.

My feet really hurt. I’d lost skin from both of my ring (?) toes and started to realize how much our culture stresses the idea that a woman’s comfort and happiness aren’t important. It’s obviously not just high heels. It’s also the huge display of ladies in lingerie at Victoria’s Secret that no one seems to mind and countless other pressures that tell women to look pretty and act stupid, to submit to men’s desires and be second-class citizens.

I guess I’ve acknowledged that concept before, but it never really stuck until I was wearing the heels, walking beside my young daughter, and looking at the world where she’ll grow up. It doesn’t have to be this way, but if it’s ever going to get any better, we can’t treat sexual assault like some dirty secret. We have to address it in broad daylight and stop tolerating the everyday objectification that makes it unacceptably common.

Contributor Nick Powell has blisters on his piggies. Give him a nice foot rub at npowell@newtimesslo.com.