They walk the line

Protesters can make a hard decision even harder for women seeking an abortion, but escorts help them get through

For at least six years or probably as long as there have been protesters outside of the Planned Parenthood office in San Luis Obispo a group of volunteers has made itself into a literal barrier between women seeking abortion services and a persistent line of demonstrators. 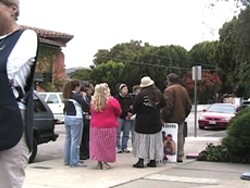 # A core group of activists, bearing pamphlets and bits of scripture, assembles in front of the office just about every week. Their goal is to keep women out of the clinic and to discuss options other than abortion.

Though abortion accounts for only about five percent of services provided by Planned Parenthood, it remains a major source of criticism and conflict. The organization reports on its web site that, in the United States alone, an average of 1.3 million abortions are performed each year, representing almost a quarter of the total pregnancies in the country.

While women considering an abortion have several options, Yolanda Robles, center director for SLO's Planned Parenthood, explained that a surgical procedure called D&C (for dilation and curettage) is typically what people are talking about when they discuss abortion.

"It's done for a lot of reasons other than abortion, so it's something that all OB-GYNs are trained to do, but most don't because they don't want to deal with the backlash," she explained. "They don't want the picketers and the protesters outside their business. It's understandable."

San Luis Obispo is home to the only health center between Salinas and Santa Maria that offers abortion services, Robles said, making it a singular target for protesters. While cities like San Francisco have taken steps to protect the privacy of clients by enforcing a 100-foot no-protest bubble around churches and health clinics, SLO has no such ordinance. In fact, the clinic's door sits just off of the sidewalk on a main thoroughfare. Women who enter have very little privacy as they step through the doors. Conversely, protesters can legally demonstrate from the sidewalk about 10 feet away, hoping for one last opportunity to approach women immediately before and after a procedure.

Enter a small band of volunteers, who position themselves as the only barrier between emotionally delicate women and protesters who've been known to be quite zealous. Their job is simply to escort the women and their families in and out of the clinic safely.

It's not always as easy as it sounds.

At no time are escorts supposed to touch protesters, because such contact could be interpreted as assault. The two groups find themselves face to face every week, but there's rarely discourse. The protestors hardly ever approach the escorts (who, after years of this task, know the demonstrators' names), and rarely if ever do volunteers approach the protesters.

They're not bouncers. Their primary purpose is to provide emotional support and to keep the peace, peacefully.

"It takes a really special person to volunteer for us," Robles said. "They have to remember that the protesters are never going to see our point of view. And we're probably never going to see theirs. It's not the place for a debate.

"We don't want to make this a battleground," she went on to say. "Their main purpose is to make sure that our clients can get into the clinic safely."

There are currently five or six individuals who volunteer as escorts on surgery days, but sometimes only one will be present. When this happens, the protesters tend to become more aggressive especially if the volunteer is a woman, said two escorts, who asked to remain anonymous.

"We try not to talk to them," said one escort who's been volunteering for six years. "For the most part, we just ignore them and focus on the patient. We try to reassure them, tell them that they don't have to talk to the protesters or take anything from them."

Protesters come armed with posters of dismantled fetuses, religious-based literature, and signs. Sometimes they chant and pray and follow women to their cars. The escorts reported that one of the semi-regular protesters has been known to bring children who hit their knees and pray as the women walk past.

"We always tell people when they call on the phone that there will be protesters," Robles explained, "but most women have already made up their minds. Clients tell us that [protesters] make it more difficult, and it's already a difficult choice to make. But they have a right to be there."

The training to become a Planned Parenthood volunteer escort takes about half a day, during which trainees learn the history of protesting and demonstrators' rights versus patients' rights. They learn ways to neutralize tense situations and deter aggressive solicitation by remaining calm and keeping attention on the patients.

Before escort training can begin, hopefuls must go through an application process and background check. The most important thing for an escort to be, Robles said, is pro-choice. Many volunteers come from a social service background, and Planned Parenthood sometimes sees pre-med students become clinical volunteers. The interview process takes place in Santa Barbara at the main Planned Parenthood office for San Luis Obispo, Santa Barbara, and Ventura counties, through the human resources department.

"We always need volunteers, because there are so many places we can use them," Robles said. "That includes escorts, but we also have space for people with other interests."

INFOBOX: How can I help?

Intern Kylie Mendonca can be reached at ohkylieo@yahoo.com.