They'll burn for you

Whether you’ve known them since they were called Johnny Peebucks and the Swingin’ Utters or know them as $wingin’ Utter$, the Fat Wreck Chords recording artists now known as the Swingin’ Utters have earned their place in the punk rock pantheon. Since 1992’s Scared and right on through to 2011’s Here, Under Protest, the Bay Area-based quintet has delivered blistering punk rock with all the glee of an arsonist with a can of gasoline and a brand new pack of matches.

Last year, the band got its due with a tribute album, Untitled 21: A Juvenile Tribute to the Swingin’ Utters. What’s next? A Weird Al parody? Bottom line: These guys are the real deal, creative to a T, irreverent from top to toe. Let’s let their bio do some talking!

“Man, these days everyone with a chipped tooth and a bad haircut says they’re street punk. It’s almost gotten to the point where it just seems like gimmickry, like being bi-polar or good looking. But once in a while, a dude who works in a warehouse gets together with a truck driver and makes shit kickin’ punk rock songs so ball-smashingly radical that they end up getting the guys from Me First and the Gimme Gimmes and One Man Army to help ’em sing, and the end result is everybody’s favorite San Francisco institution that isn’t completely riddled with glory holes, the Swingin’ Utters. I know what you’re saying: What the fuck am I doing reading a Swingin’ Utters bio in 2011? Sure, they’re pretty much the trailblazenist band that ever decided to put grandpa’s banjo and spittoon next to the Marshall full stacks and the booze, but what have they done lately? Well, I’ll tell you, you impudent young whippersnapper. They’ve recorded Here, Under Protest, the single best album of their already award-winning career (handsomest ballsack on a punk, 2001-02 [Darius]) and that’s saying something. It’s, as Ron Burgundy would attest, a pretty big deal.”

After this show, the Brew will take a nice weeklong Thanksgiving break, returning on Wednesday, Nov. 30, with Allen Stone (8 p.m.; all ages; $10). I haven’t heard of Stone, but his bio says this: “From backwoods barbecues and community gatherings, Allen Stone emerges to share personal melodies, telling his tales of life after just 24 years. Getting his start singing at his father’s church in small-town America, it wasn’t until later when introduced to the greats of soul music (Marvin Gaye, Aretha Franklin), and then to the confessional lyrical fashion of the ’60s and ’70s singer-songwriters, did music begin to ignite intense passion, eventually carrying this boy to a musical home.”

It’s that time of year, which means Cambria’s Pewter Plough Playhouse is set to deliver another great musical extravaganza, this year celebrating the music of George and Ira Gershwin. 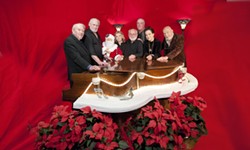 Staring on Friday, Nov. 25, and running through New Year’s Eve, witness Fascinating Gershwin, one of the Playhouse’s most popular musicals, which I saw in 2005 and can tell you it’s well worth seeing!

Written and directed by Jim Buckley, who will be celebrating his 99th birthday during the show’s run, it’s being revived in time for the holidays. Back when I saw it, it was called ’S Wonderful!: A Holiday Bash for George and Ira Gershwin, but the title was changed to accommodate the Gershwin family.

Here’s a bit of what I wrote about it in 2005: “The set-up is simple: Six friends—all lovers of and experts in everything to do with George and Ira Gershwin—gather in the piano bar/sidewalk café of New York City’s Music Box Theatre located west of Broadway on 45th Street. It’s the first and only meeting of the Gershwin Society, and the six talented friends have come to wow each other with their knowledge of the talented brothers and their prowess with the brothers’ material—songs now firmly entrenched in the Great American Songbook.

“With compositions such as ‘Rhapsody In Blue,’ ‘Summertime,’ ‘Of Thee I Sing,’ ‘A Foggy Day,’ ‘Embraceable You,’ ‘Our Love is Here to Stay,’ ‘The Man I Love,’ ‘Someone to Watch Over Me,’ and ‘A Stairway to Paradise,’ it’s hard to overestimate the importance of George and Ira Gershwin, and the cast of Fascinating Gershwin gives appropriate reverence to the songs, not straying outside conventional—and beloved—interpretations.

“The cast is a varied group with very different voices, creating a sonic tapestry that avoids monotony despite the common source of material. Jim Conroy’s rich baritone is by far the most powerful of the voices, and the most controlled and nuanced. In comparison, Wayne Attoe’s reedy tenor sounds a bit thin, but his chipper demeanor and restrained delivery is a welcome contrast to Conroy’s sometimes overwrought posturing. Pianist David Manion plays a wicked good piano, and his voice—an earthy alive thing that reminded me of Satchmo—delivered the most surprises of the evening.

“On the ladies’ end of things, Viv Goff offered a lispy sophistication and exhibited an innate handling of Gershwin phrasing and sultry balladeering, while Laurelle Barnett brought a breathy sexuality to some tunes and a perky energy to others. The real show stopper, however, was Jim Buckley himself, a crusty old fellow who at 93 [now 98!] has more stage presence than any one man should be burdened with. Buckley, teetering around stage with his cane, didn’t look like he could make it through the evening, but when he busted out ‘He Loves and She Loves’ in a duet with Goff, the crowd went absolutely wild, and Buckley danced a little jig as he shuffled to the rear of the stage amid raucous applause.”

The last time I saw Jim, he was in a wheelchair, so I’m not sure if there’ll be a little jig, but trust me, this is a great show with unforgettable music.

Contact the box office for reservations at 927-3877 or visit pewterploughplayhouse.org and order your tickets online.

On their way up 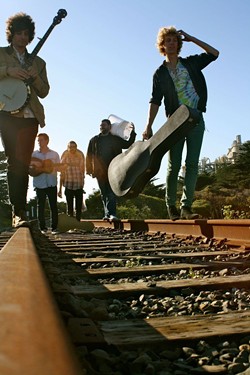 Oakland-based Americana indie rock act Tumbleweed Wanderers will tour through SLO Town in support of their self-titled debut EP, hitting Frog and Peach on Sunday, Nov. 27, just one stop as the band hits 21 venues in 22 days. The band has built a following in San Francisco, Berkeley, Oakland, and the North Bay by busking outside venerable rock music halls like the Fillmore and the Greek Theater, as well as opening for such local pillars of music as the Starry Plough and the Boom Boom Room.

Are they big enough to headline a tour?

“It’s an audacious move from a group of ‘kids’ ranging in age from 20 to 25 who play Americana in a personal and stylized manner fit for the modern age yet true to its roots,” says their bio. “Their youth belies the craftsman-like approach they take to their music, which regularly draws an appreciative audience comprised of college students and Baby Boomers alike. As one elder hipster, apparently in the know, was overheard saying after a recent show: ‘They approach music differently than we did. Where we worried about whether or not we had the talent to play certain pieces, they figure practice and more practice is assuredly going to get them there. And with them,
it does.’”

From folk to bluegrass, from R&B to soul and classic rock, this group of musicians hops from instrument to instrument with ease, and delivers sometimes haunting vocal harmonies. Check them out.

The holidays aren’t going to stop Steve Key from bringing you a whole heapin’ helpin’ of fantastic singer-songwriters during his Songwriters at Play showcases, starting with father and son folk duo Young Ireland on Sunday, Nov. 27 (1 p.m.; all ages; pass the hat).

“One of our most popular local bands, Young Ireland, takes the headlining spot in our showcase at Sculpterra Winery,” said co-producer Bonnie Nelson. “Young Ireland was formed in 2010 by a family of first- and second-generation Irish. Father-son duo Patrick and Michael O’Hara perform original music inspired by Irish folk tradition relying as much on the storytelling as the instruments. Their ballads reflect the spirit of the Irish struggles and traditions from the 1600s to the modern day.”

“Originally from Maine, Amber grew up surrounded by gospel music in a small town church where her father still preaches and her mother plays piano,” Nelson said. “Commonly referred to as ‘The little girl with the big voice,’ Amber’s original old-time style has been likened to that of an old Smithsonian recording. She writes from her own life struggles and experiences, delivering her stories with unforgettable power and emotion. Her major influences are Hazel Dickens, Iris Dement, Rose Maddox, Tom Waits, Greg Brown, and the Carter Family.”

Cross now lives in Arroyo Grande and has been a regular at Molly’s Revenge member Stuart Mason’s Old-Time Fiddle & Banjo Shows. Check her out! As usual, all showcases feature other performers playing four-song sets.

“These are two phenomenal musicians, both with enormous breadth in ability and imagination,” said concert organizer Aaron Wolf.

Benjamin is perhaps the best known of the pair, who was recognized as a Rising Star in Jazz in Downbeat magazine’s critics and readers polls for three years running. He’s also a founding member of Kneebody, an electric quintet widely recognized as one of the most unique ensembles in jazz. “Their 2009 Grammy-nominated release is a radical reinvention of the songs of Charles Ives in collaboration with singer Theo Bleckmann. Their current release You Can Have Your Moment is the fourth full-length album” from the quintet, according to bio materials, which added that “Red Oak Duo is a natural synthesis of jazz and country. A sophisticated jazz vibe intertwines with the pastoral sounds of country and folk to create a unique and evocative portrait of modern-day America.”

In the tradition of great jazz duos like Bill Evans and Jim Hall, expect “the natural balance of Nilson’s simple melodies spiked with harmonic intricacies, and Benjamin’s imaginative and clever approach.” 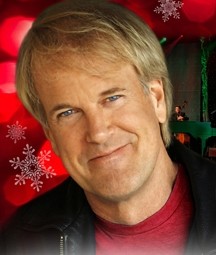 Like Yanni, John Tesh is one of those performers people like me love to make fun of due to his ridiculous good looks, sappy musical taste, and complete lack of irony when irony would really be welcome (think Tom Jones, who knows all about irony).

The master pianist will perform holiday classics with all new big band arrangements for an 11-piece rhythm and horn section. Hear “Sleigh Ride,” “It’s the Most Wonderful Time of the Year,” “I’ll Be Home for Christmas,” and “Let it Snow,” as well as solo piano versions of “What Child is This?” “Jingle Bells,” and additional selections from his new Christmas CD, Big Band Christmas.

“I grew up listening to the jazz greats with my parents when I was a kid on Long Island, and I’ve always believed that the ‘big band swing’ style of Christmas arrangements is the most exciting way to present this music,” Tesh said in press materials. “It truly takes you back to the early 1900s, when these arrangements defined our culture. The idea behind this new Big Band Christmas tour is to swing the audience [into wishing] they [could] leap from their seats and dance in the aisles. It is our mission, our purpose, and our promise for Christmas 2011.”

Blues masters the Dr. Danger Band, who won first place in the Blues and R&B category of this year’s New Times Music Awards, bring their fat and sassy sound to the SLO Down Pub on Friday, Nov. 25.

“It’s a great time to burn off all those extra calories on the dance floor!” enthused pianist Brent Dannells. “We’ll be playing our usual mix of classic blues, rock, and soul inter-mixed with our originals, including the song that won us best R&B this year.” This 7:30 p.m. show is free!