Think outside the page 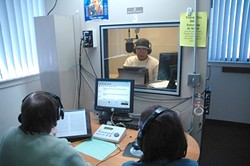 Here’s the deal: You’re blind, and you want to find out what happened to Harry Potter in the last book of J. K. Rowling’s series, so you check out a stack of CDs from the library and let narrator Jim Dale’s crisp British accent bring the halls of Hogwarts to life.

A few chapters in, you realize you should probably be doing your homework instead, but Houghton Mifflin’s An Introduction to Physical Science isn’t as readily available as are tales of the boy wizard.

Enter Recording for the Blind and Dyslexic.

Members of the national nonprofit aim to get textbooks, schoolbooks, and, yes, even fiction like Harry Potter into the hands of students with visual impairments or learning disabilities. Thus, such academically inclined titles as Stefan Waner’s Applied Calculus and Richard Clogg’s A Concise History of Greece make the leap from paper to headphone, along with study guides, software training workbooks, and titles from summer reading lists.

“We have the nation’s largest collection of audio textbooks,” said Tim Owens, executive director of the nonprofit’s Central California unit, based in Santa Barbara.

For $35 a year, plus a $65 initial registration fee, individuals can tap into that collection of almost 47,000 digitally recorded books, which, for copyright reasons, essentially acts as a national lending library. Schools can participate at an entry level for $350 a year.

All of the audio materials are digital, and can be downloaded onto computers, MP3 players, and even phones. The nonprofit also sells players, software, and accessories.

That baker’s dozen of students missing out includes some with dyslexia, some with cerebral palsy, some with visual handicaps, and some with combinations of learning delays. The blanket term, when it comes to not being able to physically read and comprehend a book, is “print disabled.”

Owens’ jurisdiction covers San Luis Obispo, Santa Barbara, Ventura, and Kern Counties. While there are program participants scattered here and there between the unit’s wide geographical boundaries—Cuesta and Allan Hancock colleges participate, as do the Lucia del Mar and recently joined Santa Maria-Bonita school districts—Owens would like to build up the program even more in the area. The group’s presence is practically nonexistent in Paso Robles and North County, he said. He wants more schools to join, more students to have access to the audio library.

To accomplish that goal, he’s looking for volunteers to join advisory committees that can get the word out about the group and help fundraise. A longer-term vision includes creating satellite studios in Santa Maria and San Luis Obispo so the more vocal volunteers don’t have to trek south to record math and science textbooks.

Volunteers interested in helping Recording for the Blind and Dyslexic should call the Central California unit’s main line at 681-0531 or visit rfbd.org/sb for more information.

The clinic consists of a workshop, followed by pruning demonstrations in Cal Poly’s orchards. Free parking will also be available next to the demonstration area.

“This is a great opportunity for the general public to come out and learn how to prune the fruit in their backyard trees,” said Joe Sabol, a retired agriculture education professor at Cal Poly. “We have a great guest speaker lined up, and there’s no experience necessary.”

The Crops Unit is located at the corner of Highland Drive and Mt. Bishop Road on the Cal Poly campus. Bring your clippers. For more information, call Joe Sabol at 544-1056 …

Shell Beach residents and The Steaming Bean Coffee Company and Espresso Bar will sponsor a meet and greet with the new Pismo Beach Police Chief Jeff Norton on Saturday, January 16.

Dr. and Mrs. Don Morris of Shell Beach and Steaming Bean shop owner David Diaz will host the event, which will begin at 10 a.m. Coffee and muffins will be served; for more information call 773-1672 …

The Cal Poly Organic Farm is now accepting new members for the winter season of its community supported agriculture program, which will run through mid-March.

Both large and small shares are available at $26.50 and $20 per week, respectively, and can be picked up on Mondays or Thursdays or at county drop sites. Large shares in the organic farm contain enough produce to feed three to six people per week; small shares feed one or two people. Space is limited and the program has filled up in past seasons.

More information and membership forms are available by calling 805-756-6504 or by visiting calpolyorgfarm.com.