Thinking inside the box! 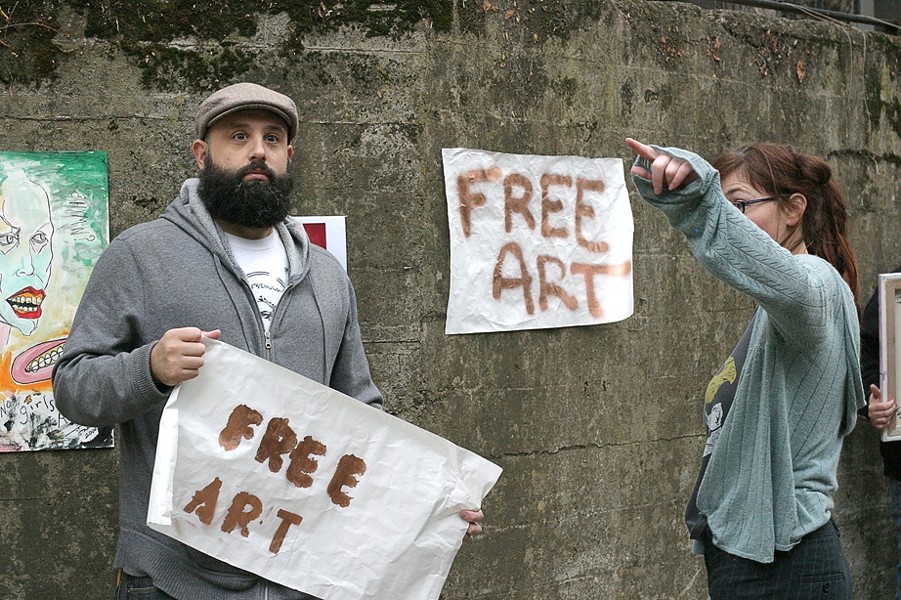 “No, I will not be fat Elvis and marry people at your Las Vegas wedding chapel-themed Meathead Movers truck,” says I to New Times Managing Editor Ashley Schwellenbach, who is once again trying to rope me into one of her cockamamie schemes, this time involving themed moving trucks parked at a “secret location,” which I will now reveal without fanfare:

On Friday, Feb. 25, from 7 to 11 p.m., come to the 3400 block of Miguelito Court and look for a few Meathead Movers vans scattered about, then don’t be shy … pop your head into a truck and let the fun begin.

“This is not the sort of event that will be served to you on a platter,” says Schwellenbach, who organized the three-part event as part of our annual Spring Arts issue. “This is the sort of event that demands interaction, like a wrapped parcel that must be opened to be fully appreciated. In fact, if you want to make it to the happening at all, you’re going to have to be willing to do some investigation. Not too much, mind you. Just enough. We’ll reveal clues via Facebook, New Times, and around town in the weeks leading up to the event. Worth your while? Absolutely. But are you willing to take responsibility for your experience? Are you willing to step outside, and into the box?”

Ha-ha! I already revealed where it was happening! I win!

“For the past month, we’ve been releasing GPS coordinates in lieu of an address, with the theory that if we force people to take greater responsibility for their experience, its significance becomes greater. That may be impractical. But it seems like there is a demographic of people who are bored with the county’s cultural scene. That’s not anybody’s fault.” said Schwellenbach. “But it felt like a good time to try something new. And Meathead Movers could not have been more accommodating of our request to collaborate. Without their contributions, the event really wouldn’t work. I’d have had to go out and find five Radio Flyer wagons and load them up with artists and props, and that probably would not have had the same impact at all.”

I think the person most “bored with the county’s cultural scene” is Schwellenbach herself, which is why she keeps ginning up with these bizarre ideas in the hopes of entertaining herself. She’s got a painfully short attention span, evidenced by the fact that she’s disappeared mid-interview. I’m not even sure what she’s got going on in her trucks this Friday, but she sent me a photo of a microphone (discothèque dance party, schmaybe?), a fabric dancer (fabric dancing, anyone?), and San Luis Art & Supply owner Neal Breton (a make-your-own-art truck?), and at the meeting this morning she was asking if someone had a portable basketball hoop for the unicyclists, which is not a request you hear every day. Just sayin’!

“The idea for the event was shamelessly stolen from a similar happening in San Francisco and Brooklyn. Theirs was bigger—obviously. And it was hugely popular,” added Schwellenbach before she wandered off in a daze. “The big question we’re all asking ourselves at this point is whether San Luis Obispo is willing to play a little bit.”