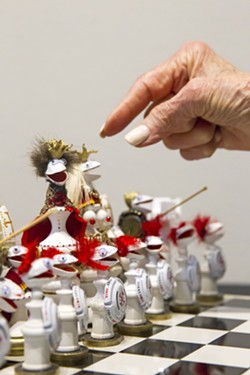 Glass pieces of every color of the rainbow spill out onto a desk in the corner. Nearly every free surface of wall is covered with acrylic or watercolor paintings, featuring something whimsical like pumpkins and evil stepsisters. A series of tiny, handmade books piles out of a basket on the other side of Hellie Blythe's art studio on the grounds of her sprawling Paso Robles home. There's hardly a medium with which Blythe hasn't worked.

It's a short walk over to her living room. There sits a Viking-inspired piece made out of an odd choice of art supply: pistachio shells. But, really, can't anything be considered an art medium? What is art after all but something created by an artist?

If your bar for art is set to paintings of scenic ocean views and landscapes (which, yes, are lovely), prepare for Blythe to blow your mind. Those pistachio shells turn into the main characters of the tableaus she pieces together.

She's not the only SLO County artist looking way outside the standard box of professional art materials, either. There are definitely others. Joe Rowles adorns cellphone cases and bongs with his grotesque art in Grover Beach. Morro Bay artist Philip Carey utilized every scrap of trash from a cross-country road trip. And M'Lou Mayo carves away on avocado pits and turns newts into stamps in her San Luis Obispo home studio.

A shell of a person

Blythe was happily chomping through a bag of pistachios one day when inspiration for her next project struck, just like that.

"I was eating away and a lot of them were empty," the 85-year-old-Blythe said. "They looked like crows."

Blythe, who works with watercolor, acrylics, glass, and paper and ink, started taking pistachio shells, hot gluing googly eyes on them, and afixing them to something like a laundry pin (to give them a body) three years ago. From there, Blythe takes her pistachio people and creates a whole world for them in old cigar or candy boxes, doing scenes from Shakespeare's Romeo and Juliet, to a man landing on the moon, to monks creating champagne. Another piece features a full chess set of pistachio creatures, with the pawns sporting bottle-cap shields. A depiction of Adam and Eve uses local moss to demurely cover their little private bits. Sometimes she draws or paints the background for these pistachio tableaus. Other times, she cuts out the perfect picture to paste on. Her work is currently on display at Studios on the Park as part of the resident artist's collection.

"They're fun," said Blythe, who wears blue eyeliner and a bottlecap necklace adorned with glitter and pictures of creatures. "It's just silly nonsense. In fact everything I paint is silly nonsense."

Blythe sold her first pistachio piece to a local pistachio farmer, funnily enough, though her own supply of pistachio shells typically comes from OSH via her son-in-law. However, they're not the nut she holds most dear when it comes time for a snack. That honor goes to roasted almonds.

"They just taste better, and they're easier to eat," Blythe said.

On the subject of inspiration, Blythe is a little less specific.

You'll want to look away, but try to fight that urge.

"It's stuff that people tend to look away from," Rowles said. "But there's a lot of people who do the opposite, to maybe go against that gut feeling and look closer. I try to capture that feeling."

Rowles, who now runs his own online store, moldycreations.com, got started making his "grotesque art," as he calls it, about two years ago after his son was born and he found himself at home more. Growing up, Rowles was always into drawing but felt limited by the two-dimensional form. He experimented with wood carving and made his way from there to working with polymer clay. After Rowles sculpts a piece, it goes in the oven for 40 to 45 min at 275 degrees and is painted with acrylic afterward. Rowles slowly started putting his work out there, and business picked up. 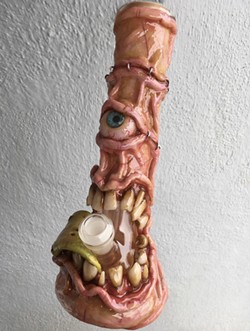 "This part-time hobby was making me more money than my full-time job," he said.

Rowles now works exclusively on making products for Moldy Creations. To date, he's been commissioned by singer/actress Miley Cyrus to make a cellphone case. She wanted it to look just like the mouth of lead singer of the Flaming Lips Wayne Coyne as a birthday gift to the rocker. One of his bongs was also featured on a season two episode of the Netflix stoner show Disjointed. He's currently looking into partnering with different companies to produce grotesque sunglasses and even purses on a larger scale.

"I love art and art is always cool to look at, but I've always loved stuff you can interact with better," he said.

It's normal to fill up a bag with random scraps of trash on a road trip. However, it's a little less normal to keep all of that trash and turn it into a stunning, colorful piece of three-dimensional art. But that's exactly what Morro Bay artist Philip Carey did in 2016 on a road trip to Michigan and back. 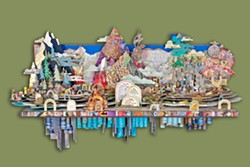 The finished result, One day I put my artwork in the trailer and drove 2,573 miles to a gallery in Michigan, set up the show, and then went home, uses local maps along with things like juice boxes, straws, candy wrappers, plastic hotel room keys, and toilet papers rolls to depict the trees, mountains, and skyscraper buildings Carey saw on his journey. The result is akin to something like a giant page from a pop-up storybook. The piece was recently on display at the San Luis Obispo Museum of Art's Dimensions exhibit.

The details and the big picture interest Carey, who has worked in both graphic and exhibit design over the years.

"Almost everything on there is recycled," Carey said of his piece.

"Packaging interests me from being a graphic designer and somebody who spent a lot of time designing for this little bar of soap that eventually gets thrown away and the box gets thrown away."

Carey is no stranger to reusing materials to make art. When he served in the Vietnam War, he would sketch little pieces to mail home to friends and family. He's also been known to illustrate his dreams on Post-it notes, and he once drew on 450 envelopes over a period of six years to explain to a friend what dialysis was like. And after an intern of his went on a trip to Italy, she brought him back a bundle of his favorite Perugina chocolate bars. He savoured them and promptly held on to each and every wrapper for more than 30 years, until he was ready to turn them into an art piece about where chocolate comes from. His next project will be an abstract piece, using the leftover scraps from his Michigan road trip.

"To take things that would be thrown away and make something out of it interests me," Carey said. "My main thing is you can start with almost anything and turn it into a piece of artwork. It shows you there's a wide variety of things you can make art from."

M'Lou Mayo admits she's something of a thief. While vacationing in Mexico she saw an art piece that featured avocado pits with faces carved on. It wasn't for sale, but she had to have it.

"I stole the idea totally," Mayo said as she stands in front of her own avocado pit pieces like Avotribe and Avogado Felicidad at her home in San Luis Obispo. "I saw it and fell in love." 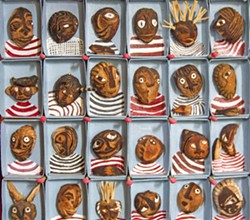 While her work isn't currently on display, Mayo's pits have been exhibited at the SLO Museum of Art in years past. Her carved faces range from friendly to fierce and have a wonderfully earthy, raw, and tribal vibe to them. She's even combined them with metal to fashion Christmas ornaments for friends and family.

"It's fun to get these expressions on their faces," Mayo said.

While Mayo likes eating avocados as much as the next person, they're not cheap, so she's kept her pit supply high with help from friends and a local Mexican restaurant.

"I like them, they're good," she said. "I can't say that I buy them because I'm going to take the pit out. I always save the pit, though."

When a pit first comes out of the avocado, Mayo said it's too soft to work with, but after a few days it's just right for carving. But after a while they can get too dry, so Mayo is currently experimenting with freezing the pits to see if that helps retain an ideal level of moisture.

Mayo also works with metal, pencil drawings, and even newts. While walking around the outside of her home, she would come across a lot of dead newts, so she decided to give the critters a second life as a stamp and third life as a colorful art print.

"Art isn't what you expect it to be," she said. "It can be anything. It might open their eyes to what you can use. It depends on what grabs you." Δ