Photo Courtesy Of Linda McDonald FULL HOUSE Attendees of the 2019 Cambria Film Festival enjoy a session with Michael Whalley (left), lead actor, and Tony Prescott, director, of The Pretend One, a film that won the Founders Award at last year's festival.

The Cambria Film Festival will take place Feb. 6 through 9 with more than 80 screenings at three different theaters. For tickets, the full schedule, and more info, visit cambriafilmfestival.com.

How do you host an international film festival in a small town that doesn't have a movie theater? You get creative.

"Nancy [Green] had been running the local theater group—the Cambria Center for the Arts—so she had a theater that could be repurposed into a movie theater," said Dennis Frahmann, head of the annual Cambria Film Festival, about its late founder.

Green's vision, Frahmann said, "was to find a way to celebrate what she thought of as the town's central characteristic, which is a great romantic spot for people to visit and get away from things." Thus, the festival's recurring theme emerged: romantic comedies that deal with the complexities of love.

Now in its third year, the festival, which takes place from Feb. 6 to Feb. 9, has grown from 600 submissions to more than 3,000, and the all-access passes sold out in just 10 days (tickets for individual screenings and some day passes were still available as of press time). Frahmann said that parsing through the thousands of entries—which came from 20 different countries—was no small undertaking.

With the help of Alan Fraser, an independent filmmaker and the festival's co-founder, Frahmann narrowed the initial 3,000 down to around 1,100 that most accurately fit the festival's theme. Then, the remaining films were each assigned to multiple volunteer screeners: If at least two screeners gave a film the thumbs up, it was then passed on to a panel of three judges—each with film industry backgrounds. The judges were able to narrow the entries down to 12 feature films and just more than 70 shorts that will be screened over the four-day festival.

With around 25 filmmakers expected to attend the festival, the small town festival has managed to garner the attention of a few big Hollywood names. James Denton, an American actor best known for playing Mike Delfino on ABC's Desperate Housewives, is expected to be in attendance. Denton stars in Wake, one of the feature films chosen for screening at the festival. 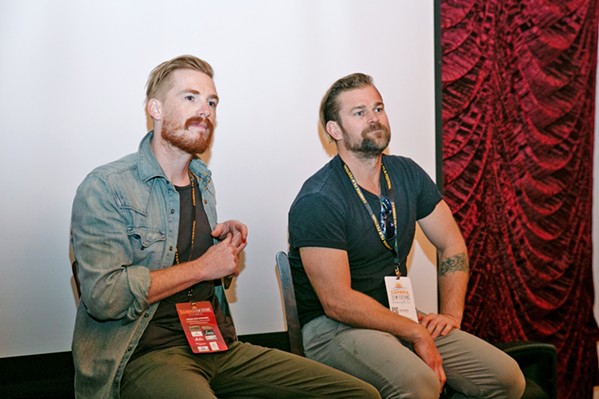 Other guest appearances include a singer-songwriter duo known as Jim and Sam. The couple stars in After So Many Days, a documentary feature screening at the festival. The singers behind Jim and Sam—Jim Hanft and Samantha Yonack—will perform a short concert after their screening.

"They were basically a young musical duo that were trying to break through in the music industry," Frahmann said of Hanft and Yonack. "About two years ago they decided to take on the challenge of doing one concert a day around the world and filming it as they went along."

While some of Jim and Sam's concerts were in venues as small as a laundromat—"because they found somebody who would listen to them and they needed one more concert"—others were opening acts for major concerts in stadium settings, Frahmann said. By the end of the journey, the couple had both scored a record deal and gathered enough footage to produce a film.

These films are just a couple among the many competing for the festival's top honors: Best Short, Best Feature Film, and the Nancy Green Founders Award, which goes to the film that best represents the festival's theme. In addition, attendees will be asked to grade each film after seeing it, allowing the festival to give audience awards in real time for Favorite Feature and Favorite Short. All awards will be given out at a ceremony on Sunday evening, Feb. 9, the last night of the festival.

Along with the festival's ticketed screenings, there will also be a number of screenings that are free to the public. Frahmann said that at these "community films," the audience will be encouraged to give a donation, which will go directly to supporting local causes. Δ