Cal Poly's Kappa Sigma fraternity chapter was placed on suspension and probation for hazing its pledges with push-ups.

Cynthia Lambert, the university's communications specialist, said the university found the fraternity engaged in hazing activities, and in separate incidents, the chapter held events during its pledging process where minors had access to alcohol.

The hazing that occurred, Lambert said, did not involve alcohol but did violate the university's policy forbidding hazing activities. 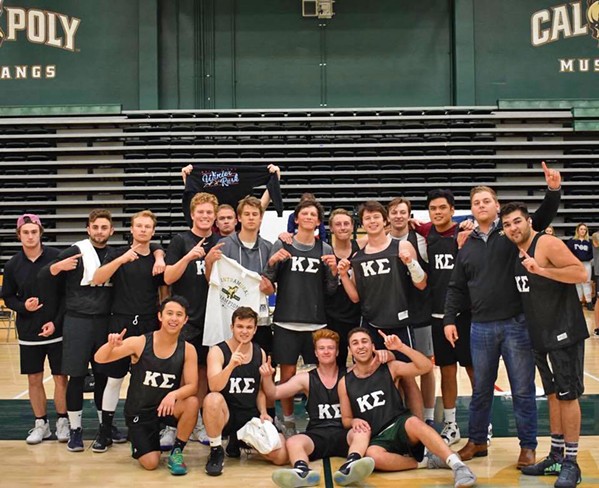 "The hazing in this case involved quizzing pledges on fraternity history and requiring push-ups as punishment for incorrect answers," she said.

The fraternity is suspended through the spring 2019 quarter and placed on probation through spring 2020 after a university investigation determined that the chapter had engaged in hazing its pledge members.

In addition to the suspension and probation terms, Lambert said the chapter is required to abide by any sanctions issued by its national headquarters. The chapter's leadership is also required to complete educational training on risk management.

New Times reached out to Kappa Sigma, but the fraternity declined to comment.

The Tau Kappa Epsilon and Zeta Beta Tau fraternities are on probation through fall quarter 2019 for providing alcohol to minors at parties.

Last year, the university placed all 27 of its Interfraternity and Panhellenic Council organizations, on interim suspension amid a series of racist and offensive Greek incidents.

The interim suspension was administered with the intention of giving Greek organizations the opportunity to examine themselves and develop specific educational plans explaining how they will make diversity and inclusion a fundamental part of Greek life, according to university officials.

On Sept. 6, 2018, the university announced that it had lifted the interim suspension—with the exception of Lamdba Chi Alpha, which will be on probation until spring 2019.