Amid an FBI investigation into recent deaths at the SLO County Jail, the SLO County Sheriff's Office announced that another inmate died in custody Nov. 27.

Sheriff's officials said that the inmate, 62-year-old Russell Alan Hammer, died of massive pulmonary embolism likely caused by deep vein thrombosis, according to preliminary autopsy results. Hammer's death marks the third inmate death at the jail this year, and the 12th death since 2012. 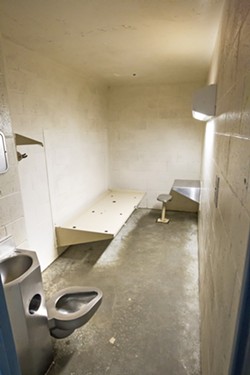 According to a press release from the Sheriff's Office, the incident began after Hammer told a correctional deputy that he wasn't feeling well. Medical staff arrived and spoke with Hammer, who was alert and conscious at the time, before placing him in a wheelchair and taking him to the jail's medical clinic and calling for an ambulance.

"He told the staff he was not feeling well, and jail staff immediately sought medical treatment for him," Sheriff's spokesman Tony Cipolla wrote in an email response to questions from New Times.

Hammer lost consciousness as he was being wheeled to the clinic. Despite correctional deputies, medical staff, and later paramedics attempting life-saving measures, Hammer died shortly after 3:05 p.m.

According to court records, Hammer was in custody on charges of domestic violence and assault with a deadly weapon after Morro Bay police arrested him Nov. 6 for allegedly attacking his wife with butcher knife. Those same court records showed that, at the time of his death, Hammer was undergoing a court-ordered mental health evaluation.

Hammer's death comes as the SLO County Sheriff's Department and the SLO County Health Agency face public criticism and scrutiny over a recent spate of deaths at the jail this year. Those include the high-profile death of mentally ill inmate Andrew Holland, who died of a blood clot after being placed in a restraint chair for 46 hours in January. Holland's death, which resulted in the county paying out a $5 million settlement to his surviving family, was followed by the death of another inmate, Kevin Lee McLaughlin, who died of a heart attack in April.

In the wake of Holland's and McLaughlin's deaths, the FBI began a civil rights investigation of the jail. A spokeswoman for the FBI's Los Angeles field office said the investigation remains active and ongoing. In the meantime, both the Sheriff's Office and the county Health Agency rolled out a series of procedural changes that they claimed would improve medical and mental health care for inmates at the jail.

Just hours before Hammer's death, SLO County announced that Health Agency Director Jeff Hamm would resign from his position in April. According to a press release from the county, there will be a nationwide search for someone who could "continue addressing our community's challenging health system problems and concerns, including the mental health treatment of county jail inmates, the growing statewide mental health crisis and its effects on our community, and upcoming changes to the county's animal shelter and services."

"Our community is facing a growing number of health care system challenges, and I agree with the board that the Health Agency needs a fresh perspective to address them," Hamm said in a written statement.

Sheriff's officials said that the official cause of Hammer's death is still under investigation pending the results of the autopsy and toxicology reports. They do not suspect that foul play, alcohol, or drugs were a factor in his death. Δ