Cambria's playhouse serves up more than t-shirts and moonstones 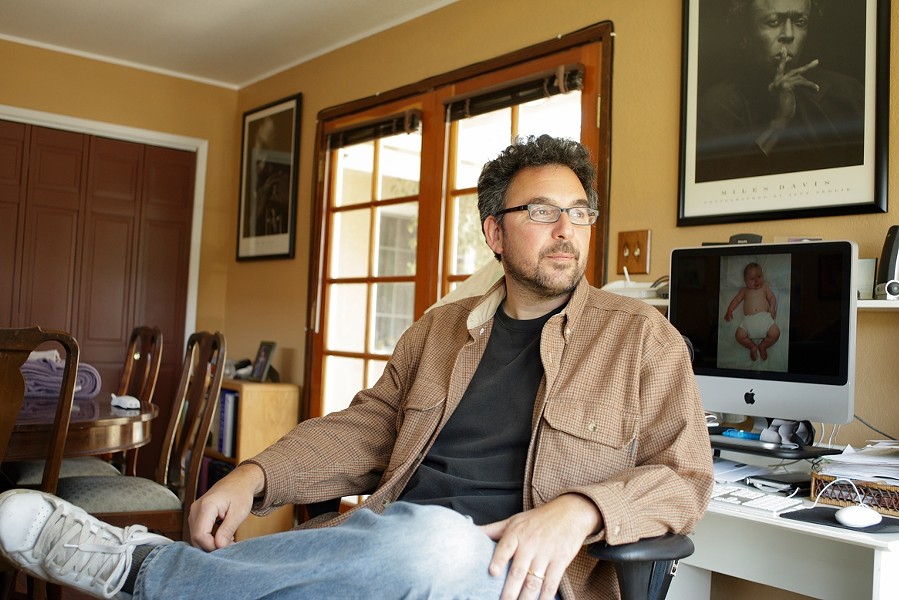 Nearly a year and a half after the Pewter Plough Playhouse announced that Love Town had won its first playwright competition, the Cambria-based theater is finally staging the comedy. After two previous failed attempts to mount the production—sabotaged by the out-of-the- way theater’s customary casting difficulties—it looked as though the production might not happen. In fact, the play’s author, San Luis Obispo resident Michael Kaplan, had begun to think that he might have to shop the script elsewhere for it to see the light of day, until he received a phone call from an actor asking how Kaplan had intended a particular word be pronounced. That was Kaplan’s first indication that Love Town was at last underway. It was also his final communication with the production crew, including the 10-odd cast members and director Karen Moncharsh, who also plays the role of a character named Mindy in the play.

Love Town was among 14 plays  submitted for the playhouse’s competition, and Kaplan’s first crack at writing a three-act play. He wrote during the summer, waking up early and scribbling industriously during family vacations. Among his most vivid recollections of the writing process is editing the play’s first act while his kids rollicked about the Mustang water slides. His story was based on the five and a half years that he lived in Cambria, which he translated into a seaside tourist town called Sea Spray in the play.

“My primary observation while I was there was that we had moved to this town that was so romantic, yet in the first year I saw so many marriages break up. In the town that markets love it’s very hard to keep romantic relationships going,” he observed. And to get his story moving, he created what a judge’s adjudication sheet refers to as “characters rife with bitterness and other undesirable qualities.” Enter Karl, the ape leader of cynics, king of the disillusioned, brimming with what the town busybodies consider to be the aforementioned undesirable qualities.

Kaplan did not expect his play to win the competition, mostly because about one-third of his characters get stoned over the course of the play; roughly half engage in extra-marital revelry; nearly all resort to “adult language” as they are, after all, adults; and one poor, lovelorn sod discharges a firearm, a futile rebellion against his social impotence. The playwright’s intention was not to alienate the audience or critique the town, but to unmask the truth that lies beyond artificial social niceties, revealing an authenticity behind the brightly painted facade that tourist towns display to the world. A “humorous observation,” as Kaplan diplomatically calls it.

“I certainly thought I would be disqualified for those reasons,” Kaplan admitted. “I figured the pot use and the bad language and all of the adultery might not be to their liking. And they’re still grappling with it. They’ve asked me a few times to tone down the ‘naughty bits’ as Jim [Buckley, owner of the playhouse] calls them.”

But in a play that celebrates life’s little “naughty bits” it would be a shame to eradicate them all together. Fortunately for the playhouse’s limited stage space, Love Town is set entirely in a souvenir shop, which Karl (played by Cambria newcomer Gregg Wolff) reluctantly possesses, with references to a nefarious alleyway behind the shop where most of the drug-related naughty bits take place. Buckley points out that such stores are the bread and butter of a small-town tourist economy, a fact that will allow a heterogenous cross-section of townspeople to harass the harangued shop keep.

Lyle (Craig Brooke) and Mindy from the shop across the way coordinate—with unequal degrees of enthusiasm—moonlight serenades and sunset proposals. As a purveyor of romance, Mindy feels that it is her duty to turn up her nose at Karl’s attitude and merchandise, such as a T-shirt that complains “My wife had an affair and all I got was this lousy T-shirt,” instead encouraging him to peddle the town’s trademark and somewhat ubiquitous moonstones. But Lyle is tall and stoned, the perfect vehicle for a story about sex, and fish, and moonlight. And, of course, there’s Karl’s snotty landlord Gail (Sharyn Young) who is disdainful of both his scones and his “Paso Robles sage,” which is really pot. Her husband Lester (Donn Clarius) unexpectedly fantasizes about a ménage a trois. Russell (Daniel Harris), the town sign painter, suffers an emotional crisis while painting a rainbow on a teacup, and joins the ranks of Karl’s Love Town refugees, men whose marital bliss fails to achieve the soaring heights they perhaps once hoped that it might.

Everyone runs around in such a disorderly fashion that it’s difficult to know what to expect. And Moncharsh, who admits that she is “dusting off [her] director’s hat” after an eight-year absence from the stage, is the beleaguered soul tasked with shaping the promising nugget of chaos. Excluding the fact that there should have been some communication between the director and playwright—Kaplan elected not to act in or direct Love Town but that doesn’t

alter the fact that, having written the play, he could have served as a valuable resource for the production—Moncharsh’s plate may be overflowing with the combination of acting and directing in the same play, a first for her. At rehearsal, at least one in particular, she seems overwhelmed. There comes a point in every theatrical production when the not-too-subtle sheen of desperation lingers over the stage as the calendar marches forward, toward opening night. But it’s impossible not to wonder how different productions at the Pewter Plough Playhouse would look were the little theater glutted with talent of all ages, aspects, and demeanors, near at hand.

Love Town promises an aberrant evening of theater, provided the firearm, narcotics, adultery, and profanity dodge the chopping block. It would be heartening to find that theatergoers are capable of embracing aberration for this theatrical debut. But, for now at least, Love Town is a question mark.

“It feels a little like an arranged marriage,” said Kaplan, nervously. “I just don’t know what to expect for opening night.”