This candy's not for kids

A local brewer blends candy with beer for the win 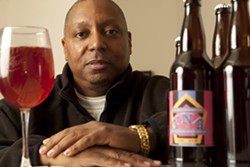 Many people spend their childhood in a desperate search for that next piece of sweet, sweet candy, only to spend most of their 20s in search of cheap, cheap beer specials.

Now there’s a way to satisfy both cravings, and it’s nostalgically delicious.

Brewed and bottled in the kitchen of an Atascadero apartment, TNA Candy Beers are made in small, 5-gallon batches, but they’re poised to make a big impact.

“I’m the only one in the United States that’s doing this. Period,” said brewer Tyrone Armstrong. “It’s a totally non-traditional style of beer—a completely different process with very unique ingredients.”

Armstrong started home brewing stouts and India Pale Ales six years ago, but traditional brewing quickly grew stale. He said the idea to infuse beer with candy came to him in a dream. Now he uses an assortment of candies, exotic fruits, teas, and even Gatorade to make his brews. He said it usually takes about a month to make a batch of beer, but his method cuts the process down to 10 days.

“I like the creativity of it,” Armstrong said. “You can take the malt and hops and yeast and make regular beer, or you can make adjustments and experiment until you create something new.”

The result is not like most flavored beers, with their overpowering bursts of fruity flavor followed by that bitter aftertaste. Armstrong’s beers have a consistent, semi-sweet taste that’s hard to pin down. There are multiple flavors—Sweet and Sour Lambic, Hard Candy, Black Blizard—but none are easily identifiable. With hints of apricot and citrus, the drinks seem more like soda than flavored beer.

Armstrong and his business partner, Judy Shapazian, have been working to showcase the beers at local venues like the Cambria Car Show and Chili Cook Off, the Vinoteca wine bar in Paso Robles, and the California Wine Festival of Santa Barbara.

Emily Kaufman, vice president of operations for the wine festival, said TNA Candy Beers was a standout among the breweries.

For now, Armstrong can only give away small samples of the beer at tastings or share bottles with friends and family.

“Everybody wants the beer,” he said. “It’s a big hit, but we can’t sell it in stores because we’re not licensed.”

He needs $30,000 in seed money to get the wholesale licensing and production equipment needed to turn his passion into a successful business. He’s hosting a barbecue on Nov. 14 that will feature beer tasting and a presentation of his business model to drum up investors. It’ll run from 1 to 5 p.m. at 663 Rancho Dr. in San Luis Obispo.

Armstrong said that half of TNA’s profits will be recycled into the business. A quarter will go to investors, and the rest will be used to start a shelter for homeless teens.

“My passions are helping teens and brewing beer,” said Armstrong, who’s been a teen mentor for 27 years and is currently director of the YMCA teen center in Cambria.

On the surface, those passions might seem contradictory, but Armstrong dismissed any concerns with a laugh.

“I’m not enticing kids to drink the beer. I’m just using it as a vehicle to raise money for the charity,” he said. “Look at any charity event. They all serve wine and beer. This is no different.”

On Mondays, Pismo Bob’s True Value Hardware will donate 15 percent of its profits to the struggling music program of the Lucia Mar School District. The hardware store is located at 930 Price St. in Pismo Beach. Call 773-6245 for details. …

The Atascadero Native Tree Association is giving free oak tree seedlings to Atascadero residents. A 2007 tree inventory found that valley oaks and blue oaks aren’t adequately regenerating in the city, so leaders are encouraging residents to plant them and prevent the slow loss of woodlands. The trees are available at City Hall Monday through Friday from 8:30 a.m. to 5 p.m. For more information, call 461-5035. … ∆