This is America: Memorial Day is about freedom and remembrance 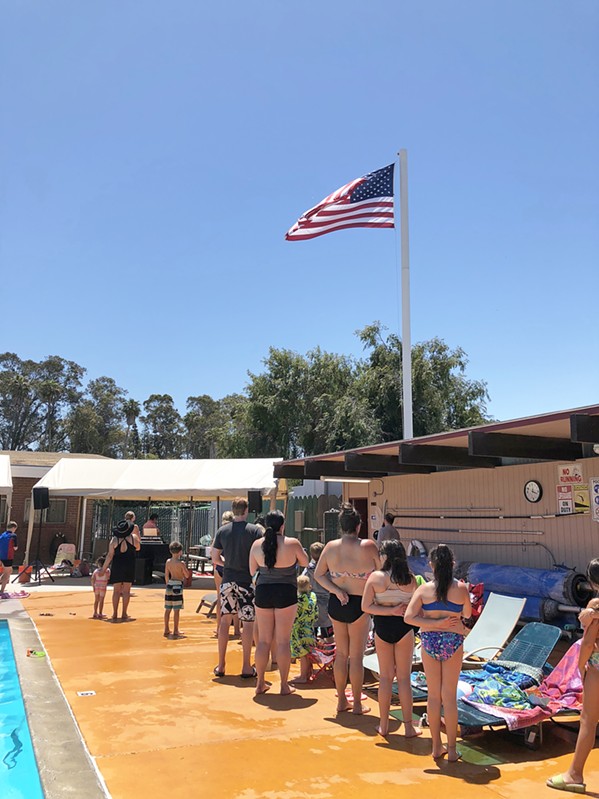 It's Memorial Day, Monday, May 28, and my wife and I are posted up around the pool of the San Luis Obispo Elks Lodge, which is surrounded on two sides by a cemetery. As we drove in, we made note of the American flags dotting the graves of armed services members and their friends and family who gathered to remember and decorate their headstones. Towering over the Elks pool is a flagpole with a huge American flag just starting to flutter in the late morning breezes. Patriotism is in the air.

Like many Americans, we're commemorating the sacrifice of fallen soldiers with a day off work, barbecued burgers, and inexpensive American beer, but there's no forgetting what the holiday means. The Elks, or in its longer form The Benevolent and Protective Order of Elks of the United States of America, is an organization dedicated to veterans and children, and today's poolside DJ, Richard, a former exalted ruler of the local lodge, asks everyone to exit the pool, stand, and after speaking from his heart about the meaning of Memorial Day, asks all to remove their hats, place their right hands over their hearts, and face the flag as he plays a rousing rendition of "The Star Spangled Banner" as performed by Beyoncé at the Super Bowl. Afterward, the crowd bursts into cheers and applause. This is America.

Eventually it's time for some contests, and five teams of adults gather to compete in the frozen T-shirts and shorts competition. Each team gets plastic bags with soaked-and-frozen-solid shirts and shorts, and the first team with a member wearing the outfit wins. They're only allowed a blue plastic solo cup, from which they must ferry water cup by cup from the pool house bathrooms to thaw their clothes. Lots of water and ice chips fly as the teams try to beat their T-shirts into submission. The crowd of mostly kids gathered around loves it! Later there's a belly flop contest, first for adults and then for the kids. The crowd cheers for the finalists, and some serious skin slapping water has them howling with laughter. This is good old-fashioned family fun.

Kids are swarming all over the pool, some tossing around a football in the field behind the pool, others on the swing set. The volunteer crew at the poolside grill is whipping up burgers, cheeseburgers, garden burgers, hot dogs, and grilled cheese sandwiches. The sun is shining. It's perfect. My mom and sister are here as well as lots of friends. We're happy and lucky and prosperous.

It's hard to believe there are fellow Americans at war right now, in far-flung places overseas, risking their lives, maimed, dying, one day lying under the headstones that family members will next year decorate with small American flags and flowers while other Americans eat burgers in the sunshine around a pool, safe and free. This, too, is America. Δ