This is only a test

Are the stakes too high for a flawed system?

The argument for standardized testing goes something like this: Standardized tests are an accurate reflection of a student's knowledge; a quantifiable, computer-tabulated-with-little-or-no-margin-of-error assessment of where that student is excelling or lagging in each subject. Standardized tests tell us what our kids know and don't know, and by extension where their teachers, principals, and districts are both succeeding and failing. Naysayers to the testing format say it reflects not what a student has grasped conceptually about a subject, but how well they take tests. These critics, most often teachers, point out that each student processes learning differently - some are better able to express verbally or in essay form their depth of knowledge on a subject.

From grades 2 through 11, students will spend approximately 16 hours per year of class time with a No. 2 pencil taking the Standardized Testing and Reporting exam, or STAR exam - the current test used to rate California students and schools. Some charge that much of this ever-more-important assessment process relies on a flawed method of measurement --- filling in those little bubbles on a multiple choice Scantron.

#"Think of the driving test," said San Luis Obispo High School's English department chair, Ivan Simon. "If you just looked at how well someone answered the written part of the driver's test, then you'd assume the skill of the driver was represented by only that score. But that person wouldn't necessarily be a good driver."

Simon has been teaching for 22 years, and in that time has experimented with many classroom methods of both teaching and testing, including standardized tests, to varying degrees of success. He believes there's more to assessing a student's work than answering A, B, C, or all of the above.

"In English, you have discussion, writing, participation, performance - multiple assessments of the subject," said Simon. "Some teachers have students discuss works and write about what they learned. The best teachers I know don't use the standardized test to determine what is great writing."

Each individual's process for retaining information varies. For some students, creating a mnemonic - like "Richard Of York Gave Battle in Vain," for the order in which colors appear in the color spectrum: red, orange, yellow, green, blue, indigo, violet - is the only way to organize and recall facts, while some people do have a photographic memory where information is simply pulled up like slides through a projector. These folks are the ones who become rocket scientists. However, regurgitating this information is a bit more complicated than simply dropping in that subject's slide in the brain's viewing tray.

Morro Bay High School senior Stacey Frempter has a 4.6 GPA (scoring above 4.0 due to the advance placement classes she takes.) Despite her stellar scholastic skills, she says that in many of her classes varied teaching techniques are what open her up to insights she would have missed had the class focus been on just memorizing material.

"Class discussions open up so many ideas," said Frempter. "Kids will say things I would never have thought of, and it's really helpful to hear everyone's take on a book; mainly with English, but even with history. When everyone talks about the subject, there's more insight."

Simon said these other methods of teaching have a testing counterpart known as performance-based assessments, which more accurately reflect a student's grasp of a complicated and layered subject. However, he added that our current test fixation is based on the phenomenon that people love to gauge success or failure with a number, and in the current educational climate where parents and policymakers are demanding simplified measurements for how well a school and its students are performing, standardized tests offer a quick fix.

"People like the idea that you take a test and get back some number; people give it some special value that is far beyond what it should mean," he said. "It meets the competitiveness of our society. These numbers just tell you a very small part of what a student is capable of."

The National Center for Fair and Open Testing (NCFOT) said that the U.S. is one of the few countries to rely so heavily on multiple-choice tests, and that most economically developed nations utilize performance-based assessment to evaluate progress. NCFOT asserts that teaching students to do well on multiple choice tests merely teaches them how to memorize isolated facts, and that U.S. students aren't developing fundamental and higher order learning abilities. Ironically, the group asserts, students in other nations are scoring higher on standardized tests than their U.S. counterparts because they've learned the material on many different levels.

California students have been taking one form of standardized test or another for some time now. The CAT/6, short for the California Achievement Test (the sixth such incarnation), was the last standardized test for the state's pupils until the STAR exam emerged. Taken by students in late spring each year, STAR ostensibly allows schools to check their students' basic knowledge of material the state says students must master in order to move up to the next grade. All the students' scores are combined to create each school's API, or academic performance index. Schools score anywhere from 200 to 1,000 on this test. With the passage of the Federal Accountability Act, or No Child Left Behind, poor-scoring schools that don't show an improvement on their APIs must give their students the option of going elsewhere for an education - a severe financial blow since schools receive funding based on the number of enrolled students. 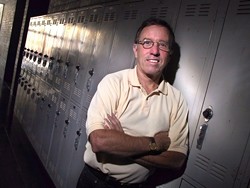 #With this increased pressure for schools to perform well on these tests, some critics assert that in an effort to boost a school's API score, teachers are being asked to "teach to the test."

"Kids are starting the school year preparing for the test, then taking the test at the expense of learning," said Simon, who noted that each year it seems teachers have fewer days to cover course material. "The emphasis is on these standards, and it's often a dumbing down or watering down of what students are doing, and all of this grading is gearing students to write in a very formulaic, rather than an original way."

"We provide teachers with examples of multiple choice questions, but it's not the sole focus of the curriculum," said Jones. "The state releases sample questions, roughly 20 percent of the test, and if teachers want to use those questions they can, and they do, just like they do for advance placement tests. The misperception is that we spend all our time just teaching to the test and somehow the STAR exam is consuming education, but the truth is there are all kinds of assessments and we prepare kids for all of those as well."

Jones said he believes good students will always excel regardless of test format. "If a student is capable of writing a good essay and answering short questions, then they will have success on the test," said Jones.

He added that the emphasis on standardized testing is just one measure of a student's ability and that there are other valid ways currently in use. "Overall it comes down to the fact that multiple choice is the easiest one to score," said Jones. "But it is just one assessment."

Simon agrees that any system used on such a broad scale is as good as it can be for what it is, but added that the test is very narrow in the big sense of what learning is about. He said teachers should ultimately be given the autonomy to develop their own tests and measures, including keeping student portfolios, and again, individual assessment.

So is standardized testing the fast food of American education - processing away nutrients like literature circles and group discussions for the easier, immediate, and cheaper multiple-choice Scantron option? Perhaps it's just the current trend in education.

"I think if you look at the history of education you'll see we've been able to do quite well without computer-related testing," said Simon. "Like a lot of movements in education, it's the popular thing. Ten years ago it was self-esteem, but now it's standardized testing. There's a place for standardized testing, but it shouldn't be driving education."

Alternative schools fall through the cracks

With the passage of the Federal Accountability Act, aka No Child Left Behind, or "Nicklebee" as some administrators like to call it, schools with low API (academic performance index) scores and other indicators of poor performance are labeled "program improvement" schools. When a school receives such a grade their students have the option to attend another, better performing school. As a result the "program improvement" schools could see a drop in attendance, which means a drop in funding.

"Nicklebee requires us to have a passing API score, and that all students must be proficient in math and reading by 2013," said Paul Piette, principal of Grizzly Youth Academy. "Our school is unique in that our students' maximum length of stay is five months, so any scores or testing reflects student learning prior to their attendance at our school. However, we're still responsible for making sure they test to the standards."

And that could end up hurting the kids who depend on alternative schools to get their high school diploma.

"The average student at Grizzly has either dropped out of traditional high school or is at high risk of dropping out," said Piette, noting that 15 percent of their student body is local. "These kids typically have substance abuse issues and come from low economic families and, often, a violent background, either in the home or the neighborhood."