This is the song that never ends

Atsuo remains something of a mythical figure for me.

Our interview happens entirely in writing. My questions are translated into Japanese, his answers into English, producing some innovative sentence structure on both sides of the conversation. I can’t help but think about the linguistic and cultural chasm the entire communiqué has had to leap across, and the little details that might have fallen through. I have trouble imagining my words cropping up in the mind of the wiry, gong-banging, high-energy drummer and vocalist from Boris. 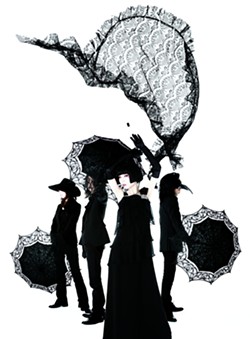 A Tokyo avant-garde metal band—if one may give in for a moment to the classifications the band’s amorphous sound so often bludgeons over the head—Boris was born of the Japanese punk and hardcore scene of the early ’90s. The band borrows its name from a song by The Melvins and frequently interprets the sludgy, grungy sounds of that American band’s Pacific Northwestern roots. But neither Boris’ namesake nor its sonic birthplace could predict the rainbow of genres the band would embrace over the 15 years and 17 albums since its inception.

At one point or another, Boris has been called—accurately, if incompletely—hardcore, punk, psychedelic, noise, grunge, stoner rock, heavy metal, drone, ambient, and even pop.

In a search, perhaps, for Boris’ earliest formative influences, I ask what was playing in the members’ homes as children.

“I was into cartoon stuff and its theme music,” Atsuo answers via the translation chain. “The first record my parents bought me was a cartoon theme music collection, which I have had until now. Jacket is gone, label has scribbling, many scratches are on
it but I will never throw it away.”

While this early influence might not be evident in any of Boris’ present or past musical incarnations, it’s one shared by fellow band members Takeshi (guitar, bass, and vocals) and Wata (guitar and vocals).

“They were into similar music—and that is nothing special here in Japan,” Atsuo writes. “Cartoon animation song seems to be blues music for Japanese.”

The three current members of the band, with then-drummer Nagata, who left early in the group’s evolution, met and formed Boris while in art school together in the early ’90s. A onetime film major, Atsuo insists there’s little difference between filmmaking and writing music, as both entail, he says, “the same process to make things real as much as I can, or to pull up its character from inside of them. … To me, songwriting is very similar to directing a film.”

But Boris doesn’t write songs the way most musicians would, Atsuo adds—and the band hardly “practices” in a normal sense at all. Instead, they improvise in the studio, recording everything they play and listening for interesting anomalies that lead to new compositions.

“To us, recording and arrangement are certain part of our ‘composing,’” Atsuo explains.

Some songs spring to life, near complete, in a single jam session; others are the product of several such improvisational recordings layered over one another.

“It is similar to painting, some with simple drawing and another one with layered paint,” he says. “I can’t define our average time at all to write songs; [we] just see how songs grow. We won’t scrap any songs; simply we keep it until it has a right direction.”

“Statement,” a shrieking, electric, pumped-up single from the band’s 2008 album Smile, was written at the same time as the 2005 album Pink, but the band held on to the song until, Atsuo says, it had found its direction.

This songwriting process, and the band’s penchant for improvisation, mean there are often several versions of a song floating about at a given time, official or not. Likewise, different versions of the same album are released in Japan and the United States.

Performances, too, offer fresh, maybe even spontaneous, arrangements of existing work. Versions are a Boris staple, often in a philosophically provocative way. After all, no two people understand the same song the same way, so why not alter it slightly every time it’s played? It’s like a reminder that we are each, on a most basic level, alone.

This tendency toward perpetual replication, and Atsuo’s thoughts about film and music, are nicely encapsulated in the strange little gem that is the never-ending short film (not an oxymoron in this case) heavy metal me, a sort of extra goody included in a 2005 DVD release of the same name, only capitalized. The scratchy, black-and-white film features guitarist and vocalist Wata, dressed in a white gown, a series of eerie shots, to a background of intermittent white noise. Every time it’s played, it’s a slightly different film, reshuffled, re-edited, with new scenes, perhaps, or hints of guitar music peeking out from under the dull blanket of white sound. I ask what it’s about.

“To reveal the secret makes this video mean nothing,” Atsuo replies. “There is a work that consists of the secret. Very few people around Boris production crew knew it. You can see it in different order and atmosphere every time. [The] video gets different impressions with viewer’s cultural background. The concept is that this video work is completed when viewers see it.”

The mention of the video seems to evoke an unexpected response, as Atsuo goes on, “Your question gives me very mixed emotion. Time passed and artworks and social system are changing. Since Heavy Metal Me in 2005, things are moving and turning [to the] point that we can’t go back.”

I’m not certain if he’s talking about the way Boris’ sound seems perpetually on the move, never lingering too long in one genre, or if he’s referring to the lifestyle changes that have come with the attention bestowed upon the band from the mainstream music press over the past few years, starting, maybe, with the album Akuma no Uta (2003) and building force with Pink (2005) and Smile (2008), culminating with 2011’s Heavy Rocks and Attention Please.

(Heavy Rocks, the second Boris album with that title, was released the same day as Attention Please, though the two could not have been more dissimilar. Still, reviews tended to kill both with a single stone, like this one in Spin: “Heavy Rocks is a monolithic take on everything from trippy Funkadelic acid sludge to galloping Blue Öyster pöp to lightning-riding ’80s thrash; yet it all billows fluffily from the same dreamy doom factory they constructed on 2005’s Pink. Farther into the cosmos is sister record Attention Please, the least ‘metal’ thing the band have released to date, which focuses on icy rhythms and smoky moods … . Guitarist Wata caresses the mic on nine tracks, steering her bandmates from brackish Casio swoon to glitterball trance to euphorically raging rock.”)

In 2009, Boris’ pretty, droning, moody metal, most notably the tragic, nearly 10-minute track “Farewell,” set the mood of Jim Jarmusch’s woefully misunderstood film The Limits of Control. Many critics, while unable to avoid praising the film’s breathtaking cinematography, responded scathingly to the film’s slow, enigmatic nature and inconclusive plot. But the band loved it.

“It is a great film as it should be. Question, criticism, or review reflects the author’s personality. It is like a mirror,” Atsuo says.

What is it like, I ask, to witness one’s personal creation employed as part of someone else’s vision?

“I felt honor when I saw The Limits of Control because our songs grow in another way, which we didn’t expect,” he writes. “Boris songs are like our children; children are not a possession of their parents. It is uncontrollable in a good way.”

These sonic offspring are always growing, too, in the fertile minds of Boris’ expanding audiences. And on Friday, Oct. 7, those audiences will include, oddly, SLO Brew.

Boris doesn’t fit neatly into any category, but it’s certainly not something one is wont to hear at the Brew. They aren’t white-guy reggae. They aren’t catchy or danceable. They’re not hip-hop or a tribute act or gypsy-tinged indie folk rock. They aren’t even typical metal in a purist’s sense—and the same goes for “drone,” “sludge,” “punk,” and “psychedelic.” Boris is a reminder that none of those divisions really exists.

Arts Editor Anna Weltner wrote this story so it’s different every time you read it. Contact her at aweltner@newtimesslo.com.