This land is our land

Many of Jim Andre's oak trees have been downed and some of his prime property has been graded, but he's still fighting the county for his land. Andre owns 50 acres on Lake Nacimiento, a stone's throw from the Monterey County line - which has turned out to be a precarious location. Andre's property represents the keystone to the proposed Oak Shores development, a subdivision that the SLO County Board of Supervisors has supported despite angering some Nacimiento residents with its use of eminent domain.

Andre's lake house is at the end of the serpentine - and private - Nacimiento Shores Road. Back in the 1950s when Andre's father purchased some 500 acres on the lake, Andre and his four brothers and sisters lived in a trailer that was their lake house. No phones, no plumbing. Since then the family built a modest house on the edge of the shore, with plumbing but still no phones. Andre and his siblings all share the house, but over the years they've sold off slices of the original property. Andre and his neighbors share responsibility for the upkeep of the private road.

And it's Nacimiento Shores Road, which Andre's father named, that is now at the heart of an eminent domain land grab by the county, a grab that Andre and his neighbors say is difficult to understand because it raises questions as to the use of eminent domain. In order for eminent domain to be employed, it must serve the public good and give fair and just compensation to the property owner. Andre and his attorney say that the proposed project does neither.

Andre said he wonders why the county is taking his land when there's an alternative, which is County Road 22.

CR 22, he said, is essentially a jeep trail, but it's better suited for emergency purposes because it's a more direct route to the Oak Shores II subdivision and it already exsists as a county road. Andre added that the developer would profit by eminent domain because of the greater expense of bringing CR 22 up to CDF standards.

The board of supervisors approved the project on May 18, 2004, and out of the five county supervisors Peg Pinard was the only one who voted against it. Supervisors Mike Ryan, Katcho Achadjian, Shirley Bianchi, and Harry Ovitt all voted in favor.

Ovitt has yet to return calls for this story, but his legislative assistant, Cliff Smith, told New Times that County Road 22 doesn't actually exist as a viable road and building one there would create significant environmental impacts. "That's not a practical approach," he said. 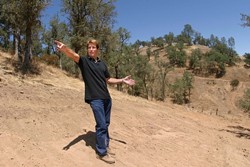 #"Secondary access will also benefit those who are existing residents," said Supervisor Katcho Achadjian. He also pointed out that gates will be installed that will prevent the usage of the road in non-emergency situations.

Supervisor Shirley Bianchi calls the use of eminent domain "gross," even though she voted to use it for this project.

"I don't see why person A has to give up property to benefit person B, just so person B can make money," Bianchi said. At the meeting in May 2004, Bianchi said the issue at hand was "property rights versus lives of others."

"The county tried to cut corners," said Andre's attorney, Randy Fox. "The county made a decision that they were going to approve the Oak Shores subdivision and then, at the last minute, when it was scheduled that County Road 22 was going to be the secondary access, the developer said, 'Hey, it would be cheaper if we went this other way,' and they go to the board of supervisors to approve at the last minute to agree to change the condition of approval and have access along Nacimiento Shores Road."

This, Andre said, prevented any of the Nacimiento Shores residents from publicly commenting on the project. That was in 1996. Fast forward to the May '04 meeting, and more than 20 citizens mobilized to request that the board not pass the proposed Lake Shores II project and the use of eminent domain.

Most everybody seems to agree that residents at Nacimiento Lake should have multiple in/out roads to their homes. The area has a history of high fire danger, and without multiple routes tragedy is a scary reality. But Andre and his neighbors are fearful of serious gridlock if their road becomes the emergency out-road for thousands in the Oak Shores development.

"If you had a fire truck coming one way and an RV the other way, hey - everyone's house is going to burn down," said Andre. "We're getting caught in this squeeze where the county now appears to have set this up in such a way where once they finish this part behind my house they're going to call it a done road. There are no plans in existence, engineering or otherwise, to improve the roads to CDF standards. So we're very disturbed."

But according to CDF officials the development project was contingent on widening Nacimiento Shores Road to the CDF standard, which is 18 feet.

Fox points out that the county took an 18-foot easement along Nacimiento Shores Road. But, he says, normally a 40-foot easement is required to create an 18-foot-wide road.

So Fox says either the county isn't going to be able to build a proper road, or they're going to have to take more land to do it.

"The fire trucks are coming in and the oak shores residents are going to be driving out and they're going to meet head-to-head and there's not going to be any way to get past each other," said Andre. "I don't think the county's really thought it through."

In order to complete the road that leads from Andre's Nacimiento Shores road to the Oak Shores II development in Monterey County, SLO County took easements from the residents and a parcel of Andre's land that's slightly smaller than an acre.

Two weeks ago, tree crews showed up to Andre's property with heavy machinery and took down nearly 40 trees and graded the hillside, a section that represents the link between Nacimiento Shores Road and the Oak Shores II development. Even though the case is still in litigation, the county was given the go-ahead to proceed with the road building.

#Andre said he cried when saw the hillside for the first time - barren, without the oaks that had stood long before his childhood days at the lake. To add insult to injury, Andre said that the developer will be allowed to replace Andre's trees with trees on the new development. And, from the site, Andre recounted plans to build a retirement home there; a parcel with views of the lake and Hearst Castle.

For that lot and his section of Nacimiento Shores Road, the county offered Andre the fair market price of $4,600. But technically it was not an offer for a parcel of land; it was the purchase of a road easement, even though there was no existing road there.

Tim Smith, SLO County Dept. of Public Works right-of-way specialist, said this is standard practice. But Andre sees it as a not-so-subtle way for the county to obtain expensive land on the cheap and for the benefit of a developer, exploiting a loophole for private development.

"They're taking the easement on the existing road but they're adding a tag-on piece to Monterey County," said Andre. "They called it an easement but they're taking just under an acre of my property to put in this road. And I'm arguing that these are some of the most attractive, buildable sites on my property."

And that, along with Andre's safety concerns, is why he's fighting the county. Some of Andre's neighbors on Nacimiento Shores Road accepted the county's offers for road easements.

But Andre is fighting the use of eminent domain and has secured a change of venue to Santa Barbara County.

"What we're hoping is that we're going to force them into a position that they're going to come back and take a look at County Road 22," said Andre.

"The bigger question in my mind is, have they properly used their eminent domain authority?" said Fox. "Did they take this property for a public purpose? And I think there's some real questions about this."

Whether or not Andre is successful in convincing county officials to reconsider, his situation easily shows the complexities of eminent domain usage in SLO.