Cooking by the seasons

Thomas Hill Organics is located in Paso Robles at 1313 Park St. (226-5888 for more information). Thomas Hill Organic Kitchen is located in San Luis Obispo at 858 Monterey St. (call 457-1616). To view seasonally changing menus for lunch and dinner, wine and beer list, and cocktail offerings, or to make a reservation, go to thomashillorganics.com.

Necessity truly is the mother of invention. A young Kurt Metzger was born with a literal taste for adventure, but dinners at his parents' suburban Pasadena home weren't cutting it.

Sorry Betty Crocker, but this kid needed a stronger buzz. 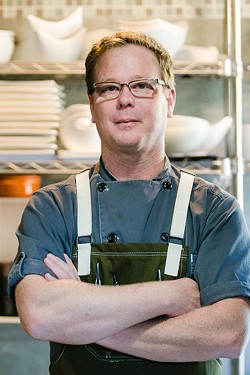 "Mom cooked chicken 365 different ways, and I hated chicken," the newly appointed Thomas Hill Organics Executive Chef said with a laugh. "It all started at home. I was always playing with different flavors."

While some kids may have been sneaking their dad's Marlboros and congregating at the local pool hall or arcade, Metzger was interested in a different kind of action.

He hung out at the neighborhood meat counter, gleaning everything he could from a slew of personal idols: butchers, meat men.

Metzger saw a glimmer of inspiration in their strength, skill, and keen eye.

"I'd watch 'em break down the whole animals and was just amazed. I got really involved with it. Fast forward to 17 years old, and I took off to Texas, where an amazing chef sent me to culinary school," he said.

A lifelong drive to follow this thirst for simple, quality ingredients served with a sense of pride has paid off.

From New York City back to Pasadena and on to San Diego, Metzger has run his own catering company, cooked over a smoky wood fire, and placed the most delicate micro greens atop artful farm-to-table plates.

But, per usual, he still wanted to learn, grow, and explore his passion, some three decades into his craft. That's what really brought him to the Central Coast.

As the chef said of his new Paso Robles home: "I'm smack in the middle of farmers and vineyards. Being able to walk out my kitchen door and be on a farm or at a vineyard within 20 minutes is just amazing."

Walking away from his old life down south wasn't what many would consider a no-brainer. Metzger had previously established himself in San Diego with his acclaimed Kitchen 4140 and The Spotted Cow Catering and Pop-Up Dinner Co.

Now, he's bringing that swagger and sense of craft to a new, equally hungry audience. Get ready. The chef's braised short ribs with smoked, crispy polenta (included in Food Network show The Best Thing I Ever Ate) is now cooking in THO's wood fire oven in Paso Robles.

For THO Owner Debbie Thomas, Metzger's arrival represents a dream-team come true. She's gone through more than a few executive chefs since opening shop in Paso back in 2009, but she said this partnership feels particularly solid.

During a recent lunch on the patio (where I gobbled up the most delectable scallop ceviche with melon and peppers), the pair traded jokes and good vibes. These two are giddy with the possibilities.

"Debbie and I share a love of great food and great wine—the idea that simple and fresh ingredients can be combined to create something unexpected," Metzger said of his new partner. "Given the quality of farmers' markets in the area and my love of working with local fishermen and butchers, I'm excited to see how the menu will change each month."

From just-picked Gracious Greens Microgreens in Grover Beach to ripe tomatillos grown on Loo Loo Farms in Paso Robles, Metzger is always on the hunt for the next great seasonal star. In 2017, that means always keeping his smartphone close.

"I have farmers who text me daily and nightly on what's coming up, what's growing, and what I'd like to have picked right here, right now," Metzger said. "It's not like something that's been sitting in a walk-in for a week. At the end of the night, our walk-ins are essentially bare."

Metzger recalled a recent conversation with a farmer at RobinSong Farm in Templeton. It was a poignant moment that solidified his dedication to serving SLO County and decision to dive head-first into a new, abundant land.

"[The farmer] said, 'Chef, I'm in the middle of the field right now. I have early grey zucchini, do you want 10 pounds?'" Metzger said. "And I could virtually hear him picking them right then and there." Δ

Hayley Thomas Cain is obsessed with THO's end of summer melon scallop ceviche. She can be reached at hthomas@newtimesslo.com.