Taika Waititi (What We Do in the Shadows, Hunt for the Wilderpeople) directs Chris Hemsworth as Thor, the god of thunder, who loses his hammer, is imprisoned on the other end of the universe, and finds himself pitted against his former ally The Hulk (Mark Ruffalo) in a gladiatorial battle. Meanwhile, Hela (Cate Blanchett), the goddess of death, is threatening to destroy Thor's home, Asgard, so he must escape and race against time to protect everything he holds dear. The film also stars Tom Hiddleston as Thor's estranged brother, Loki, Idris Elba as Heimdall, Jeff Goldblum as Grandmaster, Tessa Thompson as Valkyrie, Karl Urban as Skurge, Anthony Hopkins as Odin, and Benedict Cumberbatch as Doctor Strange. (130 min.) 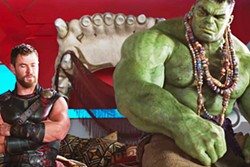 Glen Comic book movies are inherently silly and absurd, and nothing kills one quicker than over earnestness and taking itself too seriously. After the rousing success of the R-rated Deadpool and its self-deprecating humor, it seems like these films' producers have clued in to the idea that comic book films should be fun and funny. The producers of Thor: Ragnarok had the good sense to hire New Zealand director Taika Waititi, who was responsible for the quirky indie gem Eagle vs Shark as well as some episodes of the brilliant TV series Flight of the Conchords. Last year Waititi hit a home run with the poignant, charming, and hilarious Hunt for the Wilderpeople, but as a director, Waititi was still a risk for taking over a big franchise film. Judging from the way he's handled this Thor installment, he'll be back. This film is a riot! Thor may be the god of thunder, but he also has some insecurities, and the heart of the film is about him finding the true source of his power and channeling it. If you've seen the theatrical trailer, you've already got a taste of the film's tone. "I don't hang with The Avengers anymore. It all got too corporate," Thor laments, perfectly encapsulating how eager this film is to make fun of itself and the entire idea of a comic book franchise. When Thor tries to gather a new team to save Asgard from Hela, Valkyrie asks, "This team of yours, it got a name?" "Yeah," Thor replies, clearly trying to think up a name on the spot, "it's called the ... uh ... Revengers." Yep, this is a comic book movie I can get behind.

Anna I went into this film with some trepidation. After all, it takes some serious skill to keep a comic book franchise film from sinking into mundane silliness and over-acted ludicrous situations. The writers and director of Thor: Ragnarok chose instead to make fun of themselves and the genre entirely, which hit this one out of the park. It was truly entertaining, funny, and action packed. Behind the characters are some serious acting chops as well. With a cast of veteran performers such as Hopkins, Blanchett, and Goldblum, it has a lot going for it. I also liked that while there is a team up of superheroes, it isn't the whole crew, which can get overwhelming. Instead, we get more time with some of my favorites, and the back-and-forth banter between both Thor and The Hulk, and Thor and his mischievous, self-serving brother Loki is really funny. Thor is feeling pretty lost and alone after the death of his father and the loss of his hammer at the hands of his older sister Hela (Blanchett), and he has yet to discover that his powers are much more internal than he knows. For a film all about beating the bad guy, this is a fun romp in a world where being the god of thunder proves to be both hassle-filled and hilarious.

Glen Thor's new team is indeed a motley crew. You've got a giant green rage monster, a jaded last-of-her-kind Norse warrior, a naïve and somewhat bumbling thunder god, and his homicidal half-brother who all have to join forces to kill Thor and Loki's older sister, the goddess of death, who's bent on destroying their world. I'm not sure there's any way to play this other than for laughs. Being a big, loud comic book movie, the film naturally has over-the-top special effects, amazing set-pieces, tons of action, and a ripping soundtrack—and all those elements are firing at high speed. When Led Zeppelin's "Immigrant Song" starts playing over a pitched battle, it's pretty much a perfect cinematic moment of high-level campiness. This is a cosmic adventure with a similar feel to the Guardians of the Galaxy franchise. Between Blanchett as Hela and Goldblum as Grandmaster, you've got two really entertaining, scenery chewing bad guys. Hemsworth's Thor has an everyman charm. If you were merely to delineate the plot, this film would sound pretty boring, but as a sustained joke about the preposterousness of the Marvel Universe, it's amazing!

Anna While Valkyrie is initially a "bad guy" who drunkenly captures Thor and sells him to Grandmaster, she begrudgingly joins the good side and helps Thor and The Hulk escape by stealing a ship. When the heroes ask why the Grandmaster would have a ship with no guns on it, Valkyre tells them he used it "for orgies and stuff" to which Thor replies, "Just don't touch anything." It's got that great, campy charm halfway between Guardians of the Galaxy and Deadpool, and if more comic book movies tend in this direction, I'll be very happy. Amping up the humor and willingness to poke fun at itself is a smart move for this franchise, and I'm hoping the healthy ticket sales will tell them to keep at it. As someone who went into this film unsure of whether it would manage to entertain, I can wholeheartedly say that it does so in a fun and original way. It's a lot of fun to see on the big screen as well, and the non-3-D version was plenty of fun. Waititi did a great job once again, and if he directs more films in this franchise, I will be sure to catch them. ∆