Those were the days: Cayucos in the '60s

Fishing, surfing, and hanging out at the Restroom 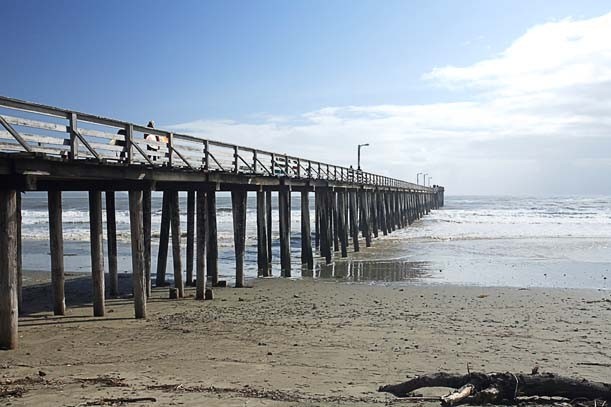 People sometimes ask me what Cayucos was like in the ’60s, because I’ve lived a block from downtown all my life. Cayucos sure was a lot different back then. All traffic going north and south went right through the middle of town, and you normally did not see a car on the move after 8 p.m. on weekdays. It was a lot like “Mayberry.” Our Andy Griffith was a mountain of a man named Roy Genardini, who was the town constable. If you were a bad boy, you had to deal with Big Roy.

There are still many folks around town who remember the ’50s, what you could call the Mayberry days. We had our own phone operator, who lived at the end of “E” Street, which Highway 1 now rolls over. She was a very cool little old lady and folks said she never listened in. Right.

If you wanted to make a call in or out of Cayucos, you had to go through her and her switchboard. All the plugs and cords had to be plugged in perfectly.

We didn’t have much creek fishing like they did in Mayberry, other than chasing steelhead in the moonlight with what everyone in those days called a “port-a-gee” fly rod (pitch fork), but we did have plenty of ocean fishing. You just went down to the B&B Café, bought a ticket ($5) and walked out on the pier. Then you were lowered down on a big platform and could hop on one of the huge fishing boats that stayed moored off the end of the pier. My favorites were the Luck Strike and the Mess.

Big reds and huge lings were the normal catch. If you couldn’t afford a ticket to go on the boats, you just fished off the pier, where you could catch little red snappers, ten at a time. The rocks above Cayucos were loaded with abalones for the taking, if you weren’t afraid to reach in the dark cracks of the rocks with your hands. Lots of other critters hung around in there too. It was a lot of fun for a kid. How Mayberry can you get?

In the early ’60s the surfing craze started. It made its way up to Cayucos from Manhattan/Hermosa Beach right around 1962. Endless Summer, perhaps the original classic of all surf movies, was soon to come out in the theaters. The first person who surfed here moved up from near San Onofre. He’s still alive and living well in Atascadero with a house full of kids.

Hanging out at Chuck’s (now Skippers) playing pinball in the “back shack” and surfing all day was the norm for a kid in Cayucos around that time. The Beach Boys became popular and started singing about the times.Surf music peaked about 1963. Being 13 or 14 years old then in Cayucos was pretty special.

In the mid ’60s, right after the surfing craze, came what could be called the psychedelic days, with lots of drug experimentation. Many of us tried peyote buttons, magic mushrooms, and cheap Mexican weed. Very little meth, heroin, or downers were used: That stuff was reserved for idiots only and did not become popular until the War on Drugs started.

Most young kids now at least get a chance to understand that hard dope will make you a real dope.

Anyhow, the Beatles landed in 1964 and Timothy Leary was promoting mind expansion from a shop on Haight Street in San Francisco every Friday night. All of us young guys were very concerned about the possibility of going to die in Southeast Asia. There was no choice in those days. Just go, go to Canada, or go to jail. I still miss a couple of my friends who never came home.

In 1968 Martin Luther King was shot and Nixon was lying about almost everything. Life seemed unreal, as we used to say. The upheaval  had a powerful effect on young people.

In 1969 Cayucos had the Restroom bar. To me, it exemplified the height of the ’60s. It was front-page news in the Telegram Tribune for months: Kids who hung out there were thrown in jail for having too much fun. When you pulled up in front of the bar, you were not sure what it was. The front of the building was painted all black and over the top in big white letters was simply the name Restroom. It had two large front entrances, each one with big double swinging doors. A sign above one said “Men” and one above the other said “Women.” In those days, you only needed to be 18 to go in a full-blown liquor bar, if sandwiches were served. It was set up similar to the way the Cayucos Tavern is today, with pool tables and shuffleboard in the rear.

Those were the days of cowboys and hippies. The cowboys didn’t like the hippies and the hippies didn’t like the cowboys. One thing out of all the notable things that happened during that year sticks out. One afternoon, one of the town’s most renowned tough-guy cowboys, who shall remain nameless and is still alive and kicking in Cambria, came in the bar with some electric sheep shears. His goal was to pick out a hippie and cut off some hippie hair.

This poor cowboy could have picked on almost anyone in the bar at the time, and most likely would have had his way. He just happened to pick on a fellow from San Luis Obipso who was one of the toughest guys that city ever produced during those years. He was kind of like a Chuck Liddell, only with long hair and hippie clothes. He was also a recently discharged Army Ranger with two black belts (he’s also still alive and well). His friends called him Big Skip. Anyhow, the cowboy approached who he thought would be easy pickings but as soon as he grabbed that hippie hair, all hell broke loose. Actually, the fight didn’t last that long. I have never seen a man to this very day get knocked to the ground so quickly and take so many direct blows to the face.

Other than an occasional fight, the Restroom bar was a very cool place. People came from all over San Luis Obispo County to party and walk the beach. One of the most fun things we used to do was encourage annoying people to sit at a certain seat at the bar. Above the bar was a false ceiling with a trap door. There was a pull string behind the bar. The bartender could pop the trap door open and down would come a full-size fully dressed dummy, hanging from a hangman’s noose. He looked entirely human in a dimly lit bar. When the dummy hit the bottom of his rope, his boots would dangle about 6 inches above the bar top.  We used to take bets on how a person would react. They either got really upset or laughed to no end; there seemed to be no in between. Today, I am sure it would cause an instant lawsuit. Back then it was just plain fun. ∆

Dave Stevens is a real estate appraiser and broker who was the announcer at football games at Coast Union and coached local Little League teams for many years. He’s lived in the same house in Cayucos since birth and builds hot rods.