'Thou shalt remain, in midst of other woe'

An exhibit at Cuesta College relies on the power of association

Squeak Carnwath's paintings are like messages from another planet or time. The repeating symbols and prisms of color could be hieroglyphs from ancient Egypt or even the pictorial musings of a graffiti artist. 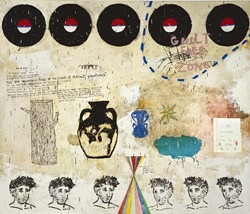 The records, labeled "side one," symbolize mortality, the fact that you only go around once. The vases--not unlike Grecian urns--both memorialize a friend of Carnwath's and visually reference homo sapiens' culture and creativity. And the faces, many of which cry vibrant blue tears, are mourners. Most of the time.

If you ask Carnwath whether she's had any formal art training--and I wouldn't recommend asking that--she'll reply that you "train" cats and dogs. People are educated.

Her artistic education includes a degree from Goddard College in Plainfield, Vt., and a Master of Fine Arts from the California College of Arts and Crafts in Oakland. Since 1971, she's taught a variety of arts subjects, including ceramics, painting, and drawing. She's currently a professor in residence at UC Berkeley's Department of Art Practice, where she's been teaching for 10 years.

That Carnwath's more than three decades of teaching experience have informed her work is obvious. One of her paintings bears the scrawled message: "lessons benefit the teacher more than the student." Her first forays into drawing with charcoals were prompted by her teaching a class about drawing, and needing to explore for herself what she wanted her students to learn.

Carnwath works out of her studio in Oakland, shifting between 10 paintings at a time, only focusing on a single piece as it approaches its conclusion.

# "I usually don't know what I'm going to do," she said. "I start out with a totally blank canvas and go from there. Sometimes it will look like a long list or colors. It's always about observations of life or what's going on, and different things morph into different forms."

She builds each piece out of layer upon layer of paint--a time-consuming process. From the layers, which gather and seem to crack at various points on the canvas, her symbols emerge as text on aged parchment or the walls of an ancient cave. Collectively, her works read like obscure messages from someone trapped, appealing to the viewer for aid and understanding.

Carnwath realizes that her paintings are a kind of language. In fact, that's a concept she frequently plays from. One image asks, "If painting is language, is this thinking or observation?" She often paints lined paper with messages onto her canvases, a nod to the trompe l'oeil style. One paper says, "humans need to make connections to find meaning"--a statement that clearly applies to anyone seeking a specific message in her work. Only by assigning significance to her most frequently used symbols and then threading together the loose ideas with the words and phrases that appear randomly--"all the universe is full of the lives of perfect creatures," "you are experiencing the before and the after," "Guilt Free Zone"--is it possible to divine a particular point. But even then, one viewer's take on a row of records above a row of heads won't necessarily be the same as everyone else's.

"I think that it's hard for people's lives to be separated from how they perceive the world of art," Carnwath said. "Their own experiences will color whatever they see. I think that the paintings are sort of self-explanatory. There are clues written in the paintings. But I don't think it's fixed. I think it's pretty elastic."

Not all of Carnwath's emblems are immediately evident. A coloring-book fairytale princess with puffed sleeves, poised above the question "Missing, Have you seen me?" appears in several of her paintings.

But Carnwath's ancient vases marked by figures reclining beneath trees recall a past artist who reflected on the consequence of a Grecian urn. The poet John Keats was so moved by one such vessel, an "unravished bride of quietness," that he was led to his now famous observation that "beauty is truth, truth beauty." It may seem counterintuitive that such simple images could draw upon and reference an endless trove of ideas, feelings, and experiences, but chalk it up to the power of associative thought. Star equals light. Equals good. Equals the Fellowship of the Ring. Equals New Zealand. Or, in this case, record equals finite. Equals mortality. It's all just a matter of where you want these paintings to take you.

"Squeak Carnwath: New Paintings and Prints" runs through March 5. The Cuesta College Art Gallery is open from 11 a.m. to 4 p.m., Monday through Friday. Local art collectors are going to have to reach deep into their pocketbooks if they want one of Carnwath's paintings to adorn their walls. A single piece costs between $55,000 and $90,000. For more information, call 546-3202 or visit www.squeakcarnwath.com.