The famous philosopher is now a ripping bassist 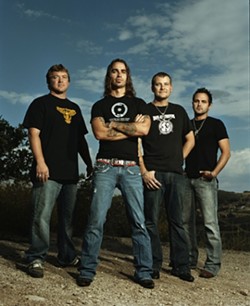 # Okay, so there's a guy named Grady Cross, a guy named Cody Canada, a guy named Randy Ragsdale, and a guy named Jeremy Plato, and they call themselves Cross Canadian Ragweed. Clearly, the burning question is: Did Plato replace some guy named Weed? Apparently not. Plato, the bassist, just gets no respect.

Formed 13 years ago in Yukon, Okla., the quartet is a gifted alt-country act of the red dirt variety--think acts such as Stoney LaRue, Micky & The Motorcars, Reckless Kelly, Wade Bowen, No Justice, and Brandon Rhyder.

CCR is especially tenacious, playing about 260 dates a year. Think about it! The average American worker only shows up for work about 240 days a year. And these guys are musicians. They should be smoking weed in their van and eating rolling hotdogs at 7-Eleven, not touring tirelessly.

The band is currently touring in support of their fourth studio album, Mission California, filled with 14 tracks--from roadhouse rockers such as "Record Exec," "Smoke Another," and "Deal," to the poppy "NYCG" and more ballad-esque numbers "Dead Man," "Soul Agent," and "Lawrence," the latter featuring special guest LeAnn Womack.

Check 'em out Monday, Jan. 14, at 8 p.m. in The Graduate. This is an 18-and-older show with a full bar available, brought to you by Otter Productions Inc. and KJUG 98.1 FM. Advance tickets are $16, plus handling fee (door tickets will be $20), available at all Vallitix outlets including Boo Boo Records in San Luis Obispo, the Mustang Ticket Office on the Cal Poly Campus, the MidState Fairgrounds in Paso Robles, by phone at 1-888-825-5484, or online at vallitix.com.

Surfing and music go together like Jack and Johnson or Donovan and Frankenreiter, and now surf and music fans have another famous surfer-cum-musician to cheer on: Timmy Curran.

At the age of 18, Timmy placed 10th on the Surfer Poll for people's choice of "Most Favorite Surfer" in the world--the only person to place in the top 10 who wasn't on the world tour at the time. In 2002, he was the third most exposed surfer, according to Transworld Surf. When he's not surfing, he enjoys photography, shaping surfboards, and producing records and performing, which he'll do at Downtown Brew on Friday, Jan. 11 (7 p.m. 16-and-older $10 advance or $12 at the door), in support of his new album, Word of Mouth, which he's giving away for free on his website, timmycurren.net.

There's also talk of a free in-store performance at San Luis Surf Company on Higuera. Call them for details. Meiko, Simon Dawes, and Shane Stoneman will open the DTB show.

# The Painted Sky Concert series, in association with Code Pink, is supporting a fundraiser for world peace and the Holy Road Tours Union by featuring an intimate acoustic concert with Lizzie West and Friends on Saturday, Jan. 12, at 8 p.m. in Cambria's Painted Sky Recording Studios.

West was named the 2003 Artist of the Year for AOL. She's also been featured singing her song "Holy Road" in a national ad campaign directed by Spike Lee, and her song "19 Miles to Baghdad" has been featured six times on Democracy Now!

In 2004, West's career took a startling turn. With four records left on a five record deal with a major record label, after experiencing what she could only describe as censorship, she left the label to record on her own. After the loss of both of her parents to cancer, she released the deeply personal and politically charged I Pledge Allegiance to Myself.

Warning Republicans! You might find this show to be politically sensitive or insensitive to your views. Tickets are $20, available at Boo Boo Records and Cambria Business Center, or by calling 927-8330. If not sold out, tickets will be available at the door.

I'm sure punk fans are atwitter with anticipation over the impending Circle Jerks show. The ancient and mighty progenitors of hardcore rarely tour outside the L.A. area, so having them in SLO is a treat of the moshing-elbow-to-the-kidneys variety.

# Created in 1979 in beautiful Hermosa Beach, the Jerks were formed by one-time Black Flag singer Keith Morris and Greg Hetson (who later moonlighted with Bad Religion), and in 1980 they recorded Group Sex, a seminal 14-track record whose running time was a whopping 15 minutes! The album is considered a must have for any self-respecting hardcore fan.

The group's reputation was cemented when they appeared in the Penelope Spheeris documentary The Decline of Western Civilization, featuring live versions of five songs from Group Sex on the soundtrack.

The band worked in fits and starts, eventually disbanding in the late-'80s, but they reformed in 1995 and released a sixth album, Oddities, Abnormalities and Curiosities. The album featured a song with former teenybopper queen Debbie Gibson, but the reunion didn't last long. Still, since early 2000, the band has played sporadically, and on Sunday, Jan. 13, they'll play Downtown Brew for an all-ages, 7:30 p.m. show. Tickets are $13 advance at Boo Boo's or the venue, or $14 at the door. Last of the Believers will open.

The Army marches on

# The last time Tiger Army played Downtown Brew, the place was packed to the gills. According to club co-owner Korie Newman, "These guys are too big for Downtown Brew, but they loved the vibe of our intimate venue and our staff and chose to play here again rather than Cal Poly or the Vets Hall. This is too big!"

The psychobilly band is now entering its 12th year, having played their first gig in Berkeley back in March of 1996. It's a band that apparently can't be destroyed. Through numerous personnel changes and even one member (Fred Hell) being shot four times, including once in the head, the band has stomped on.

Tiger Army plays an all-ages show on Wednesday, Jan. 16, with opening acts Revolution Mother and Dear & Departed. This 7 p.m. show costs $16 in advance at Boo Boo's and the venue.

In what has to be one of the greatest reggae triple bills in SLO Town history, Pato Banton, Eek-A-Mouse, and The Mystic Roots Band all take to the stage on Thursday, Jan. 10, at Downtown Brew. Banton, one of the early English reggae artists, whose biggest hit is "Don't Sniff the Coke," has enjoyed a two-decade

# career. The towering (6-foot,6-inch!) Eek-A-Mouse is known for his Bobby McFerrin-like sounds and hits such as "Wah Do Dem." The newcomer is The Mystic Roots Band, which fans describe as a combination of No Doubt, Sublime, The Police, Sean Paul, The Fugees, and Cypress Hill, with the spirit and consciousness of Bob Marley and Spearhead. This is a 21-and-older show that costs $20 at the door.

Music Department Chair and pianist W. Terrence Spiller will give a benefit recital of works by Robert Schumann, Francis Poulenc, and Sergei Rachmaninoff at 8 p.m. on Friday, Jan. 11, in the Spanos Theatre at Cal Poly. Tickets are $6 for students and senior citizens and $10 for the public, on sale at the PAC Ticket Office.

Amazing fingerstyle guitarist Robert Longley isn't afraid to tell it like it is: "I know I am the bastard child of Flamenco and classical guitar, but I prefer it that way." The popular performer, composer of nine albums and two soundtracks, always attracts a crowd when he plays the Central Coast. The world-class guitarist performs at Castoro Cellars on Friday, Jan. 11, at 7:30 p.m. for a mere $15, under the aegis of SLO Folks. Call 238-0725 to reserve your tickets.

Richard Gilewitz is offering a weekend concert and workshop at Matt's Music, Stage & School, with the concert scheduled for Saturday, Jan. 12, at 7 p.m. ($15) and the workshop on Sunday, Jan. 13, at 1 p.m. ($30). The fingerstyle guitarist has been described as zany, and he'll be arriving with a "treasure trove of free swag to give away, too!" The popular guitar wizard's concert 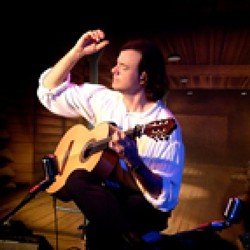 # is titled "Acoustic Adventures" and features some of his traditional favorite stories, some not-so-common tales, as well as his original and popular tunes. Call 237-0054 to reserve seats.

Lovely and lilting, the folk stylings of The Bowmans--sisters Sarah and Claire--are not to be missed! They hit Linnaea's Cafe on Sunday, Jan. 13, to promote the gorgeous debut CD Far From Home.

Celebrating its 50th anniversary this year, the Monterey Jazz Festival's 50th Anniversary Band will perform at the Christopher Cohan Center on Wednesday, Jan. 16, at 8 p.m. The band features an all-star cast, including pianist and Musical Director Benny Green, trumpeter Terence Blanchard, saxophonist James Moody, bassist Derrick Hodge, and drummer Kendrick Scott. Vocalist Nnenna Freelon will also be a featured member of the group. "The showcase promises a wide array of jazz styles, with something for everyone live on stage," said Peter Wilt, Cal Poly Arts Interim Director. Tickets range from $36 to $48, with student discounts available, and may be purchased at the PAC Ticket Office or by phone at 756-2787.

The Downtown Association is accepting applications for the 2008 Concerts in the Plaza series this upcoming summer. This popular Downtown event is now in its 13th year, and new bands are strongly encouraged to apply. Bands must be local and all music submitted must be original. Send promo packets (bio, photo, demo tape or CD) to the Downtown Association, 1108 Garden St., Suite 210, SLO, CA 93401. The deadline to submit is Jan. 31. For more info, contact Katie Hollingsworth at 541-0286. ?

Glen Starkey knows you're only young once, but you can be immature forever! Tell him how well he's aged at gstarkey@newtimesslo.com.