If you ask SLO County resident and mother Shannon Galvan for her thoughts on distance learning and its impact on her kids, she won't mince words.

"People should be outraged," she said. "They've learned nothing for the past year." 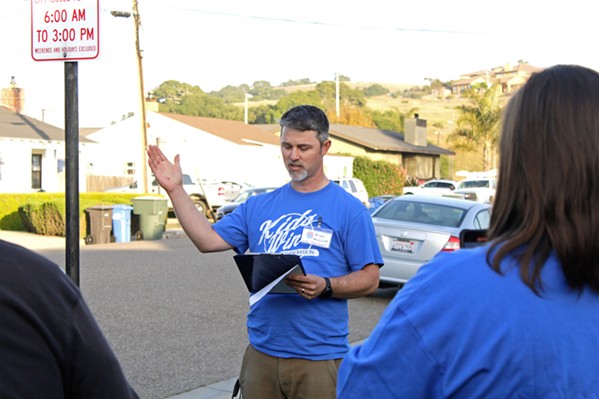 Galvan's kids are both juniors at Arroyo Grande High School, and, like students statewide, they've spent months learning online from home during the COVID-19 pandemic. Teachers and district officials throughout SLO County say they're doing what they can with the time and resources allotted, but parents like Galvan worry distance learning will have lasting negative effects on their children's mental and physical health.

For Galvan's family, the past year—largely spent locked away from friends, teachers, and extracurricular activities—wasn't easy. Now her kids attend in-person classes under Lucia Mar Unified School District's hybrid learning model, but Galvan said it's only for a few hours each day. The district isn't offering busing to most families right now, making it nearly impossible for most working parents to put their kids back into in-person school.

Her kids' classes are almost empty every day, she said. It's just not the same.

Now Galvan is leading an effort to recall three of the seven members serving on Lucia Mar's board of education, who she said failed to advocate for a return to in-person learning when allowed "even under the governor's ridiculous guidelines." The goal, she said, is to ensure that Lucia Mar schools will be fully reopened for in-person classes when the next school year starts in August.

On the evening of May 4, Central Coast Families for Education Reform, a group that Galvan helped form through Facebook around six months ago, gathered outside Lucia Mar's district office at 602 Orchard Ave. in Arroyo Grande and announced plans to recall board members Colleen Martin, Dee Santos, and Donald Stewart. The group, which started as an effort to get sports back up and running, has more than 900 members on Facebook.

Michael Mulder, vice president of the group, said the three members in question have demonstrated that they "do not support the best interests of our students," by voting against school resource officers in schools, blaming parents for low student achievement throughout distance learning, and allegedly violating the Brown Act by not allowing in-person or live public comment between March and September 2020.

Mulder said the group recently took the first few steps in launching a recall election, notifying the county and board members of the intent to recall. The district will have time to respond, then the group will have a few months to collect around 8,500 petition signatures, which, if successful, would then force the county to host a recall election.

In an email sent to district employees on May 4, Lucia Mar said such an election would cost around $350,000 of the district's general fund money.

Lucia Mar board members Martin, Santos and Stewart wrote in a joint statement on May 5 that the pandemic has been challenging for everyone. But many students, they said, are back in school and athletes are competing in sports. The district is planning "robust" end of year activities, they said, including dances and graduation ceremonies, and support services are being expanded.

"Student success and the health and safety of our students and staff have guided every decision made unanimously by the seven members of the elected board of education," the board members wrote. "The district followed the legally required state and county guidelines. We reopened classrooms and campuses as quickly as allowable while prioritizing keeping our students, families, and staff healthy, safe, and alive."