Since the middle of November, callers in San Luis Obispo County who dialed 211 have been directed to a social service hotline that helped connect them to more than 600 local agencies, programs, and support groups that could assist them with solutions to various troubles from tax problems to drug rehabilitation. 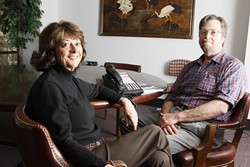 "It's a place where people can call for support and if they are in crisis," said Linda McGregor, executive director for the organization. "Some calls are as simple as, 'Where do I get a flu shot?' Other calls are problems harder to solve, like food, shelter, clothing, abuse, and domestic violence."

According to the group's website, 211 was first launched by United Way Metropolitan Atlanta in 1997 and now reaches approximately 196 million people in 41 states and the District of Columbia.

In SLO County, 211 is a 24-hour bilingual volunteer organization with 40 volunteers, all of whom must complete 80 hours of classroom and on-the-job training.

McGregor explained that local volunteers range in age from early 20s to 70s and come from all walks of life.

"We have volunteers that have wonderful lives, feel fortunate, and want to pay back," she said. "And others have life experiences that make them want to help others. They wished they had a place to call. No special skills are required, just [be] open minded and be non-judgmental."

During the recent Southern California wildfires, McGregor said 211 as a whole received more than 135,00 calls--most of which were from people who just wanted a friendly ear. If something like that were to happen in SLO County, the 40 local volunteers wouldn't be able to handle the volume of calls.

McGregor, who was a volunteer herself for more than four years, said that when people are in crisis it may be hard for them to see options.

"We at Hotline can get callers to see there's help available, get through a difficult moment, night, or hour," she said. "I know from personal experience. I've helped people live a least another day and see more options."