This Friday, March 18, three of the famed original “Takoma 7” will make a stop at the Steynberg Gallery (7:30 p.m.; all ages; $20 tickets at 547-0278) as part of their “Takoma Records Guitar Masters Tour.” Fingerstyle virtuosos Peter Lang, Rick Ruskin, and Toulouse Engelhardt are among the best living guitarists. The three—along with Kottke and Basho—were hand-picked by Fahey to join his label.

“I’m quite excited to be playing with Rick and Toulouse on this upcoming tour,” Lang enthused in press materials. “For the first time, it brings these three original Takoma guitarists together. I have many fond memories of those early years, and look forward to creating some of that ambiance with these two other masters of fingerstyle guitar.”

Engelhardt added, “It will be awesome to be back in the OK Corral with two of my fellow gunslingers! It’s going to be one hell of a shootout!”

One local guitarist, Tim Pacheco of Ragged Company, sent me an email about how important this concert is going to be: “I started playing instrumental guitar back in the mid-’70s and these three guys—especially Peter Lang—were early influences for me and they were all associated with the legendary John Fahey and his Takoma Records label. Peter Lang’s The Thing at the Nursery Room Window is a powerful and classic instrumental guitar record, right up there with Leo Kottke’s 6 & 12-String Guitar record released on Fahey’s Takoma Records.”

Expect alternative tunings, effective use of minor keys, atonality, and other techniques mere strummers only dream of mastering. Guitar fans should not miss it!

It’s funky time! You can avoid the chaos of downtown SLO’s St. Paddy’s Day festivities but still get into the party spirit when Numbskull and Good Medicine Presents bring the Pimps of Joytime to Tap It Brewing Co. this Thursday, March 17 (7p.m.; 21-and-older; $15 presale at ticketfly.com or $20 at the door). 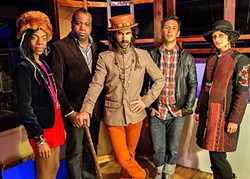 You can’t help but feel like you’re super fly when you’re listening to these modern groove masters that mix New Orleans funk, ’90s house, ’60s salsa, and hip-hop into a sound that will make you walk like Shaft, John Shaft.

The band’s album Jukestone Paradise is basically a soundtrack for Brooklyn hipsters, and indeed, they developed their sound in New York’s hippest borough.

“Over the past decade, the group’s grassroots following mobilized from the underground club scene in New York to sell out historic venues like the Fillmore in San Francisco and showcase at festivals across the U.S. and Europe,” their bio boasts. “With more than 1 million Spotify plays to date, it seems word truly does spread to the wise. And when you pair high-caliber musicianship with rhythm and groove as universally enticing as it is unconventional, there’s no denying the dance floor is magnetic.”

I can’t help but swagger like a pimp when I hear their music. 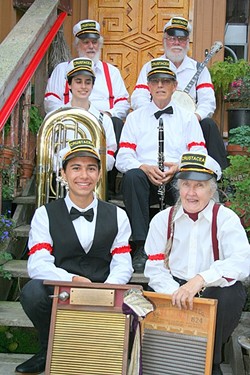 Sometimes one washboard is simply inadequate, especially if you’re the spunky Crustacea Jazz Band, who once again will play the SLO Farmers Market this Thursday, March 17, from 6 to 8:45 p.m. with not one, but two washboards to accompany their early jazz sounds. “I’m planning to give a free CD of our band’s favorite tunes to the first two people who show up that night with a nicely lettered sign at least 9 inches and 12 inches that says ‘MORE COWBELL, PLEASE!!!!,’” said washboard player Anne Abler, who I bet will also give a CD to someone with a sign that reads “MORE WASHBOARD, PLEASE!!!”

Unfinished Business is bringing its special “Tribute To The Beatles Show” to Mr. Rick’s this Friday, March 18, starting at 8 p.m. ($5 cover). The ’60s rock ’n’ roll specialists have been playing together since 2004, but they cooked up this tribute a couple of years ago to mark the 50th anniversary of The Beatles American debut on the Ed Sullivan Show in 1964. They’ll play about 40 Beatles’ classics during the show.

More hot swingin’ jazz awaits when the Basin Street Regulars holds a concert this Sunday, March 20, at the Arroyo Grande Portuguese Hall (707 Huasna Rd.). The event begins with an 11 a.m. jam session (bring your instrument and join in!) followed by performances from The Creole Syncopators and swing band the Dos Pueblos High School Jazz Band. The Syncopators are celebrating their 32nd year playing hot jazz and blues from the ’20s as well as South Side Chicago blues and New Orleans style jazz. Tickets are $10 ($5 for members) and food and drink are available for purchase.

Coalesce Bookstore once again hosts The G. Roger Bailey Classical Guitar Scholarship Concert this time featuring Samuel McLain on Sunday, March 20 (2 p.m.; all ages; $20; call 772-2880). McLain was born in Upland and has been playing guitar since his teens. “His early guitar teachers include Bruce Hunter and Mike Sawitzke, and he recently completed a master’s of music degree in Classical Guitar Performance under the tutelage of previous scholarship benefit performer Stuart Green,” according to press materials.

Cuesta Voce and special guest Audio Radiance present an evening of vocal jazz and a cappella sounds this Sunday, March 20, at the Steynberg Gallery (7:30 p.m.; all ages; $10 at the door). Cuesta Voce is Cuesta College’s excellent vocal group and Audio Radiance is a well regarded a cappella R&B group featuring eight “professional quality hip and hard-grooving singers and vocal percussionists” from Creston, Iowa. The college vocal group is now in its 24th year of performing, and graduates of the ensemble have gone on to perform with The Four Freshmen, m-pact, Vocalogy, and The Beach Boys. 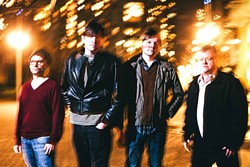 Portland-based Americana act Shoring is rolling through the area for two shows this week, Sunday, March 20, at Otter Rock Café (7 p.m.; all ages; free) and Wednesday, March 23, at Frog and Peach (10 p.m.; 21-and-older; free). Drawing heavily from folk and Americana influences, as well as ’60s pop and ’70s rock, the band features “a rhythm section steeped more in the virtues of Cheap Trick than James Taylor, [which] gives the songs a drive and an edge not found in modern folk,” the band said via email. “And the dreamy keys coupled with exquisite guitar work add a nice sheen to an album whose subject matter isn’t afraid to plumb the depths of love, heartbreak, loss, and rebirth. Too driving and dynamic to be folk, too thoughtful to be pop.”

Is there anything as stirring as Taiko drumming? All those people working in unison, creating a driving rhythm that you can feel in your bones! This Monday, March 21, Cal Poly Arts presents TAO: Seventeen Samurai at the PAC-SLO (7:30 p.m.; all ages; $30.40 to $58 at 756-4849 or calpolyarts.org). This high volume performance features “athletic bodies and contemporary costumes combined with explosive Taiko drumming and innovative choreography.” A free pre-show lecture will begin at 6:30 p.m. in the PAC Pavilion, led by Tetsuo Uyeda from the Buddhist Temple/SLO.