Greka President Andrew DeVegvar said the energy company has been the victim of a “political overreaction” in the final days of 2008. He made the statement at a Dec. 29 press conference, criticizing Santa Barbara County’s response to a series of recent accidents at the company’s Bell Lease facility in Santa Maria: Dec. 26, 27, and 28 each marked spills of oil and oily water at the site. 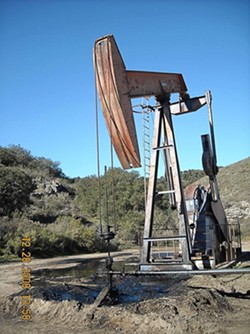 County officials issued a stop-work order for the facility near Palmer Road after the spills, and later defended the action as valid. Officials revoked the company’s permit to operate the facility until county and state officials could complete an investigation and the facility is deemed safe to operate, county fire spokesman Capt. Eli Iskow said in a press release.

The troubles began on Dec. 26 when personnel from the county fire department’s hazardous materials unit reported that approximately 14 barrels—or 600 gallons—of crude oil and 1,000 to 2,000 gallons of contaminated water spilled from an above ground vent. The spill crossed Palmer Road, but Greka employees diverted the flow before it could ooze into a seasonal creek.

A clean-up crew made up of county officials and officers from the California Department Fish and Game and the Environmental Protection Agency responded quickly.

On Dec. 27, a mistakenly opened relief valve spilled up to 840 gallons of crude oil and more than 8,000 gallons of produced water down a ravine into a creek bed, according another release from the county fire department. The mixture of crude oil and water oozed about half a mile down the creek.

On Dec. 28, officers reopened Palmer Road, but there was more bad news to come. The fire department reported a packing valve at one of the company’s wellheads leaked another 120 to 160 gallons of crude oil and an undetermined amount of polluted water.

All three of the spills happened at different locations at the facility. County and state officials are currently overseeing cleanup efforts for the last two spills.

In a media release on Dec. 29, Greka officials reported that one broken pipe, and an employee who turned a wrong valve, caused “a series of events that led to the releases on Saturday and Sunday.”

“We haven’t seen any major impacts on the local environment or wildlife,” said Carol Singleton, spokeswoman for the California Department of Fish and Game. Fortunately the creek bed was dry, she added, so the spill into the creek wasn’t as bad as it could have been.

On Dec. 29, at a press conference in front of the Betteravia Government Center in Santa Maria, Greka President DeVegvar said he didn’t think the stop-work order should be effective for the entire facility—it should only apply to the impacted portion, he argued.

While admitting oil spills aren’t a good thing, DeVegvar said the spills were caused by human error, rather than poor infrastructure or operational procedures. Human error, he added, “can happen anywhere.”

DeVegvar pointed to other oil companies in the area that spill oil on and offshore, claiming selective enforcement: “None of these companies are being victimized by [a] stop-work order.”

County officials later countered that claim, saying that an emergency response team and a petroleum unit are working to clean up the mess as fast as possible.