To arrange for the Threshold Singers to perform for someone, contact Hospice SLO County by calling (805) 544-2266. For more information on the larger Threshold Choir organization, visit thresholdchoir.org.

When they finished singing, there was no applause.

It wasn't the first time this had happened. Singer Hannah Tenpas said it doesn't bother her or the rest of the group, though. 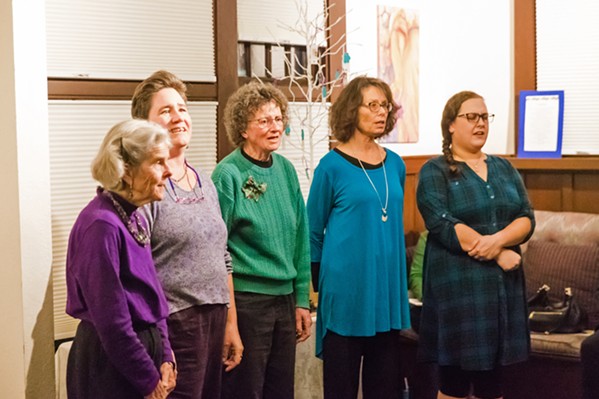 "We're not a performance group," Tenpas said. "When we sing for people we want to really create an intimate, heart-to-heart connection with them. We don't sing for the accolades and the applause. It's singing for people who are maybe not conscious, but at least hearing is the last sense that goes away."

Tenpas is the "song mama," or coordinator, for Hospice San Luis Obispo County's Threshold Singers. The group is a chapter of the national organization, Threshold Choir, and they sing in a cappella to provide a song bath of sorts for those who are grieving, sick, or experiencing a life-threatening illness. The idea is to offer a little peace, tranquility, and calm at the end of life.

All of the songs the Threshold Singers perform are written by chapter members, like "We are all just walking each other home," which the SLO chapter aptly performed at Hospice SLO County's Paws to Remember pet remembrance ceremony on Dec. 10 at their downtown offices. The song was inspired by a Ram Dass quote.

Threshold singer Sylvia Alcon remembers going to a local nursing home to sing for a woman with breast cancer whose daughter and ailing mother were also there.

"We told them, 'Hopefully we can just create a space for you to relax and be here,'" Alcon said. "We noticed other people were coming from other parts of the nursing home to listen. It was a very good feeling. We were all very teary-eyed. We felt as though we had done what we came to do."

Almost 15 years ago, Alcon's husband died, and she said hospice was very helpful to her. She wanted to give back and even did the training to be an in-home hospice volunteer, but it brought back too many memories.

"So when I heard about this singing and I realized I would be with other people, it just felt like the right thing to do. And I do love singing," she said.

The singers perform in groups of three or so to create the intimate feeling they strive for and to not overcrowd people's homes or nursing or hospital rooms. The SLO chapter meets twice a month to practice. Tenpas said the only requirement for new members is the ability to carry a tune and a desire to be a part of the group.

"There's something really magical that happens when we sing for other people," Tenpas said. "It's intimate. If this sounds like something that would be beneficial, that someone would enjoy, we're happy to bring it to them." Δ

Arts Writer Ryah Cooley can't sing, not even a little. Contact her at rcooley@newtimesslo.com.