Through the clouds: Taking the leap with Skydive Pismo Beach

Things will never be the same.

While flying down toward earth at breakneck speed, life is put into a completely different perspective. It should be no surprise that the world looks altered at 10,000 feet, but I didn’t get the vertigo effect I expected. What I got was a real-life painting of green and brown boxes that ran into the sea.

Participating in Skydive Pismo Beach’s mid-tier leap from the sky on May 15 was a blood-pumping experience, especially because it was the first time. There’s nothing like the first time, right? I remember reading over the contract that warns of possible death and as I signed my name on the dotted line, I took all the liability for anything that could go wrong. While it’s rare that anything goes awry, that doesn’t mean that everything is rainbows and gummy bears—people have died during this thrill ride. The last fatal skydiving reported to the United States Parachute Association was in July 2015. 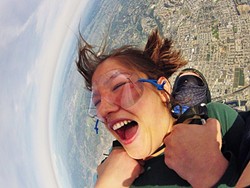 After I take full responsibility for any mishap, the team helps me gear up, including a pretty hefty harness and goggles to shield my eyes from the vicious, 120 mph wind that would soon be attempting to pull the flesh off my bones.

We drive to a small airport in Pismo Beach that holds one small plane that looks like it’s held together by duct tape and bubble gum. My hands are shaking as I enter the plane. I’m not sure if it’s because I know what’s about to happen or if I’m simply terrified of getting in such a small plane. My aerodynamics professor, Bruce Wright, warned me about single-engine planes. In fact, there was a question on my final in that class that read some thing like: “True or false: Bruce won’t get in a single-engine plane.”

The ride to the top feels like forever. I watch the altimeter, a device that skydivers wear on their wrist to measure altitude, climb ever so slowly. Even though I know I’m not jumping alone and literally need to just sit back and enjoy the ride, I can’t help but worry, but when the big moment comes, I don’t have time to be apprehensive.

A man straps me to his chest. He tells me that once he opens the door, I need to put my feet on what they call the diving board—a small platform, no bigger than 2 feet by 1 foot, that sits atop of the wheel of the plane—and prepare myself to jump. When the door opens, I feel my heart burst through my chest. I hold onto the plane for dear life. The instructor told me that once he taps my shoulders, I have to cross my arms.

I won’t repeat what the next words that come out of my mouth, but whatever expletives come to mind, that’s probably close enough.

And that’s what happens when your body floods chemicals into your brain that tell you that you’re about to die. The blues and greens, browns and yellows of the world are gorgeous and with the calmness, it’s truly ecstasy. Once the parachute opens, about 45 seconds in, everything comes rushing back and I sit on top of the world for a moment. The ocean never looked as blue and endless. The sand dunes never looked so small.

Do yourself a favor and jump. Despite conventional wisdom, I say do look down.