A man who recently allegedly stabbed an elderly Arroyo Grande man while high on a mysterious “leafy” substance had been taken to a hospital for a mental health screening and released after another alleged attack on family members in April. 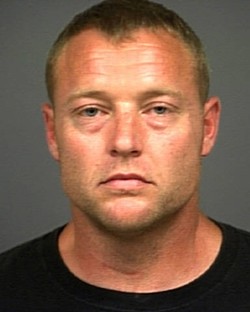 Thomas Sandercock, Jr., 35, was arrested by Arroyo Grande officers on the morning of May 28, for allegedly stabbing 90-year-old Edgar Theyerl multiple times. Theyerl, the boyfriend of Sandercock’s grandmother, was treated and released from Arroyo Grande Community Hospital and is expected to fully recover from his wounds, according to police.

As of this printing, Sandercock remains in county jail on $500,000 bail, on suspicion of attempted murder.

This is not the first time Sandercock has appeared within the pages of New Times. He was among 12 locals arrested in December 2010 in the “Operation Green Sweep” raids on mobile medical marijuana delivery services. The criminal case against him for possessing and selling marijuana was dismissed and later appealed by the SLO County District Attorney’s Office. The appeal remains ongoing.

But this is also not the first time police encountered Sandercock for strange behavior. Sandercock’s sister and brother-in-law—who asked not to be named because of the sensitivity of the issue—told New Times that Sandercock had previously lived with the couple in their Paso Robles home.

The couple said Sandercock has a history of mental health problems and suffers from seizures. According to the brother-in-law, on the night of April 1, the couple awoke to find Sandercock standing in their bedroom, naked and holding a saw.

He said they fended Sandercock off, locked him out of the house, and called the police. According to Sandercock’s sister, Paso Robles police officers responded, and Sandercock was taken to Twin Cites Community Hospital in Templeton to be evaluated by a county mental health caseworker.

Only hours later, Sandercock’s sister said, he was released. His family members decided not to pursue pressing any charges, but exactly how he was cleared to walk out of the facility on his own remains unclear. Paso Robles police confirmed in a public records act request that an officer had contacted Sandercock outside the home and paramedics transported him to Twin Cities, but said they couldn’t disclose the rest of the story—nor provide New Times with a police report of the incident—because it involves medical information.

Sandercock’s sister told New Times the family declined to press criminal charges for the Paso Robles incident because “the jail system is not the right treatment” for Sandercock.

Since January 2012, she said, her brother’s problems had gotten worse, and the family has been struggling with the county’s mental health services and a specialized care and research facility in Phoenix, Ariz. The latter canceled his appointment just days before his latest arrest, she said. A spokesperson for that facility declined comment.

“I’ve been told that I’m making my story too complicated, that [Sandercock’s] problem is not a mental health problem, but a neurological problem,” she said. “They keep wanting to pass the buck … . They want to treat us like we’re crazy, when we’re literally begging for help.”

Representatives from SLO County Mental Health Services didn’t respond to a request for comment. Such agencies are bound by patient privacy laws.

“We’ve had some real problems trying to get him some help,” Sandercock’s brother-in-law told New Times. “But we’ve been told that until he actually hurts somebody, there’s nothing anyone can do.”

Following the Paso Robles incident, the couple said, Sandercock went to live with his grandmother in Arroyo Grande.

According to a police report, at approximately 11 a.m. on May 28, firefighters and medics were dispatched to a residence on Hillcrest Drive in Arroyo Grande on a report of a male suffering a possible seizure.

Upon arrival, responders found Sandercock, who was reportedly “combative,” as well as Theyerl, who was suffering from multiple lacerations to the back and two puncture wounds to the left side of the chest, inside the residence.

Theyerl could not be reached for comment as of press time, but according to the police report, he told investigators that Sandercock had smoked a substance outside the home before the incident. When he returned inside, Sandercock allegedly began dragging Theyerl’s girlfriend—who is not being named—into the kitchen. When Theyerl came to his girlfriend’s aid, Sandercock allegedly began stabbing him with a 10-inch bread knife.

Sandercock’s sister was on the phone with Theyerl’s girlfriend when the incident began and called police.

According to a police report, Sandercock later told investigators that he had smoked “cherry potpourri” in an aluminum foil joint prior to the incident and told investigators he “tripped out,” started “seeing what happened before it happened,” and heard voices.

Arroyo Grande Cmdr. Beau Pryor told New Times that police have yet to verify what the “leafy” substance was, but he said it definitely wasn’t marijuana. He said it’s currently being tested, and the department should know within the week.

Sandercock appeared in San Luis Obispo Superior Court for arraignment on May 31, and was appointed public defender Jim Maguire. Maguire told New Times Sandercock’s legal proceedings were continued for two weeks while he decides if he wants another attorney.