Throw it away? Waste authorities try to get the word out about what's really recyclable

The SLO County Integrated Waste Management Authority is urging the public to be more conservative about what it puts in blue bins. For a full recycling guide, visit iwma.com/guide.

That used to be the mantra in recycling, repeated over and over to the public by waste companies. The saying urged consumers to always recycle "borderline" items, and let waste workers sort it out later. 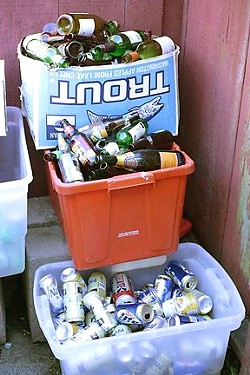 But in recent years, that mantra has completely turned on its head. Now it's, "When in doubt, throw it out."

Massive shifts in the recycling market—namely China's refusal to take most plastics anymore—have upended the traditional U.S. recycling model. Now, the costs associated with cross-contamination are higher than ever, and keeping the blue bins free of trash is as important as ever.

Gomez—who's been at the front of the charge in SLO to ban or restrict the distribution of single-use plastics—told New Times that for decades the U.S. "got away" with sending our plastics to China, leaving the country with a long history of pollution problems in charge of handling our waste.

For the most part, Gomez said, that exchange didn't actually result in recycling. Using cheap labor, China sorted the trash from recyclables and disposed of the trash in environmentally unfriendly ways.

"We as consumers are still under the false assumption that what we threw in the blue bin was getting recycled," Gomez said. "The fact is, it wasn't. Somebody was hand-picking it in China and the trash was getting burned or thrown into rivers.

So we were just creating a pollution problem somewhere else."

Now that China has largely withdrawn from that role, domestic companies are left confronting some of the toughest realities of recycling. At the core of that, according to Gomez, is our unsustainable addiction to plastic.

"Coca-Cola, for them it's far less expensive to ship their stuff in plastic, but they're not paying for the downstream effect," Gomez said. "They've put it on our waste system to handle that ... and we've never been able to handle it."

The recent industry shakeup has cities and garbage companies raising curbside pickup rates, partly to cover the costs of sorting through cross-contamination. Rate hikes locally have been as high as 14 percent in SLO and 25 percent in Los Osos.

In turn, waste authorities like the IWMA are scrambling to try to rewire the public's recycling mindset to the new mantra: "When in doubt, throw it out."

"We are trying to clean up our messaging," said Brooks Stayer, the executive director of the IWMA. "This year we started multi-media campaigns—Twitter, Facebook, Instagram—doing constant messaging on recyclables."

Here is what's OK to throw in the blue bin:

Here are the items that should not go in the blue bin, but are commonly found there:

IWMA's website has the full guide, and it includes instructions on how to recycle special items like e-waste or hazardous materials.

Gomez noted that paper cups, like a to-go coffee cup, are one of the most commonly mis-recycled items. They usually have a thin layer of plastic or wax on the inside, which makes them unrecyclable. Throw away the plastic lids, too.

"If it's smaller than your hand, chances are it won't make it through the system," Gomez explained. "Chances are it gets crushed."

With the new recycling paradigm, local agencies like the IWMA will face a tall task to change consumer habits. But Gomez also sees it as an educational opportunity.

"I don't think it's the public's fault because that was the messaging that was continually pumped out," Gomez said. "We need to educate people more than ever because the system is difficult to understand." Δ