About 15 minutes into Werner Herzog’s 2003 documentary Wheel of Time, you see a flat, blue surface surrounded by 20 to 30 people in orange and red robes. They’re Tibetan Buddhist monks chanting in unison, ringing bells, and reciting mantras around a table festooned in flowing drapes. They are consecrating the site where some of them will build an immense and intricate piece of sand art known as a mandala.

In Sanskrit, mandala translates to “circle” but has become known as the term for a traditional Asian practice of circular sand art. For centuries, mandalas have been a central object of worship in Hinduism, Jainism, and Buddhism. And in late April and early May, the Tibetan monks from the Drepung Gomang Monastery will be visiting the Central Coast for a tour that will showcase this impressive, creative exercise alongside a series of cultural performances.

Located just north of Bangalore in South India, the Drepung Gomang Monastery is one of three venerable institutions of Buddhist education and practice. Since its founding in the 15th century, the monastery has become internationally renowned as one of the largest monastic institutions in Tibet, housing more than 2,000 monks as of 2013.

For years now, Atascadero residents Anet and Charley Carlin have hosted the monks for their weeks-long tour, which includes traditional ceremonies, music, and dance, some of which will take place in collaboration with local Chumash tribe members.

SLO resident and author Robert Sachs has been involved with Buddhism since the early ’70s. Over the years, he’s studied in-depth with Buddhists, come close to the Dalai Lama, and written several books on the teachings and wisdom of Buddhism. This year, he has participated in the monks’ tour with a lecture at the Steynberg about the vague and mystical nature of mandalas. 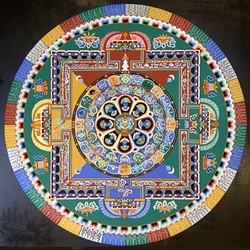 “Mandalas are in many ways visual meditation,” he told New Times over the phone. “There are things that you can meditate upon. They have their own, unique geometric structures which have a unique ability to calm and focus the mind.”

Indeed, the aesthetic effect of mandalas can be simple and calming, but to explain and describe them is as complex as their construction. At the most basic level, each mandala acts as an external representation of an interior space. They are “symbolic palaces,” layered with vibrant hues and maze-like designs. For this tour, the monks from Drepung Gomang are constructing three mandalas: the Green Tara Mandala, which symbolizes the female Buddha of compassion; the Chenrezig Mandala, which is also centered on compassion; and the Medicine Buddha, a manifestation of the Buddha of healing.

“They are a great benefit to the people doing it,” Sachs explained. “They help with learning focus; they have spiritual significance. In that regard, it is a benefit for them. But beyond that, for people that are witnessing them … they are seeing the masterworks.”

After the opening consecration, the monks begin creating the mandala by drawing a blueprint of the design’s ornate line patterns. This process can take at least three hours to complete, which is a snap of the finger when compared to the next step: the actual sand construction.

Using traditional metal funnels called chak-pur, the monks painstakingly pour millions of vividly colored grains of sand into complex patterns of doors, pillars, and florid embellishments. In order to fill the 5-foot-by-5-foot workspace, the enterprise can take anywhere from three to five days to finish.

So when the project is finally finished, it’s not surprising that the monks engage in another consecration ceremony. But what comes next is unexpected. They destroy it, leaving some of those millions upon millions of grains to onlookers and some to nature.

It almost seems cruel, to destroy a thing so delicate, labor intensive, and stunning. However, as the mandala is a physical representation of Buddhist thought, it adheres to one of the religion’s central tenets—the transitory nature of life. And like any piece of masterful art, the power of the mandala derives from more than just the finished product. It derives from its ability to help those involved, be they creator or viewer, better understand the many strange and unclear happenings of the human condition.

“Mantras work on helping you to access qualities like compassion or wisdom,” Sachs said. “Each mandala is the same thing. When you look at these, something inside you is accessed beyond what’s cultural. I have a DVD of mandalas that arise and dissolve on the screen. I’ve played it to large groups of people, and it makes people concentrate better. It calms children down. They really get into it, looking at this elegant pattern. You have these traditions that have been around that understand that and have taken advantage of our innate desire to know that peacefulness and happiness is a preferable state of mind than being nasty.”

Jessica Peña is in her mind palace. Shhh! You can contact her at jpena@newtimesslo.com.