Tiki me up, tiki me down

Central Coast resident of more than fifty years, Merrell Fankhauser, celebrates the tiki life in Arroyo Grande, and on your boob tube 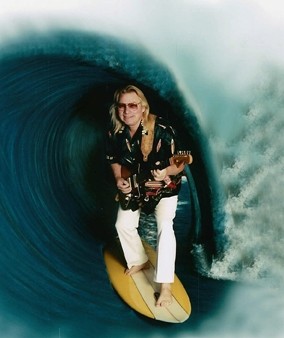 New Times How did you get a cable access show?

Merrell Fankhauser In 1991 I started doing a satellite show called California Music for two years. It reached 15 million viewers across the U.S. It was on 150 stations. I produced the show in Arroyo Grande on Channel 66. I called on all of my famous friends from the 1960s to be guests on my show: Mike Love of the Beach Boys, Dean Torrence, Jan and Dean. It snowballed from there. Then I worked on an album called Return to Mu. I didn’t want to do TV. I wanted to play music. Then I went to Hawaii and when I came back in 2001, Charter called me and said they had a new channel and they already had a time slot for me.

New Times Did you know at that point that you would do Tiki Lounge?

Fankhauser I wasn’t sure. I didn’t want to. I would have to travel all over, and that would take away from my music. So I told Charter no. But when I looked out at what is now the Tiki Lounge, my patio in Arroyo Grande, I saw my seven foot tall Samoan tiki out there, and I came up with the idea of Tiki Lounge.

New Times So you film the show at your house?

New Times I know you were born in Kentucky, and you’ve been back and forth between California and Hawaii several times. What drew you to the tiki culture?

Fankhauser My parents and I moved to the Central Coast in 1958. I went to A.G.H.S. In the mid-1960s I got several record contracts, so I moved to L.A. In 1971 I started studying about the lost continent of Mu.

New Times What is Mu?

Fankhauser They claim that the Hawaiian Islands were once up out of the water and they were all one island and it formed a larger land mass. They say a big upheaval happened 11,500 years ago and it sank back into the sea and now the mountaintops of the continent of Mu are the Hawaiian Islands. I became interested in that. In 1973 I moved to Maui and I lived there for 16 years. I read about the people of Mu, and what tikis meant, and how they were guardians, sort of. I played Hawaiian music while I lived in Hawaii, so it seemed natural to have a show and call it Tiki Lounge.

New Times What is your main objective on the show and who do you want to reach?

Fankhauser I have people of all walks of life and of all age groups come up to me and tell me how much they like the show. One elderly lady told me when her husband was very sick she would watch and it brought so much happiness and comfort to her. I try to make it for families. I have a whole set of hula dancers. Along with the Hawaiian vibe, I do rock ‘n’ roll too. I also interview my old musician buddies from the ’60s and ’70s, and new groups that I like. Putting out the laid back Hawaiian vibe, that aloha spirit, out here on the mainland. ∆

Christy Heron loves the Tiki Ti. Ask her where (and what) that is in Los Angeles at cheron@newtimesslo.com.