Wayward Baking is open to the public three days a week. Walk into the bakery at 1001 Santa Ynez Ave. in Los Osos on Saturday and Sunday from 8 a.m. to 1:30 p.m. Grab pizzas on Mondays from 4:30 to 7:30 p.m. Keep up with their timings and rotating menu on Instagram @waywardbaking.

While meandering the culinary landscape for more than 20 years, Los Osos resident Tim Veatch has had every imaginable restaurant job, barring that of a sushi chef.

"I think especially in the culinary industry, this path you weave trying to find your role is essential to learning but also to understanding your own style of food," Veatch said. "I think it takes an extraordinary amount of time and influence from other people to really understand what you're looking for and what you want to make and what your ideal flavors are.

"Those are definitive marks of anyone who operates, cooks, or creates food for other people to enjoy. Wayward is that journey for me." 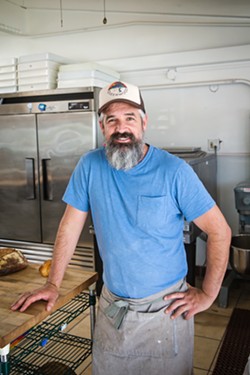 After spending roughly a decade in the Bay Area, Veatch arrived in Los Osos in 2015 and said he found a gap in quality baked goods and bakeries. In March 2018, he started Wayward Baking out of his garage as a pop-up, dishing out bread and pastries while working as a ranch hand at Traceland Organics in Morro Bay.

Veatch found that he couldn't bake enough to satiate Los Osos' sweet tooth. In November 2019, he signed the lease for storefront on Santa Ynez Avenue. But then COVID-19 came along a few months later and shut down Wayward for a while.

"This has been a process of navigating that wayward journey through the pandemic and figuring out if it was still going to be viable, and whether or not we're even going to survive, if this was something the community even actually needed," Veatch said.

The community came out in droves from all over SLO County. Like a lot of people, I heard about Wayward through word of mouth—from deep discussions with my housemate to small talk with my neighborhood barista.

"It's the best," they all said. Veatch thinks so, too.

"This is really where we're based and what I think we do best, especially in terms of something you just can't get anywhere else, and that's our laminated dough. We make a beautiful croissant. I challenge anyone to find a better one, especially in San Luis Obispo, if not, from Los Angeles to San Francisco. I will gladly put that piece of laminated dough against anyone else," he said. "I'm so proud of what we did."

Wayward's croissants are burnished mahogany confections available in plain, ham and cheese, and chocolate along with rotating seasonal flavors. The crust is flaky with a pillowy interior that resembles honeycomb. That dough also becomes seasonal cruffins (croissant-muffin hybrids) and sweet and savory Danishes.

Other sweet treats include meringues inspired by legendary chef Yotam Ottolenghi. Veatch learned how to make them when working at a restaurant in Larkspur called Farmshop and has since improved the methodology.

Inside Wayward on June 30, one of his bakers sprinkled a ruby-colored dust on pointy tufts of meringue. That's the raspberry and hibiscus flavor, Veatch said.

The meringue is cloudlike with a crispy top and a chewy floral center, cut by the sharp zing of raspberry dust.

"The flavors always change, and I try to keep them a little weird. We've run pistachio and rosewater, hazelnut and cacao, and next week will be strawberry lemonade," Veatch said. "We always try to make it the most fun it can possibly be, and challenge ourselves. The format stays the same, the flavors change."

The Wayward team also serves up sourdough, which appears in the house pizza and loaves of bread. The olive loaf, for instance, is crispy, crunchy, and studded with whole and halved olives.

Don't want an entire loaf? Get a sandwich. Veatch said his team's been recipe testing its Italian sandwiches for three months.

"I don't think there's a single thing I'm more excited for that we've made here. I can't believe we've gotten to the place where we're making these. They're a huge part of my journey," he said. "I spent about a year living in Italy. Basically, we're making what is the most simple sandwich you can get in Rome. It's made on what's called a pizza bianca, but it's a simple flatbread, it's cut very thin and use minimal ingredients. ... It's salty and sour and chewy but soft."

Pizza bianca isn't the only Italian connection for Wayward. The bakery opens the week with Pizza Monday—an event that exists purely out of love.

"Pizza's a passion. The reason why Pizza Mondays exist is that I love pizza. That's it," he said. "It's sourdough pizza so it's ever-changing. ... It's true European-style pizza, so not a ton of toppings. ... It's something that I learned while I was in Italy, it's something I refined while working at different restaurants. I wish we could make them in a wood-fired oven, we don't have that."

Navigating a professional kitchen devoid of a wood-fired oven is one of the few technical challenges Wayward's bakers solve every day. Their oven can only bake 24 loaves of bread at a time, which limits them to 100 loaves a day. Further, it takes an hour to bake each batch, and another hour to heat back up for the next set. But Veatch thinks such hurdles bought Wayward more time for beta-testing as a small business recovering from the pandemic. It also sharpens his staff's baking skills.

"It's a challenge every single day, and these guys get up and meet that challenge with me," he said.

Veatch's staff works with sustained diligence. Take his baker Levi, who walked into Wayward as a 16-year-old fresh from a trip to France with his parents. He thought the bakery's kouign-amann (another laminated dough creation) was the best he had since his French vacation, and he wanted to learn how to make them. Veatch showed him a few recipes online and sent him on his way.

Weeks later, Levi returned with a new request: He wanted to work for Veatch. He started out washing dishes every weekend before slowly training and becoming a full-time baker throughout his summer break. He will return to high school for his senior year this fall, but Wayward has left a lasting imprint on the teenager.

"My wife teases me all the time because he wanted to be a doctor before he came in here. She said, 'You're ruining his life.' I said, 'I know, I know.' He's talking about going to Cornell for their hospitality," laughed Veatch. "He's got a true passion for it, and it's absolutely incredible watching him grow."

While Wayward still caters to areas beyond Los Osos, Veatch still feels the pull of the coastal town and returns the loyalty of his solid customer base with gratitude and a constant push to maintain baking quality.

"It's the one thing that lets me know that I'm doing the right thing and the effort is worthwhile, that the folks here appreciate us. Not only do they keep coming back but they keep getting up in the morning," he said. "When people give me the compliment of, 'Your stuff is great,' or 'I gave this to my friend,' that's the thing I'm the most proud of and dying to improve upon.

"I think that they deserve nice things, and I want them to have it, and to be an establishment that can do that for them means everything to me." Δ

Staff Writer Bulbul Rajagopal is fixated on chocolate croissants. Distract her at brajagopal@newtimesslo.com.