Holey-moley, what a year! Remember that thing that happened? And how about that other stuff? Whether the events of 2011 inspire an urge to celebrate, the need to forget it all and start over, or neither, there sure are plenty of ways to ring in the New Year on the Central Coast, and most feature live music.

The Sanitarium Spa, Bed, and Breakfast is hosting a real humdinger in SLO’s railroad district on Saturday, Dec. 31. Billed as an intimate celebration for music lovers, the event is headlined by guitar virtuoso Eric Henderson, a classically trained musician whose influences range from Jimi Hendrix and the Rolling Stones to Beethoven and Bach. He began playing guitar at age six and is one of just three people in the world to study under the Spanish master Andrés Segovia. Bottom line, this guy makes the strings sing! 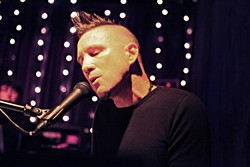 The event starts at 5 p.m., and the $20 ticket includes a barbecue meal and the evening’s first drink. Call 544-4124 to get yours, and call quickly, because space is limited.

Sometimes there’s no better way to celebrate the coming year than with a look to the sounds of the past. Go that route with Yo Pitzy Jug Band! Founded by two brothers and a son, the band writes songs with themes of family, adventure, and freight trains set to early string band tunes. They’re playing at the Red Barn in Los Osos for a pot luck New Year’s Eve party that starts at 5 p.m. Tickets cost $10 at the door. Call 528-4530 for details. 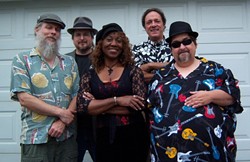 For those who want to rock on New Year’s Eve, the South County has it covered with the down and dirty sounds of Dr. Danger, a local favorite that won a New Times Music Award in 2011 for best R&B/Blues recording. Their concerts feature a healthy mix of recognizable covers and original grooves, and a dancing good time shall be had at SLO Down Pub in Arroyo Grande from 7 p.m. to midnight. Call 481-4067 for more information.On the North Coast, The Cadillac Angels serve up a similar experience with plenty of raw blues and booze at The Otter Rock Café in Morro Bay. Their sound is more stripped-down and guitar driven, a steady rhythm with smokin’ melodies. It’s not the best for dancing per se, but it’s fitting music for a laid back party at the local bar. There’s no cover, and the concert starts at 8 p.m.

If it’s dancing you desire, don’t fret. DJs are swarming on the Central Coast Dec. 31, giving club heads a couple of fine options for that freak dancing the kids do these days. 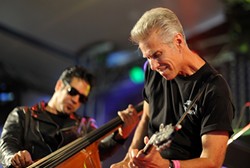 The Graduate is bringing Oakland based rapper Bobby Brackins to their “Party for the Ages.” Brackins has been packing houses all over everywhere with his bass-heavy tracks and over-the-top party lyrics. It’s easy to hear how his songs could be popular, if you’re into that kind of thing, but the lyrics are objectively awful and sexist. He’s a real crass act.

This particular party also features DJs from Wild 106, a balloon drop with cash prizes, and We Own the Night Entertainment capturing the debauchery in photographs. It costs $20, starts at 9 p.m., and should be a pretty good time actually.

Another option is “Riise: a New Beginning.” This New Year’s party at Z Club is just crunchy with dub step, trance, and house music. Expect lots of bass, starting with a set by beat mixologist Michael St. Patrick at 6 p.m. Then there will be more, bouncier bass, when DJ Bad Donkey and Jason Lytle join forces at the turn tables. Had enough bass? Didn’t think so. DJ Jose Madre finishes the night with another round of throbbing bassidity. Tickets to this affair cost just $5, and Z Club is located at 2010 Parker St. 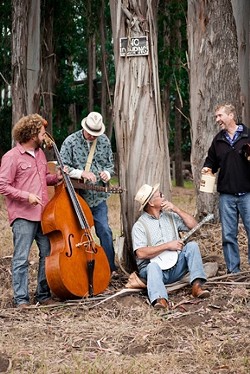 In Morro Bay, DJ KatchaFiya spins, scratches, and bumps in the night on New Year’s Eve. This guy adds a little reggae flavor to a mix of hip hop and top 40 tracks that’s sure to shake things up a bit. He’s performing at The Buoy, starting at 9 p.m. and going strong. All. Night. Long. Call 772-7000 for details.

The week in music begins with Meet the Foppers, a father/son team of guitar maestros that bring their jazzy skills and lively sounds to The Porch in Santa Maria. The show starts at 6:30 p.m. and will be hosted by Craig Luis Dingman.

Florida native Alice Wallace starts the New Year with a new tour that kicks off in Paso Robles on Sunday, Jan. 1. She’s promoting her new album, Sweet Madness, an eclectic arrangement of folksy country tunes, with bits of jazz and pop that highlight the singer’s rich voice. She’s playing at Sculpterra Winery at 1 p.m. In the spirit of new beginnings, a challenge was sent out to local songwriters to craft a new song for the New Year, and Craig Luis Dingman, Mike Swan, and Charles Motley will perform the results as part of this showcase. 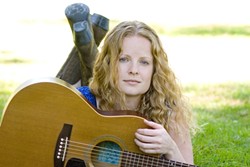 Enjoy a night of sex-charged, angst-ridden electronica on Monday, Jan. 2. A founding member of Atari Teenage Riot, Hanin Elias blends punk attitude and shocking, political lyrics with experimental techno music at Z Club. The result is a boundary defying sound that mesmerizes as much as it tantalizes. Violent Vickie, an equally provocative group based out of San Francisco, also performs. The show starts at 9 p.m.

New Times reached out to several local record stores to get their thoughts on the defining sounds from the last 12 months. Many were too busy with holiday what-nots to write anything, but the saints at Cheap Thrills and Boo Boo Records were kind enough to review the best recordings of the year.

“There have been a number of incredible albums for me this year.  Susan Tedeschi’s and Derek Truck’s combined band put out Revelator. The Decemberists released The King is Dead and the follow-up EP Long Live the King, but for me, the stand out artist was Joe Bonamassa who released three albums in 2011.  The blues guitarist released his second effort with the rock band Black Country Communion, an album of classic blues with vocalist Beth Hart, and his own album, Dust Bowl. His soaring guitar and soulful vocals on this last album will appeal to fans of Eric Clapton and Stevie Ray Vaughan, but rather than re-treading the past, he is taking the blues into the future.”

“The thing is, when you’re surrounded by piles of CDs and rows of vinyl, the album that strikes you the most tends to sound different from its contemporary companions.  In a year thick with acoustic rock (Fleet Foxes, Bon Iver, Ryan Adams) and jarringly brash to off-center electronica (Araabmuzik, James Blake, Skrillex), few things sounded like Destroyer’s Kaputt.

“Behind his moniker, Daniel Bejar eschews his previous chamber pop for the synthesizer seduction of Thatcher-era ‘80s. Falling somewhere between the shimmering jazz pop of Prefab Sprout and the ambient textual orchestration of Talk Talk, Destroyer did the impossible, and made the ‘80s sound dignified. And that’s even with a blast of sleazy saxophone solos recalling your father’s Dave Koz collection. Kaputt mines the convergence of light electro-funk and stately adult contemporary pop, sounding equally like a late night burner and an early morning recline. It’s as slick as Bryan Ferry’s hairdo but with enough bottom to acknowledge his self-described ‘ambient disco.’

“Lyrically, Bejar can be puzzling and ambiguous. Sitting down with the lyric sheet gleans no more meaning of the songs than a weathervane would. But his Bowiesque voice still enthralls, and with the layers of shimmering synthesizers, ambient tones, and saxophone solos that recall the ‘Careless Whispers,’ he manages to coalesce these often-ridiculed parts to create something greater than its sum: a shining pop masterpiece.”

Calendar Editor Nick Powell compiled this week’s music column. He can be reached at npowell@newtimesslo.com.