Each year of college can be a fresh start, a blank slate. In keeping with that tradition, Cal Poly decided to give its fraternities and sororities a chance to redeem themselves this fall following a disastrous spring.

Cal Poly announced on Sept. 6 that it had lifted the interim suspension placed on all 27 of its Interfraternity (IFC) and Panhellenic Council organizations, a punishment levied in April amid fallout from a series of racist and highly publicized Greek incidents. 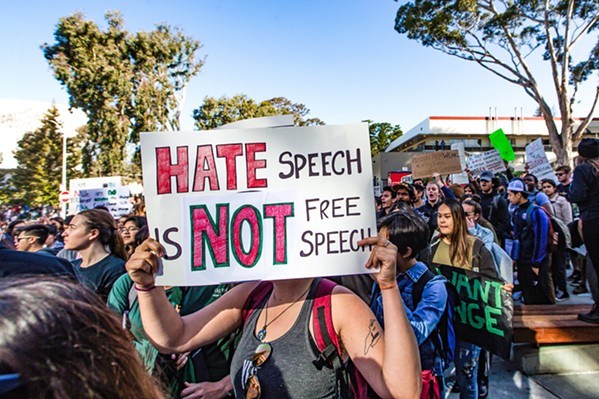 Incidents included a white Lambda Chi Alpha brother donning blackface at a frat event, three Sigma Nu brothers photographed dressing like Hispanic gangsters, and another photo of a white student in blackface—mocking the first incident—that was posted to a fraternity Snapchat thread.

Cal Poly spokesman Matt Lazier said the blanket Greek suspension was meant to give Greek groups "the opportunity to step back, examine their organizations, and develop specific educational plans for how they will make diversity and inclusion a fundamental part of the fabric of Greek life."

Since the suspension took effect, Lazier said every IFC and Panhellenic chapter submitted "inclusion plans" to administrators and established a diversity and inclusion officer position within their organizations.

"With this progress made, the temporary interim suspension has been lifted," Lazier said. "Greek life organizations will continue to work with student affairs leadership to enhance, refine, and implement these plans."

Lazier added that Cal Poly "continues to develop plans for the coming academic year to keep diversity and inclusion top of mind for Greek life community members, including a variety of guest speakers and regular training opportunities."

Lambda Chi Alpha will remain on probation until spring 2019.

The events of last spring sparked both local and national attention and outrage. Hundreds of students boycotted and protested Cal Poly Open House events, many called for President Jeffrey Armstrong's resignation, and students convened emotional town hall-style meetings to air their frustrations about Cal Poly's culture and lack of diversity.

While declaring his decision to temporarily suspend Greek life, Armstrong stated that fraternities and sororities would "not have a place at Cal Poly ... until all [chapters] are conducting themselves in a manner that is respectful of all students."

"Greek life is a privilege at this university," Armstrong said. "If Greek life is to remain at Cal Poly, these students must reinvent their organizations and activities so they add value to our campus community and foster a culture of inclusion instead of undermining it."

Just days later, when university officials became aware of the second photo of a student in blackface in early May, Armstrong announced that he'd asked the State Attorney General's Office to investigate the incident. The State AG's Office has made no public statements on the matter since.

"These vile and absolutely unacceptable acts cannot continue. We must not allow these acts to define us as an institution," Armstrong told the campus community on May 4. Δ